Najin and Fatu seem unaware they’re the last of their kind. Scientists hope they can add just one more per year. 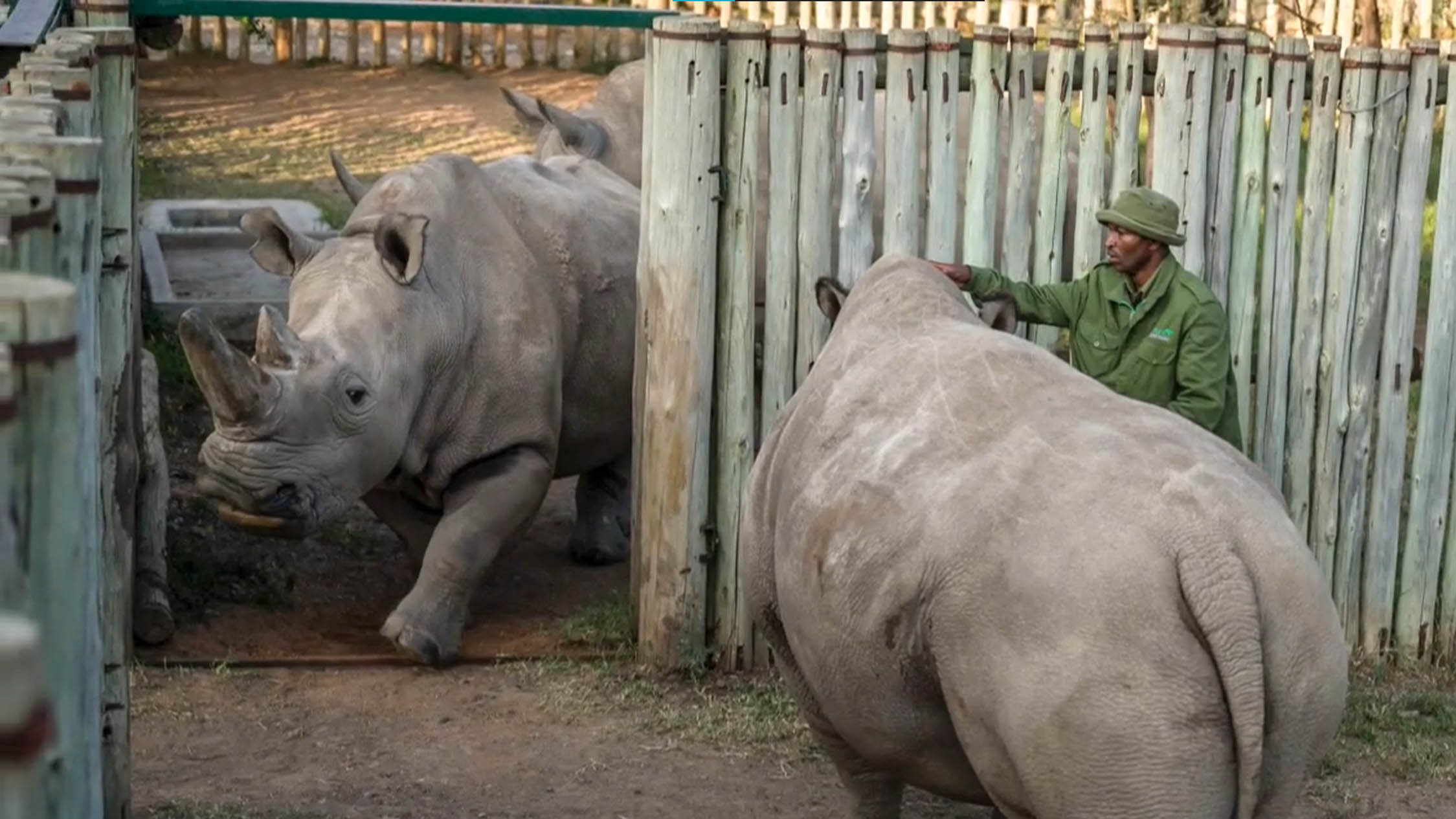 Najin and Fatu, the last two northern white rhinoceroses in the world live in a conservancy in Kenya under the watchful eye of armed guards. This is a screen capture from video shot at the Ol Pejeta Conservancy on an unknown date. (GeoBeats)

NANYUKI, Kenya — The last two northern white rhinoceroses in the world live near Nairobi, Kenya where they armed guards from the country’s anti-poaching police force protect them 24 hours a day.

Najin and Fatu graze through savannah grasslands in the 140-square-mile Ol Pejeta conservancy. The two females don’t seem aware that they’re the last of their kind, even though the last male, named Sudan, died in 2018. He was their father.

He had a brief global spotlight a year earlier when the conservancy partnered with Tinder to show fundraising ads featuring him as the world “most eligible bachelor.” the stunt raised millions of dollars for conservation.

“I’m one of a kind,” Sudan said on his Tinder profile. “No, seriously, I’m the last male white rhino on the planet earth. I don’t mean to be too forward, but the fate of my species literally depends on us getting together.”

Zachary Mutai has been caring for the female pair for 10 years. He describes Najin, who just turned 31, as playful but also quite pushy. She often gets what she wants in what qualifies as old age, he tells Zenger News.

“It is an achievement because most of the rhinos in the world don’t live this long, but she has more than five years to live in great health,” says Mutai, a father of five.

“It is interesting and at the same time challenging,” Mutai says as he feeds the rhino pair. “Knowing that the life of a species depends on you—is quite a task.”

Animals far outnumber humans in this bushy conservancy. Najin and Fatu are the only white rhinos, but other species roam the 90,000 acres along with hundreds of zebras, giraffes, cheetahs, leopards, wild dogs and gazelles. Six dozen lions rule them all.

The northern white rhinos have wide mouths designed for grazing short grasses. Their sturdy bodies weigh up to 4,500 pounds.

They’re also playful and personable. “We refer to them as girls,” says Samwel Mutisya, the chief conservation biologist at Ol Pejeta. “We definitely have more regard for them than an ordinary animal roaming across the plains.”

At the turn of the 19th century these lumbering pachyderms roamed Central Africa in numbers estimated in the hundreds. Poachers are lured by the black-market value of their horns, highly valued in Asia for what some believe are their aphrodesiac qualities. They have been spotted killing rhinos by slicing off the horns and leaving them to bleed to death.

Sudan was captured as a two-year-old calf in his namesake country and grew up at the Dvůr Králové Zoo in the Czech Republic, where he fathered Najin in 1989 and Fatu in 2000.  To encourage more breeding, the trio were relocated, along with a second male named Suni, to the Ol Pejeta Conservancy.

“Scientists believed that there was a critical population that would promote breeding,” says Mutisya. “There was also enough pasture as well as the availability of other rhino species that would orient the new animals to the wild.”

It didn’t work. Suni, the other rhino bull, died before he could mate. Sudan was getting to old to try.  And the two females had medical issues.

Years at the cold zoo left her with bent legs and a permanently altered posture that meant she could not carry a pregnancy to term. And veterinarians found that Fatu, the younger sister, had a problem with the lining of her uterus.

In vitro fertilization may succeed where nature hasn’t. Scientists collected sperm from Sudan, a parting gift before he was euthanized.

Mutisya called that decision a painful one, but says that “the sperms which we have stored in the lab gives us hope that one day we can successfully develop an embryo that will rejuvenate a species.”

Scientists harvesting eggs from Najin and Fatu in December 2019 and flew them to an Italian lab that is overseeing the process. Out of 19 eggs, scientists have managed to create three embryos. They hope to plant them in the womb of a surrogate southern white rhino, a similar species with a stable population.

“Unless science progresses further with stem cell research, this is the only hope we have,” says Mutisya.

His goal is to ensure there is an active population of northern white rhinos in the Congo and Central African region.

“They are as important now after harvesting the eggs as they were before,” he says. “The aim is to have at least 20 animals in 20 years, which then can be able to sustain growth—of course, with human intervention.”

He describes an elaborate and meticulously watched regimen that ensures Fatu and Najin are safe and healthy. This includes hourly checks for behavioral changes, physical appearance and nutrition. The data is shared in real time with a community of rhino researchers and conservationists across the globe.

They know her ovaries are likely just a few years away from drying up. But Fatu is in her prime, ready to supply half of the ingredients for more northern white rhino embryos.

Emilio Gichuki, the police commander overseeing the rhinos’ security detail, says guarding Najin and Fatu is challenging, but the last “active poaching incident” at Ol Pejeta was three years ago. Since then cameras and GPS trackers help his squad do their job.

“We go to extra lengths to ensure the lives of these two rhinos are secured,” Gichuki said.

«Previous Post
But What Is That in Human Years? 20,000-year-old Remains of a Dog May Be the World’s Oldest Pet»Next Post
Tasmanian Angel: Baby Wallaby Takes a Peek from its Pouch