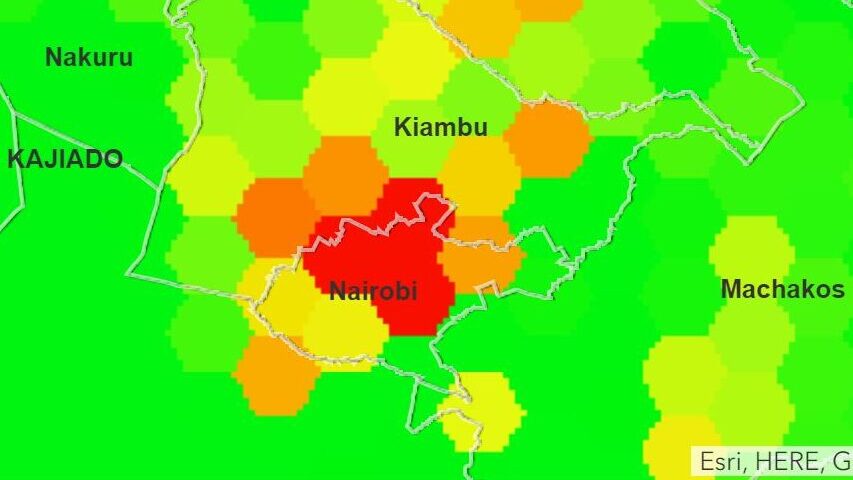 A data science non-profit in Kenya is using location data from people's cellphones and a brief questionnaire to gauge their Covid-19 risk and generate maps that show emerging and current disease hotspots. (Women in GIS Kenya)

A group of female data researchers are providing the tech and data muscle behind digital tools the Kenyan government uses to track and contain Covid-19.

Women in GIS Kenya (WiGISKe), a geospatial technology non-profit, partnered with the country’s Ministry of Health, the World Health Organization and Jomo Kenyatta University of Agriculture and Technology to create an online database and the tools to keep it updated. It tracks the number of cases, recoveries and confirmed deaths across the sub-Saharan nation, plus a tally of testing.

Using cellphone GPS data based on people’s physical locations, the website creates maps that show emerging and current disease hotspots. A questionnaire helps Kenyans determine if they need to seek medical attention, using their physical location as a starting point to dispense advice.

WiGISKe chief executive officer Yariwo Kitiyo said he group created “an online Covid-19 self-test that asks a series of questions to individuals to determine whether they are experiencing Covid-19 symptoms.”

“The tool collects location information, classifies risk level and provides a list of nearby health facilities based on the spatial location for severe and high-risk cases,” Kitiyo said, describing what scientists call GIS—Geographic Information Systems. 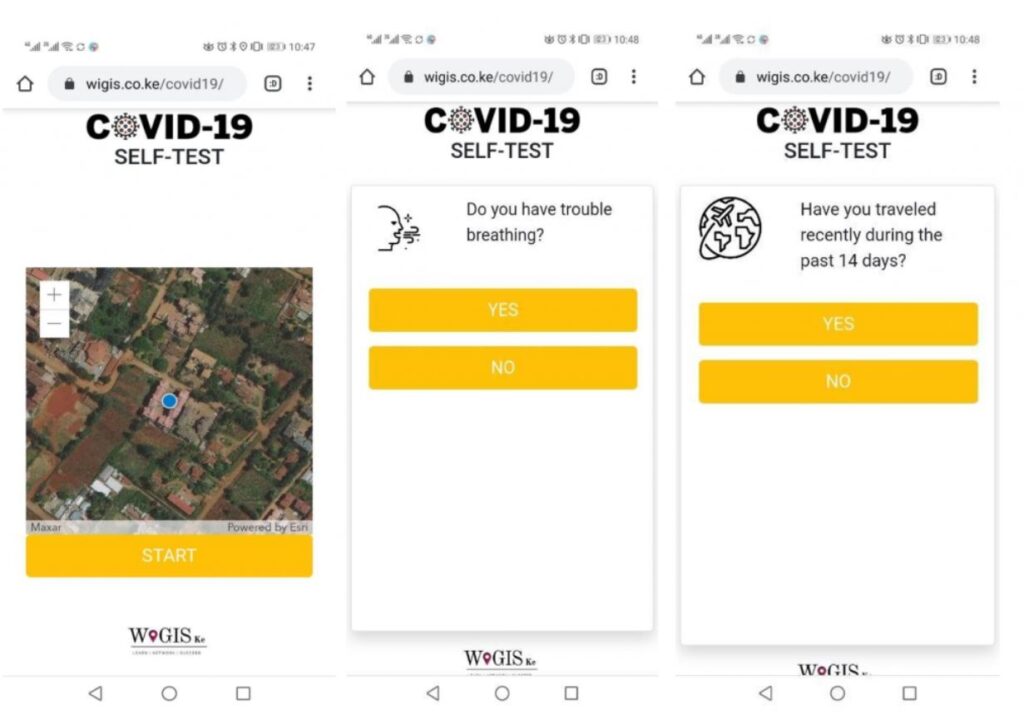 The online hub helps Kenyans avoid what the WHO has called an “infodemic”—the overload of information, both accurate and wildly false, that makes it difficult for many people to find trustworthy news sources. It also helps government agencies allocate resources.

“Location information is critical to the decision-making process associated with large disease outbreaks,” said project manager Pauline Okeyo. “GIS is critical in answering many infectious disease-related questions such as: Where are current cases in the community, and where will the virus likely spread? Do we have schools in socially vulnerable areas? Which neighborhoods are distant from a testing site? Do we have communities or specific population demographics that are at higher risk? Which facilities and staff are in harm’s way?”

“I first heard about the test when a friend of mine sent me a link via WhatsApp,” said University of Nairobi law student Cecelia Wanjiru. “I was curious, so I took the questions, which were very simple to answer. … I think this may play a huge role in marking the number of cases in an area.”

James Ngige, an information technology worker at the Kenya Revenue Authority, took the test after a friend texted him a link. “I found it innovative, especially in the current circumstance, and the fact that the application is web-based, which is great because one does not have to download it,” said Ngige.

The site can anticipate future outbreaks by displaying a nationwide “risk map” based on population density, age demographics and even factors like the prevalence of smoking.

Ministry of Health spokesman Onesmus Kamau credits the data scientists for helping the country keep its death toll comparatively low. The most recent official count is 35,460 confirmed cases and 607 deaths as of Sept. 10.

“The online assessment test created by Women in GIS has been fundamental in locating areas with increased cases and predicting high-risk zones in response preparedness,” said Kamau.

Along with providing the Kenyan government a model for policy decisions, the all-female team has also served as role models for women thinking of entering the traditionally male-dominated tech sector.

“Societal norms and upbringing have led many to believe that their male counterparts can only do science and technology,” said WiGISKe technical director Sophia Njeri Murage. She cited “buying engineering toys such as cars and building blocks for boys, and dolls and cooking toys for girls” as one way that starts.

“I am not saying this is wrong,” Murage said. “However, it triggers a shift in the mindsets of many children of our ‘roles’ in society.”