Study: Much Shorter Course of Drug Therapy Is Effective for Some with Early-Stage Breast Cancer

A short course of the drug in Herceptin is just as helpful as long-term use, for many women in the disease’s early stages. 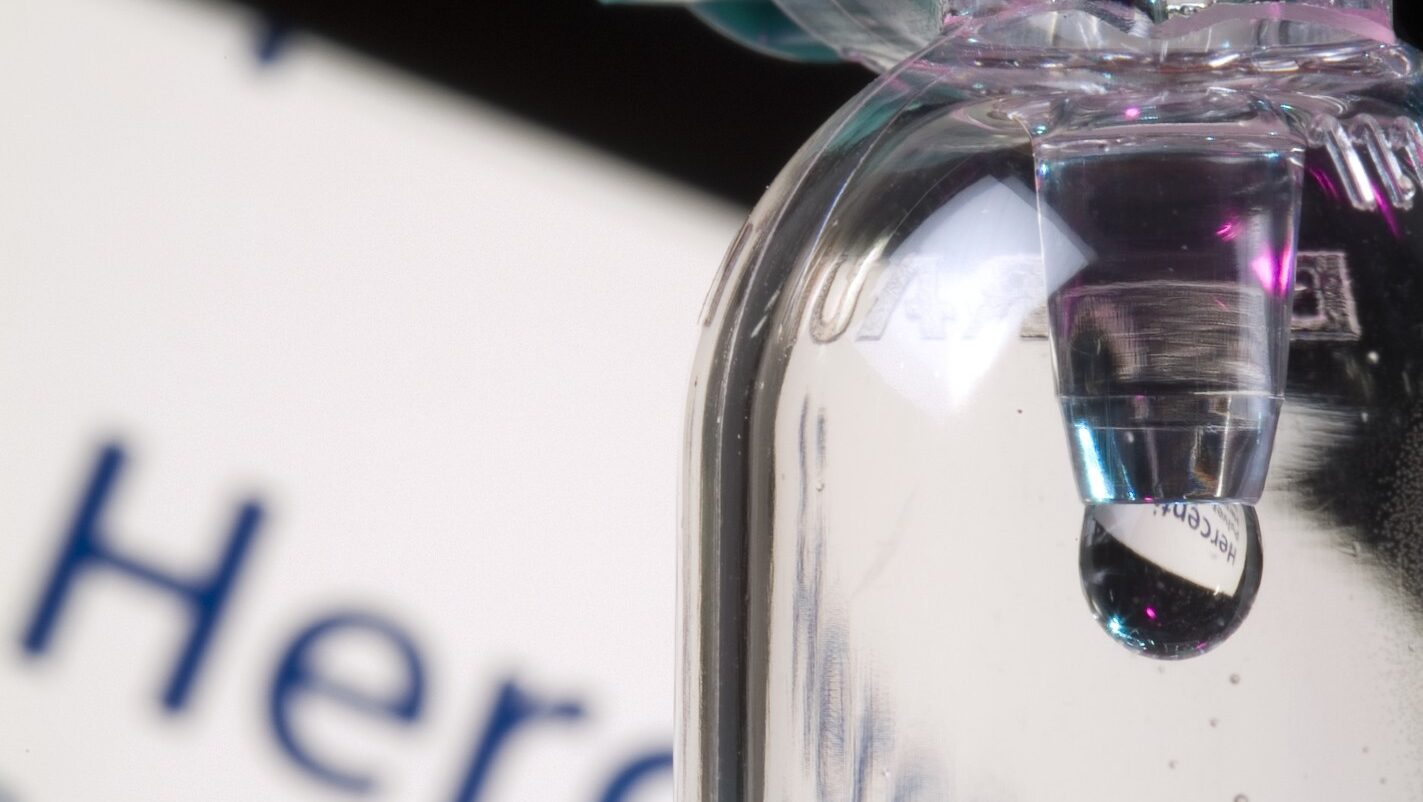 Drops of a solution containing the breast cancer drug Herceptin are shown flowing into an intravenous tube to treat a patient in this undated photo (Beat Ernst/F. Hoffmann-La Roche Ltd.)

One in five women suffering from breast cancer has a particularly aggressive, rapidly growing HER2-positive type of tumor. And usually, surgery, chemotherapy and/or targeted year-long therapy are the available treatments.

But now a study conducted by experts from India’s Tata Memorial cancer research institute indicates that a shorter, targeted therapy ranging between three and six months is “non-inferior to its one-year administration with respect to DFS [disease-free survival] with fewer cardiac toxic effects.”

The study was published online Aug. 24 in the Journal of the American Medical Association. Breast cancer is the most common type of cancer in women.

“Addition of the targeted therapy has definitely shown improvement in the survival of HER2-positive breast cancer patients,” said Dr. Seema Gulia, a professor of medical oncology at Tata Memorial Centre and one of the authors of the study.

The findings from the study could play a crucial role in reducing both patient costs and the trauma of prolonged treatment.

Tumors that test positive for a protein called human epidermal growth factor receptor 2 are known as HER2-positive. The targeted therapy drug for this type of aggressive breast cancer is Trastuzumab (known by its brand name Herceptin), a monoclonal antibody.

“Typically, injection Trastuzumab is introduced when the patients are in their fifth cycle of chemotherapy and it is administered for a year as a standard,” said Dr. Sudeep Gupta, the corresponding author of the study. “All the initial studies evaluated the use of this drug for one year, barring one small Finnish study which looked at a nine-week-long therapy. Therefore, by default, one year became the standard duration of adjuvant Trastuzumab. Our meta-analysis will not only help in reducing the duration of treatment, but also the costs and side effects involved.”

“We carried out an independent patient data analysis by combining the data, which was extracted from five different studies,” said Sadhana Kanan, a biostatistician at Tata Memorial Centre and a co-author of the study. “These studies looked at the effects of a shorter regimen of Trastuzumab compared to one-year treatment”

The study found that shorter therapy was not inferior to the longer course, and showed lower rates of cardiac toxic effects.

“In 2018, it is estimated that 627,000 women died from breast cancer—that is approximately 15 percent of all cancer deaths among women,” the WHO states. “While breast cancer rates are higher among women in more developed regions, rates are increasing in nearly every region globally.”

Nearly 25 percent of all breast cancers are HER2-positive, the target of the Tata Memorial study.

“Although adjuvant Trastuzumab has been the standard of care for ERBB2-positive [HER2-positive] early breast cancer since 2006, its optimum duration has been uncertain. In particular, it has been a matter of interest to know whether durations less than one year would preserve the therapeutic effect of one year of Trastuzumab while lowering the cardiac toxic effects and cost of treatment,” the Tata Memorial Centre experts’ study states.

“Our study highlights that a shorter, targeted therapy (three to six months) is not inferior to one year of treatment in terms of survival,” Dr. Gulia said. “More importantly, Trastuzumab has been associated with cardiac complications in a few patients. By reducing the duration of treatment, the risk of cardiac toxicity in patients also goes down.”

The study has observed that “the proportion of patients developing congestive heart failure was lower among those receiving shorter duration of Trastuzumab compared with those receiving it for a year.”

Patients undergoing treatment for a longer time spend more and may also suffer from anxiety and fear of job loss.