Dolores Huerta: Sí, Se Puede, Together We Can Build a Better Future

Americans celebrated the 100th anniversary of the ratification of the 19th Amendment, which guaranteed women the right to vote. 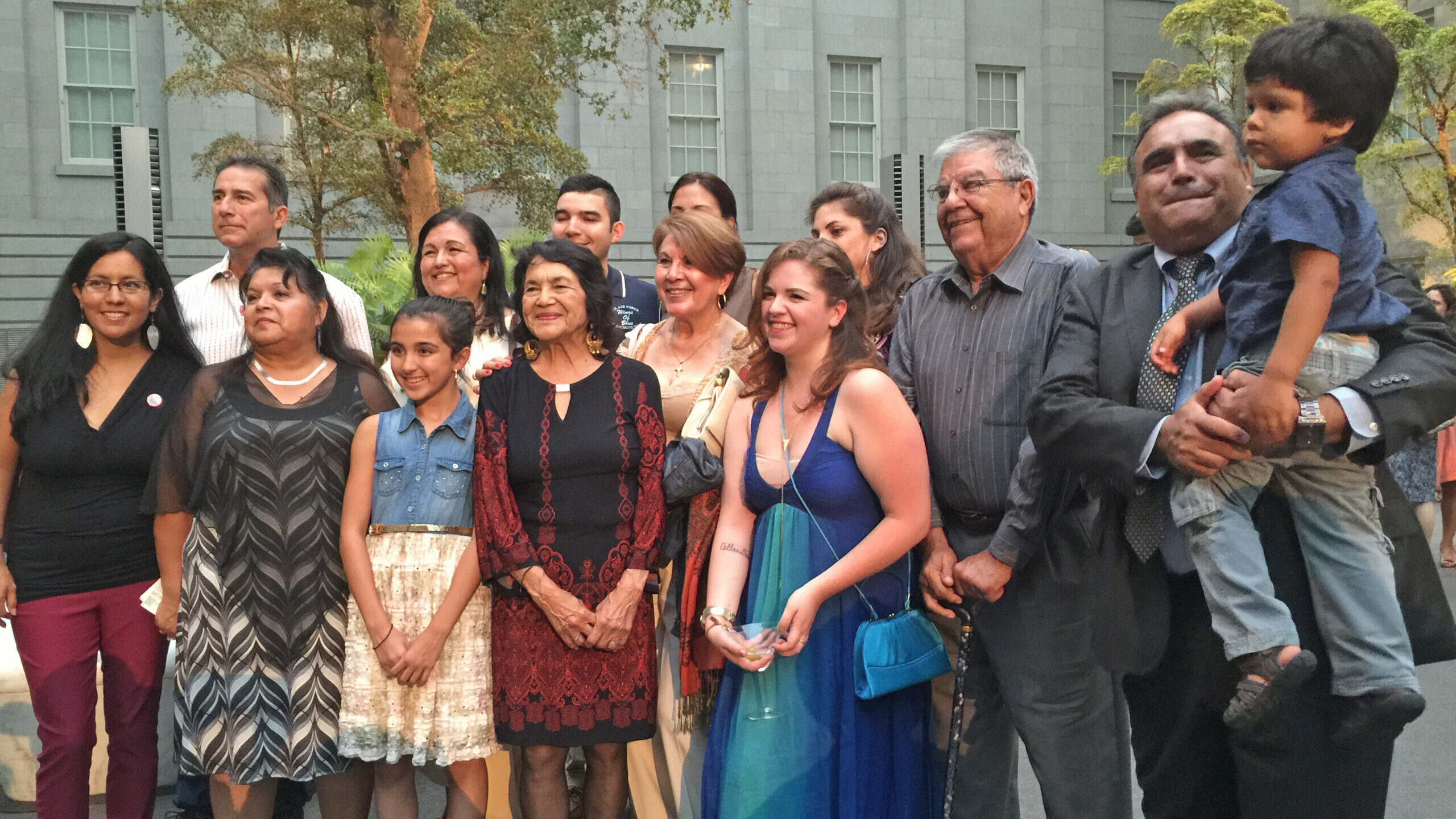 Dolores Huerta and her family on July 1, 2015. (Aileen Roberta Schlef/Zenger)

Dolores Huerta, founder and president of the Dolores Huerta Foundation (DHF) and co-founder of the United Farm Workers (UFW), has been a cornerstone of American social change for decades and is a venerated icon to Latinos, feminists and labor union members. She is the subject of Mexican-American corridos folk songs and murals. Streets, schools and plazas carry her name, and in California, her birthday is celebrated as Dolores Huerta Day. In the Latino community, she is simply “Dolores.”

The labor leader and civil rights activist, who fought alongside César Chávez, will become a 2020 Ripple of Hope Laureate in December, alongside Anthony Fauci and Colin Kaepernick, in honor of those who “reflect Robert Kennedy’s passion for equality, justice, basic human rights, and his belief that each of us can make a difference.”

“I can look back to the time when I was a teenager and had to grow up with a lot of racism and sexism. I can look back and see the changes that were made,” Huerta said.

In 2012, President Barack Obama awarded her with the Presidential Medal of Freedom, the nation’s highest civilian honor. The president graciously thanked her for allowing him to translate and use her historic and inspiring rallying cry, “Sí, Se Puede,” as his 2008 presidential campaign slogan, “Yes We Can.”

In 2017, the critically acclaimed documentary “Dolores” chronicled Huerta’s life from her childhood in Stockton, California, to her early years with the UFW, including the headline-making grape boycott of 1965 and her activism within the feminist movement of the ’70s.

Her determination to organize for nonviolent change was driven by the injustice she witnessed around her: As a college student, Huerta remembers Latino friends at college who changed their names to avoid discrimination, and as a young schoolteacher, she was deeply affected by administrators who looked away when Okies (refugee farmworkers and their families from the Southern Plains) and poor children came to school hungry and in need of basic items like shoes.

She spoke up, but no one listened.

She emerged as a fearless and skilled organizer and lobbyist. With ease, she packed hundreds into legislative offices to advance desired measures and regulations; her instinctive negotiating skills drew attention far and wide.

During her time at CSO, Huerta was introduced to César Chávez, and by the early ’60s, they were organizing in the fields, spearheading a movement that captivated the nation.

For the first time, the UFW brought critical issues such as decent pay, health care and protection against poisonous pesticides to the table. As the first woman to sit at the negotiating table with agricultural corporate leaders, Huerta succeeded in getting growers to agree to the nation’s first farmworker contracts.

Their historic boycotts of grapes and lettuce captured public attention, attracting the support of young activists, prominent families and civic leaders across the country, including Senator Robert F. Kennedy, who became a lifelong friend.

“(Dolores is) the real McCoy, a tireless, smart and generous idealist (who is always available to assist),” said Smeal. “She has done so much for women’s rights, supporting women to get involved throughout the decision-making process.”

As an active foundation board member of the Feminist Majority Foundation, Huerta is building efforts toward the empowerment of women worldwide through modes of economic, political and social equality, while also increasing Latina engagement in those efforts.

In her time as an activist, Huerta has been severely beaten, arrested more than 20 times, and spent a significant amount of her life on the road. Family and community support made her travels possible, if not easy.

Eventually, her 11 children became early organizers and joined the picket lines. Today, many of them work in the service sector, with some sharing in the work of the Dolores Huerta Foundation.

At 90, Huerta continues to lead on the front lines.

Forced to abandon her typically relentless travel schedule due to the COVID-19 pandemic, she is working from home. Her 12-hour workdays focus on the DHF’s efforts to pass the Health and Economic Recovery Omnibus Emergency Solutions (HEROES) Act, proposed legislation for a $3 trillion stimulus package in response to the pandemic and benefitting those who have lost their jobs.

“All of us have to vote. We have to contact our legislators and tell them that we want them to vote the right way on so many of these issues as the HEROES Act. That is really the power that we have as individuals. We need to find our voice and speak up. It is so crucial,” said Huerta.

The DHF focuses on improving education, civic engagement and youth leadership development and is the embodiment of Huerta’s life’s work: To empower those without resources to take the lead in building community assets with the strength of collective action.

The DHF also plans to establish a multicultural center, The Dolores Huerta Peace and Justice Center, in Bakersfield, California. A capital campaign is currently securing funds.

The center will honor Huerta’s legacy and the contributions of immigrants and San Joaquin Valley residents, telling the stories of Native Americans, African Americans, Chinese, Filipinos, Japanese, Mexican Braceros, Okies, Indo-Americans and the farmworkers who have made tremendous contributions to California’s rich agricultural economy.

Hilda L. Solis, a former member of Congress, the first Latina to serve in the U.S. Cabinet and the First District County Supervisor of LA County, recalls being captivated by pictures of Huerta holding up the “HUELGA (STRIKE)” sign and seeing her on stage with Robert F. Kennedy.

“She has, for more than half a century, advocated for nonviolent protest and has taught people that they have both the personal power and the responsibility to work together to improve their lives,” Solis said.

In these discouraging times, Huerta offers words of advice: “We have to keep moving forward. We cannot give up. I can look back and see the changes that were made because people fought for those changes. Things have improved; we still have a long way to go. We have already seen an awakening with protesters marching now because of racial injustice and police misconduct. Keep perspective. We have to ride this out together.”