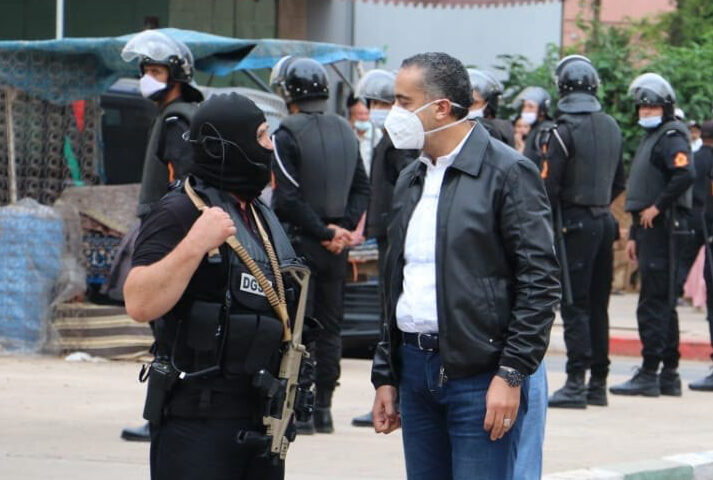 Moroccan Director General of National Security Abdellatif Hammouchi speaks to a member of a strike team in an unspecified neighborhood near the Moroccan capital city Rabat following a raid on Sept. 10, 2020. (Kingdom of Morocco)

The radical Islamist group previously shared personnel with Al Qaeda and ISIS, according to intelligence officials. Nearby Rabat, the capital city, is home to Morocco’s elected parliament and the primary residence of King Mohammed VI–tempting targets for terrorists.

The simultaneous raids took place on the outskirts of Rabat in the towns of Temara, Skhirat and Tifelt. Some Moroccan broadcasters reported a fourth raid in Tangiers, in the north of the country.

Bearing automatic carbines and pistols, the black-clad security services gathered before sunrise and the morning call to prayer on Sept. 10, bursting into the suburban homes before the suspects rose for their ritual pre-dawn foot-washing and prayers facing Mecca.

“The country continued to face sporadic threats, largely from small, independent terrorist cells, the majority of which claimed to be inspired by or affiliated with ISIS,” according to the U.S. State Department’s website.

Abdellatih Hammouchi supervised the covert operation. He is the director of both the General Directorate of Territorial Surveillance and the General Directorate of National Security. He appears in a photo nearby, which the government supplied to Moroccan news outlets. In the photo, Hammouchi is seen discussing tactics with one of the assault teams.

U.S. Secretary of State Mike Pompeo met with Hammouchi in Dec. 4, 2019, in Rabat, to discuss counterterrorism and law enforcement cooperation.

Precisely timed and carefully choreographed, Morocco’s leading counterterrorism unit executed the operation with no deaths or injuries among security forces, suspects or bystanders.

These raids build on previous counterterrorism victories. Moroccan law enforcement has arrested more than 125 individuals allegedly linked to 25 different terrorist cells “in the early stages of planning attacks” against tourist sites, public figures and public buildings this past year, according to the U.S. State department. The kingdom, according to State department reports, suffered no terrorist incidents in 2019.

“Anytime a violent extremist organization or terrorist cell is weakened or dismantled it increases security, stability and the potential for a brighter future. Morocco remains committed to being a leader in counterterrorism and is a regional leader in security. They bring security to the rest of Africa through training and peacekeeping operations,” Karns told Zenger News.

“The U.S. has an excellent military-to military relationship with Morocco. Anytime a terrorist cell is dismantled, it disrupts future timelines for violence and destruction,” Karns said.

The colonel noted that ISIS, Al Qaeda, Al-Shabaab and Boko Haram all operate on African soil. “These groups’ ambitions need to be contained, otherwise it could prove costly for Africa, the U.S., and others,” he said.

The Moroccan counterterrorist raid comes on the eve of two historic terrorist attacks on America, one on U.S. soil in 2001 and another that killed the U.S. ambassador to Libya and three U.S. servicemen in 2012.

On the morning of Sept. 11, 2001, hijackers flew crowded commercial airliners into the twin World Trade Center towers in New York City and into the Pentagon in Washington, D.C., while United Flight 93, thought to be headed by hijackers to the U.S. Capitol, was downed by its passengers in a Pennsylvania field. Nearly 3,000 Americans died in those attacks.

President Donald J. Trump and his Democratic rival, former Vice President Joe Biden, are both scheduled to travel to the site of the Flight 93 National Memorial in Shanksville, Pennsylvania, on Friday.

In 2012, more than 100 Islamic radicals attacked a U.S. diplomatic compound in Benghazi, Libya, waging a 13-hour machine-gun battle that took the life of U.S. Ambassador Christopher Stevens and three other Americans.

In Morocco, the intended target of the terrorists has not been disclosed, nor has the likely timing of any suspected attack.

Morocco is a close ally of the U.S. and the timing of the raid won’t go unnoticed at the White House. The U.S. and Morocco are each members of the Global Counterterrorism Forum and have spearheaded an initiative to create a more efficient travel watch list and terrorist screening infrastructure. In addition, Morocco and U.S. intelligence agencies frequently share phone intercepts, satellite images, and human-intelligence reports.