A statue of a 19th century warrior has led to clashes between two communities in Belgaum, a town in Southern India 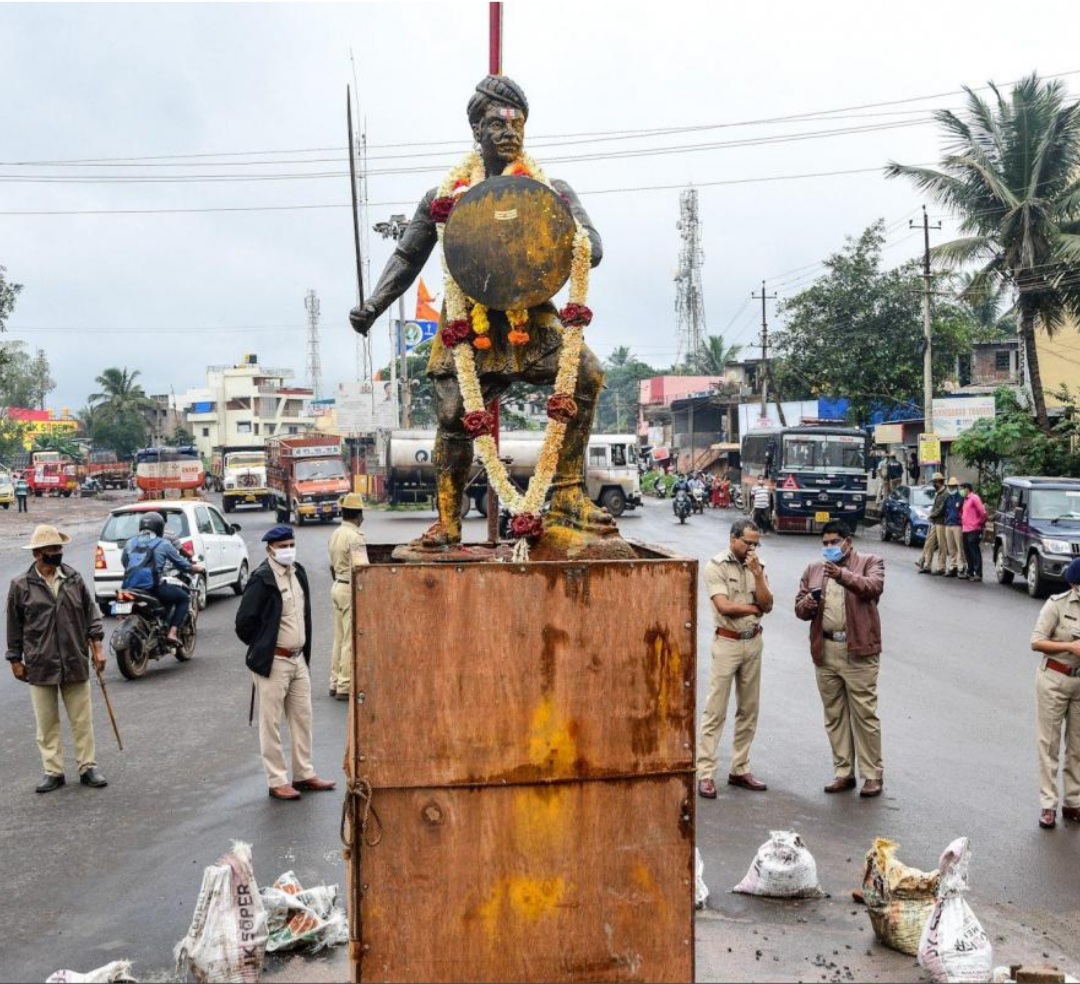 Statues of controversial personalities are coming down all over the world in recent months. Now in a small village in a disputed region in southern India, a warrior’s statue has sparked another controversy — this time between speakers of Kannada and Marathi.

The states of Karnataka and Maharashtra are involved in border dispute over Belgaum, which is currently part of Karnataka.

In Belgaum, about 300 miles northwest of Bengaluru, a statue to 19th century warrior Sangolli Rayanna — who had resisted the expansionist policies of the British East India Company — led to protests and counter-protests by Marathi-speaking and Kannada-speaking people of the area.

Kannada activists set up the statue at Peeranwadi village in the area on August 15 — India’s Independence Day. But, as they had not taken permission from the local authorities, the police dismantled the statue on the same day.

This led to protests by Kannada activists in the area, and counter-protests by Marathi speakers, who wanted to set up a statue of medieval warrior king, Shivaji.

Finally, a compromise was reached on Aug 28, when the villagers decided to reinstate the statue of Sangolli Rayanna in the village and name a crossroad nearby after Shivaji.

“We will write to the state government to formally declare the placement of the statue and the name of the road,” said M G Hiremath, deputy commissioner of the Mysuru district.

While Belgaum is in the state of Karnataka, where the majority language is Kannada, most resident of the area are Marathi speakers.

The city, which was previously part of Maharashtra, where the majority language is Marathi, was given to Karnataka in 1956. In India, states are divided mostly on linguistic lines.

A government committee had been set up to iron out the issues between the two states, but Maharashtra was not satisfied with the committee report.

“There are Shivaji statues in every village in the area,” said Kannada activist Ashok Chandargi. “We wanted one installed here and we got it.”

He said a few youngsters in Peeranwadi came together to make the statue out of a plaster of Paris.

“It took our boys eight days to make the statue,” said Chandargi. “We did not want a bronze statue that would be expensive. It was about Kannada pride and this statue was enough to make the point.”

He added that statues had always played an important part in Belgaum, which is on the border of Maharashtra and Karnataka.

“Shivaji is a national figure, but the Shiv Sena (ruling party in Maharashtra) has made him their brand,” said Chandargi. “Similarly, Sangolli Rayanna is important for us.”

Statues have been a cause for protests across India for years now.

A statue of Manu — ancient lawgiver for Hindus — on the premises of the high court in northwestern state of Rajasthan has also sparked protests. The statue was erected in 1989 by the Rajasthan Judicial Officers Association.

In 2018, activists smeared the face of the statue with paint. Leaders of the Dalit community — earlier untouchables in India’s caste system — have written to Sonia Gandhi, who leads India’s chief Opposition party the Congress, to have the statue removed. Rajasthan has a Congress government.

Manusmiriti, the law book written by Manu, is particularly regressive towards Dalits, who are still marginalized and discriminated against despite decades of affirmative action. B R Ambedkar, who chaired the committee that drafted India’s Constitution after Independence in 1947, symbolically burnt the book — a mode of protest still used by Dalit activists.

Not everyone, however, agrees with statue politics.

Sociologist Ashis Nandy told Zenger News that these protests were strategies of parties trying to make a point.

“No party sticks to an ideology,” he said. “Those who pretend to have an ideology are attempting to smudge the difference between ideology and political ploys.”

“In India, such tactics give you political dividends,” Nandy added. “In more mature societies, even if the statue is brought down, history will tell people about them —like in the case of Winston Churchill.”

A statue of Winston Churchill, a former British prime minister and war hero accused of engineering the Bengal famine of 1943, was defaced in London earlier this year during the George Floyd protests.

Such incidents have happened in India as well. In Kolkata, the eastern metropolis, a statue of 19th-century reformer Ishwar Chandra Vidyasagar was vandalized last year, allegedly by a supporter of prime minister Narendra Modi’s Bharatiya Janata Party.

Mamata Banerjee, the chief minister of West Bengal of which Kolkata is the capital, has been a vocal critic of Modi. Vidyasagar is an iconic figure for Bengalis.

Statues of Vladimir Lenin — quite common in West Bengal, which was ruled for 34 years by a Communist coalition — and Nobel laureate Rabindranath Tagore have also been attacked in recent years.

In the northeastern state of Tripura, a statue of Lenin was brought down when the BJP defeated a Communist coalition in 2018.

“Such adolescent behavior is present in every country and nothing can be done about it,” said Nandy.

“A statue reminds people of the personality,” said Badri Narayan, chairman of the board of governors of G B Pant Social Science Institute in Prayagraj. “Vandalizing a statue means trashing various values and ideologies connected to that statue. It also helps in claiming votes in elections.”

«Previous Post
India’s Ruling Party Rebrands Ahead of Tamil Polls»Next Post
Study: Much Shorter Course of Drug Therapy Is Effective for Some with Early-Stage Breast Cancer