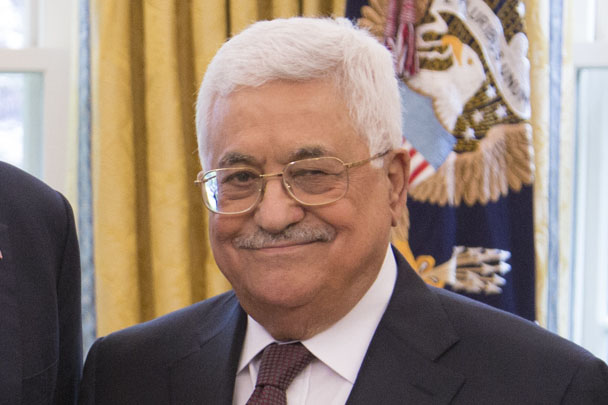 President of the Palestinian National Authority Mahmoud Abbas is pictured Wednesday, May 3, 2017, in the Oval Office of the White House in Washington, D.C. Abbas has kept his cool despite a diploatic deal that will see two more nations plant embassies in Jerusalem. (Official White House Photo by Shealah Craighead)

The announcement last week of a landmark agreement between Israel, Serbia and Kosovo to normalize economic relations drew no condemnation from Arab nations, but the European Union has criticized the deal because the two Balkan states will move their embassies to Jerusalem.

Serbia will become the first European nation to open an embassy in Israel’s capital city, a step that only the United States and Guatemala have taken. The EU has made the city’s disputed status a part of its Middle East policy, creating new tension with the Serbs as they try to join the 27-nation trade and economic bloc.

Although Palestinians claim East Jerusalem as the capital of their own future sovereign nation, and oppose all efforts to legitimize Israel’s control of the entire city, the rest of the Arab world has taken a wait-and-see approach.

“This deal is not really thought about much in the Arab and Muslim world at all,” said Luke Coffey, a national security and foreign policy expert at The Heritage Foundation in Washington, D.C. “Even though Kosovo is a Muslim majority country, it is not an Islamic state like most are across much of the Middle East. Most in the region see this as a very niche European matter.”

Most people in Arab countries “do not care one way or the other where these two relatively small Balkans countries have their embassies in Israel,” he said.

The Trump administration, with one foot in governing and another in re-election campaigning, is already emphasizing the president’s acumen brokering deals between nations. The fundamentals of the agreement, which the president calls a “major breakthrough,” include cooperation to bolster investment and job opportunities.

Serbia and Kosovo now also say they will make an effort to follow Israeli law and decriminalize homosexuality in their jurisdictions, a move that is unlikely to meet with approval from conservative Arab governments.

Richard Grenell, the openly gay former ambassador to Germany, is pushing to overturn laws in nations that make homosexuality illegal. The Human Rights Campaign, America’s most prominent LGBTQ lobby group, has condemned Grenell for serving Trump, whom it accuses of being hostile to the gay community.

The new accord follows a separate Trump-brokered diplomatic deal between the United Arab Emirates and Israel.

Serbia has long pointed with pride to Israel’s refusal to recognize Kosovo, which declared independence from Serbia in 2008. Belgrade deployed troops into the territory in the late 1990s to quell unrest by ethnic Albanian separatists, and the two countries have since been at odds.

As part of the accord announced September 4, Kosovo agreed for one year to halt its campaign to join significant international organizations. Serbia agreed, also for one year, to curb its efforts to coerce countries into “derecognizing” its former territory.

Israeli Prime Minister Benjamin Netanyahu has embraced the new ties with Kosovo, but the Jewish state has more at stake in its alliances with other Muslim-majority and Arab countries.

The new accord’s stated intention is to focus on economic cooperation, but Israel stands to gain in other ways. For example, the agreement calls on Serbia and Kosovo to officially designate the Lebanon-based Hezbollah a terrorist organization and block its economic activities in their countries.

The deal represents the end of the Kosovo war, “which was really the last major security crisis for the U.S.” before the Sept. 11 terrorist attacks and is “an important symbolic win for the Trump administration,” said Matthew Schmidt, a political science professor at the University of New Haven in Connecticut.

Beyond the opening of embassies, additional details are “still to get worked out,” he said.

Coffey, of the Heritage Foundation, said that “some points in the agreement were concrete proposals and others are merely aspirational.”

“Both countries have a long way to go before they fully normalize relations,” Coffey said. “Overall, these talks were a significant foreign policy success.”

«Previous Post
But What Is That in Human Years? 20,000-year-old Remains of a Dog May Be the World’s Oldest Pet»Next Post
VIDEO: Police Arrest Covid-Positive Lifeguard for Surfing Without a Mask