But What Is That in Human Years? 20,000-year-old Remains of a Dog May Be the World’s Oldest Pet

The discovery in Italy is changing how scientists think about how long ago wolves evolved into dogs. 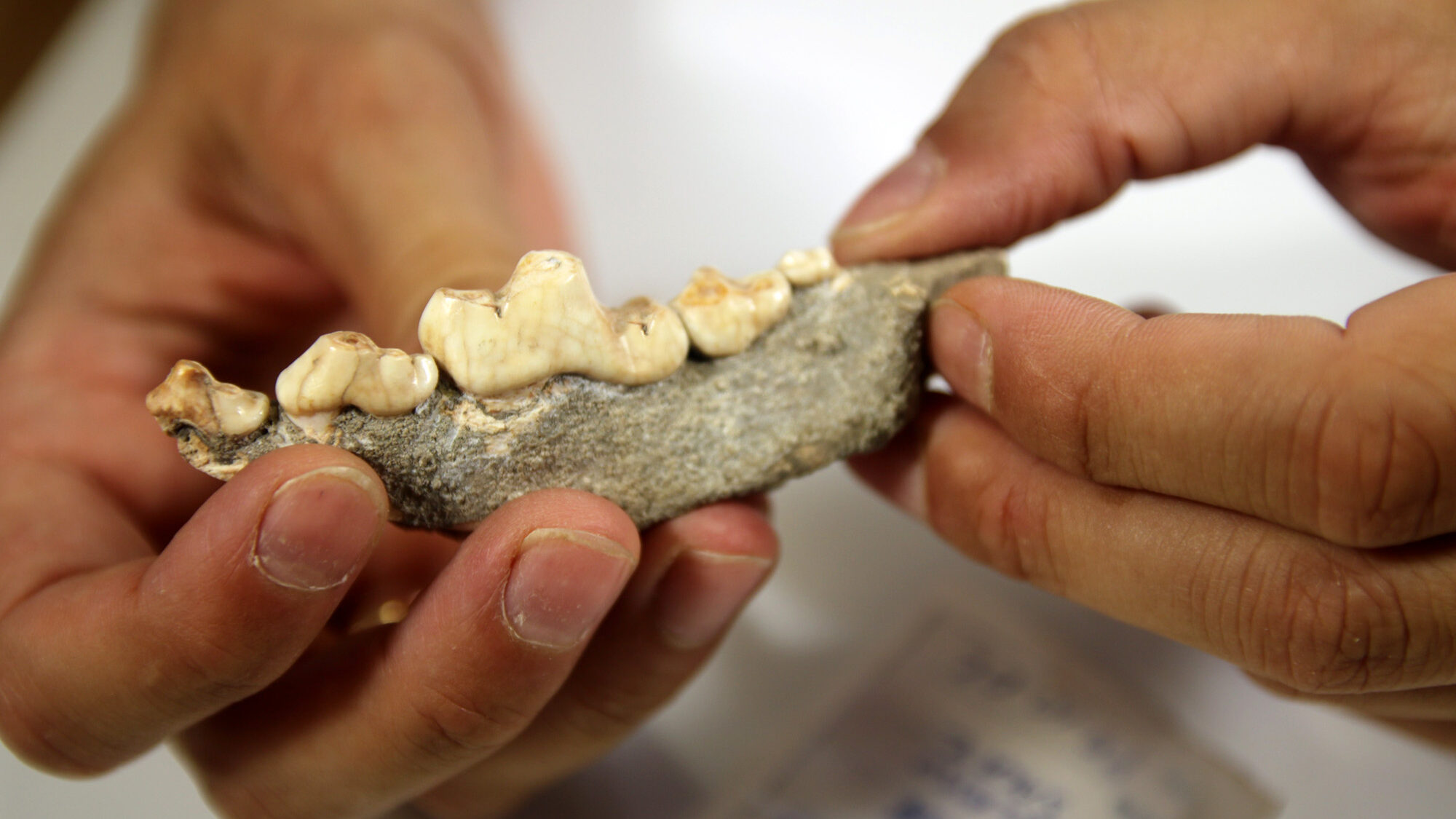 The remains of what could be the oldest pet dog ever found have been discovered by researchers from the University of Siena in Italy.

The archaeological remains may be up to 20,000 years old and could reveal key information on the evolution of canines from wolf to dog, according to the Prehistory and Anthropology Research Unit from Siena University’s Department of Physical Sciences, Earth and Environment.

According to the widely accepted theory, domesticated dogs evolved from wolves that transformed from predators to scavengers to ensure their survival, attaching themselves to human settlements to find enough food.

But the role wolves and later, dogs, played in the lives of our ancestors is a question the Siena University research team hopes it will be able to shed new light on.

The remains were found in two Paleolithic caves in the Apulia region in southern Italy. The Paglicci  and Romanelli caves near the town of Castro were also inhabited by humans between 30,000 and 40,000 years ago, which indicates that dogs lived side by side with humans in the caves.

The age of the dog remains found by the researchers ranges from 14,000 to 20,000 years old, the high end of which would add another 4,000 years to the known history of the domesticated dog.

“From an archaeological point of view, the oldest remains of domesticated dogs were found in Central Europe and date back 16,000 years. In the Mediterranean area, we have now established that domesticated dogs lived here 14,000 years ago for sure, but possibly even 20,000 years ago,” said Francesco Boschin, coordinator of the Prehistory and Anthropology Research Unit’s work.

In either case, “the remains found at Apulia represent to date the oldest specimens discovered in the Mediterranean area and could also represent the until now missing evidence of the evolutionary process that led to the dog, the very first domesticated animal,” Boschin said.

Remains of wolves were also discovered in the caves. They were bigger than the dogs and had distinct molars designed to tear meat apart that dogs do not have. Molecular analysis indicates that the genetic separation of wolves and dogs started somewhere between 20,000 and 30,000 years ago, and according to Boschin. The domestication process itself may have played a key part in that process.

“We believe that in the first stage of the domestication process it is always like that — domesticated animals are always smaller than wild ones. This is true for all mammals. In the case of dogs, we consider them to be pets, and this is the first evidence: their smaller size,” he said.

Scholars and scientists agree the domestication of the dog dates to the Last Glacial Maximum, a period of strong environmental crisis during which many European animal populations — and humans — sought refuge in warmer regions, such as the peninsulas of southern Europe, including Italy, Iberia and the Balkans.

“In this period of serious crisis, the wolf, a social predator in some way similar to man, found a new way to ensure survival: taking advantage of a new niche — eating the leftovers from human settlements,” Boschin said.

This change in animal behavior would have favored a closer relationship between humans and wolves, and it is not unlikely that humans helped the gradual development from wolf to dog. Killing the most aggressive wolves for safety reasons while letting the less threatening ones live would have accelerated the domestication process, Boschin said.

The genetic profile from one of the dogs discovered in the Paglicci Cave closely resembles the genetic profile of similar remains found in Bonn-Oberkassel, Germany. Both of these findings could date to about 14,000 years ago.

This, Boschin said, shows that the specimens found about 621 miles (1,000 kilometers) apart may both have originated from a common older and genetically distinct population and then spread to various parts of Europe.

“At that time our continent was characterized by a strong cultural fragmentation, but the discovery of two genetically related dogs, one in southern Italy and the other in Germany, suggests that despite cultural differences, the dogs may have represented a common cultural feature among human groups.”

The research could lead to a better understanding of the role dogs played in Paleolithic communities, something we still know little about. Dogs may have had a specific function in hunting or in the defense of camps. They may also have served a more spiritual purpose, as dogs still do today in some tribal cultures where they are considered reincarnations of the dead or earthly manifestations of spirits.

The research team is still analyzing its findings and hopes to eventually be able to provide more answers to questions about the early coexistence of man and his best friend, Boschin said.