There’s No Ship like Partisanship! Trump Fans Hold Boat Parades in 8 States the President Must Win

One Trump flotilla’s leaders want Guinness World Records to certify their gathering of 12,000 boats as the largest in history. 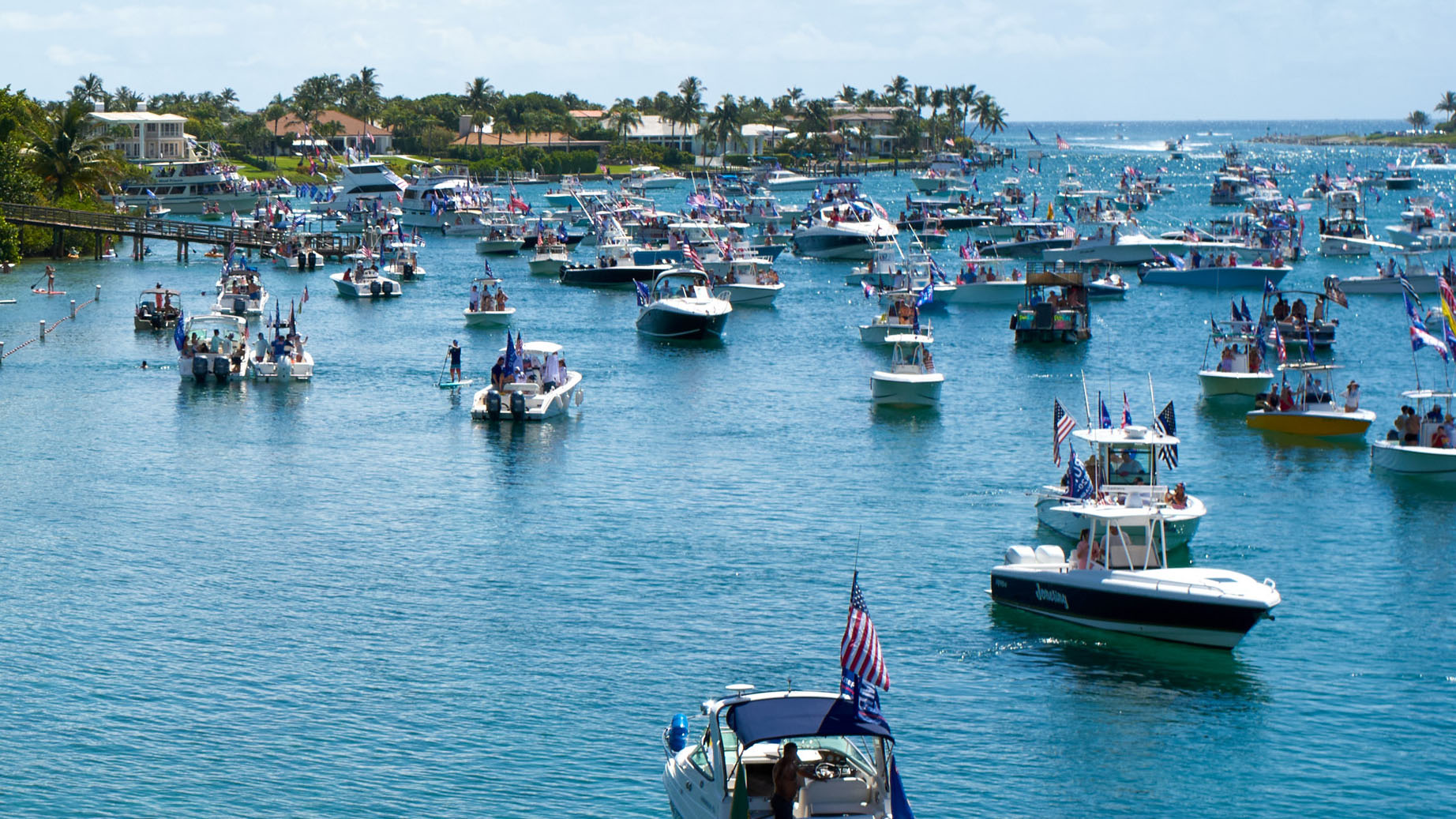 LABOR DAY: Supporters of President Donald Trump held a boat parade in the Jupiter Inlet near the Jupiter Lighthouse in Jupiter, Fla. which is in Trump's adopted home of Palm Beach County, on Monday, September, 7, 2020. (Craig Litten/Zenger)

Social-distancing orders have made it difficult to gather on land, so supporters of President Donald Trump have shifted to the seas.

Pro-Trump boat parades, some boasting thousands of watercraft, have been organized during the past week in Florida, Minnesota, Missouri, North Carolina, Ohio, Texas, Virginia and Wisconsin, a new tactic in a close-fought presidential contest. All eight states are on Trump’s must-win reelection list.

A flotilla of yachts and other boats sailed or motored up the Potomac River on Sunday, streaming U.S. and “Trump 2020” flags under the watery reflections of the Lincoln Memorial, the Washington Monument, the Pentagon and the Georgetown spires that house some of President Donald J. Trump’s biggest critics.

The Potomac River divides the nation’s capital from the state of Virginia. Trump failed to win in either jurisdiction in 2016.

Another mass of watercraft larger than its Washington, D.C. counterpart gathered in a show of strength on Florida’s Atlantic coast Monday, and motored 25 miles to the president’s Mar-a-Lago resort home.

The boat parade started in Jupiter, a wealthy beach town, and wound south along the Intracoastal Waterway to West Palm Beach. From nose to tail, an estimated 1,200 boats spent more than an hour passing a single bridge.

Palm Beach County is home to some of America’s wealthiest residents, evident by the size of their powerboats. But all walks of life were represented: Kayaks and rowboats joined in, with Trump supporters on more expensive boats cheering them on. Onlookers, in hats and sunglasses, lined bridges with flags promoting Trump’s reelection.

Some fans tied flags to their fishing poles and hollered.

Swimmers on Jupiter’s banks gawked and marveled, and some dried off with Trump-branded towels, which some children used as walking campaign ads.

Trump needs all the free publicity he can get to shore up his base. Election Day looms less than 60 days away. Though public opinion polls show the race tightening, Biden remains in the lead.

During a far larger flotilla Saturday on Lake Travis in central Texas, the wake left by larger boats caused five smaller craft to sink, according to the Travis County Sheriff’s Office.

On Florida’s west coast, an estimated 11,000 boaters gathered Monday for a pro-Trump parade near Pine Island. Organizers have asked Guinness World Records to certify their event as the largest such convergence in history.

Florida is a key battleground state in this year’s presidential election, as it has been for decades. The president officially changed his state of residence last year, moving—on paper, at least—from New York to Florida. The Sunshine State has no state income tax while New York City residents can face state and city levies that add up to more than 12%.

Trump has feuded with New York’s Democratic Party-run city and state governments on everything from Covid-19 preparedness to the privacy of his personal income tax returns.

Although permits for mass gatherings in public waterways can take weeks to obtain, the results came just as the president emerged from his own weekend of stormy seas caused by The Atlantic.

Relying on anonymous sources, the 163-year-old magazine’s top editor wrote Friday that during a 2018 trip to France, Trump refused to visit a military cemetery, saying “[i]t’s filled with losers.” Other news outlets including the Fox News Channel, the Associated Press and The Washington Post claim to have independently confirmed the story, all relying on their own anonymous sources.

Trump fired back Monday during a White House press conference, calling The Atlantic’s story “a hoax” and claiming the editor “made up the story.”

“Only an animal would say a thing like that,” the president said, announcing that 15 current and former administration officials have stated publicly that the events in the Atlantic’s story never happened.