Democrats say ‘absurd’ Republican bill has put the USPS $11 billion in the red, but it’s only a debt on paper. 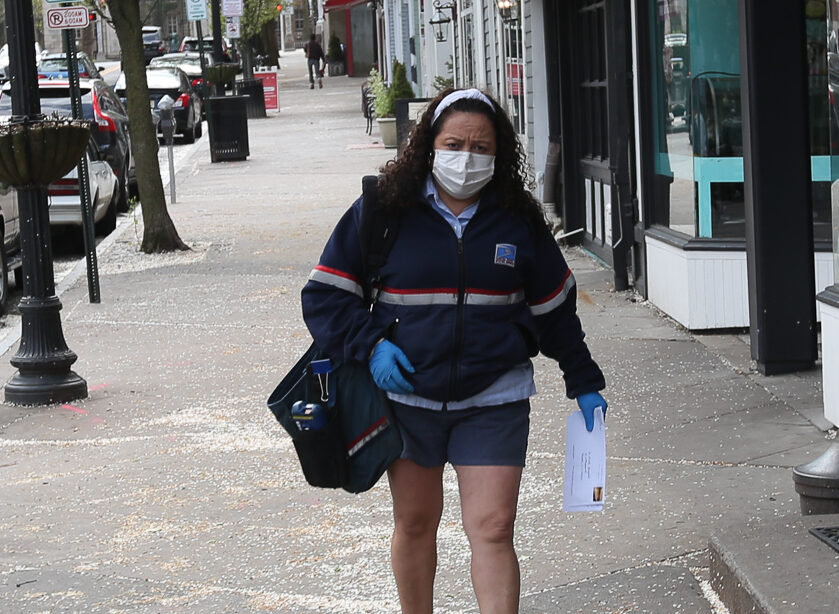 A mail carrier walks down Witherspoon Street while wearing a mask amid the coronavirus outbreak on April 9, 2020. (M. DiPaola/Zenger)

Proponents of a mail-in election this November have worried aloud about the deep-in-debt U.S. Postal Service collapsing under the weight of 130 million ballots, all due the same day. But its $11 billion in red ink is a pension-driven mirage.

Unlike virtually all private companies and government agencies, the postal service is required to fund huge cash reserves to prepay workers’ retirement health care benefits 75 years into the future. Most other retirement programs require far smaller reserves on hand.

The postal service is self-funded. On paper it has experienced significant losses since 2006 when Congress ordered it to hoard retirement funds.

“Before the 2006 law, it was coming out ahead,” said Christopher Shaw, a postal service historian and policy analyst. “It’s this 2006 law that makes it seem like there’s these huge losses.”

Despite the law’s mandate, the postal service has defaulted on all its required payments to the Postal Service Retiree Health Benefits Fund since 2010, according to a Jan. 31 report from the Congressional Budget Office. The fund is on pace to be depleted by fiscal year 2030 unless the payments resume, according to the Office of Personnel Management, an executive branch agency.

Year after year the postal service has put a giant unpaid expense on its books. And since the payments were calculated to draw interest through investments, each year’s shortfall has been larger than the last.

They all represent red ink, making the agency’s financial crisis look worse each year, and far worse than it would be if Congress restructured its debts.

About 500,000 postal retirees were receiving health benefits through the fund as of August 2018, according to the GAO.

The Democrat-run House of Representatives passed a bill in February to overturn the 2006 postal pension mandate. But the majority-Republican Senate and the threat of a White House veto made it functionally dead on arrival.

“The pre-funding mandate policy is based on the absurd notion of paying for the retirement funds of people who do not yet, and may not ever, work for the Postal Service,” Rep. Peter DeFazio, an Oregon Democrat who authored the bill, said in a statement.

Revenue numbers are better news. The postal service took in a reported $17.6 billion during the third quarter of fiscal year 2020, which ran from April to June, as coronavirus quarantines drove Americans to ship more packages.

The agency also has $13.3 billion in cash, roughly the value of two years’ worth of overdue pension payments.

House Democrats approved legislation last week hiking annual funding for the postal service by $25 billion, and repealing changes the agency implemented this year that have led to the much-photographed dismantling of mail-sorting machines.

The changes began shortly before President Donald Trump appointed Louis DeJoy, a Republican fundraiser and business executive, to be postmaster general. Those changes have continued under his watch, stoking fears that slow mail deliveries will leave millions of American voters with uncounted ballots.

Trump has already signaled his disapproval.

“USPS does not need a $25 billion bailout,” the White House said in a statement. “It needs reforms that will return it to a trend of longterm financial self-sufficiency.”