Hundreds of Cameroonians have visited the twin girls in the hospital and their parents hope they can be separated.
By Nalova Akua September 4, 2020
Facebook
Twitter
Linkedin
Email 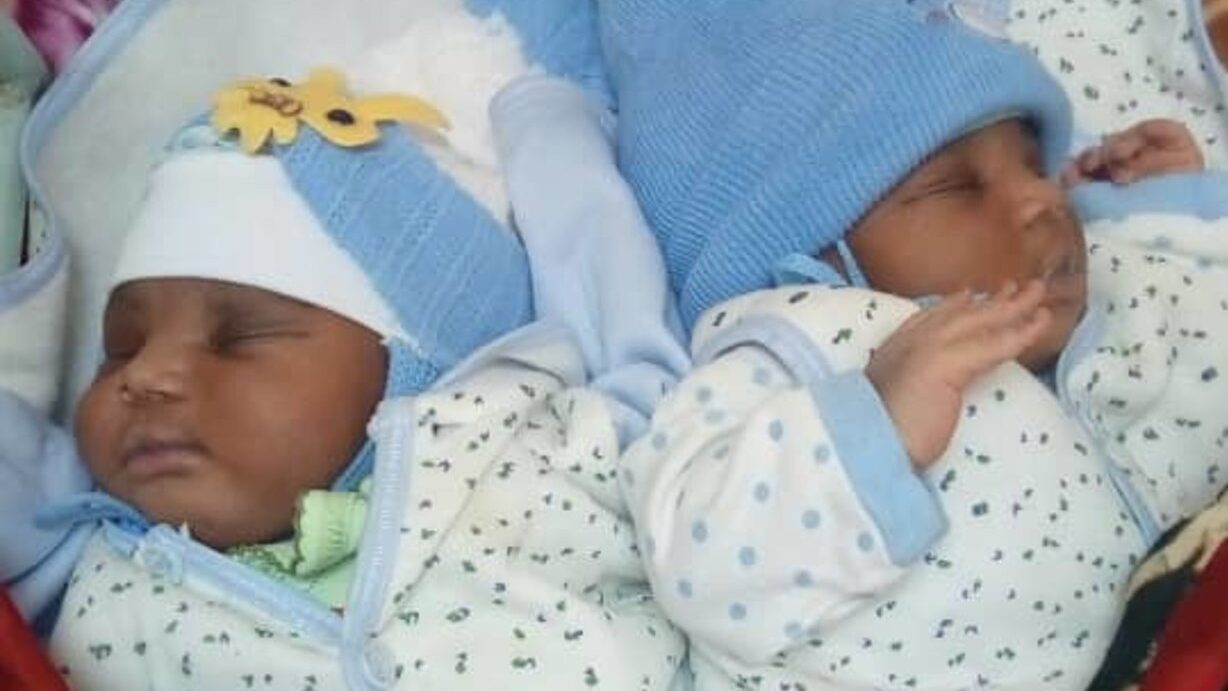 The twin female newborns, Elizabeth and Mary, sleep quietly in a hospital in Yaounde on July 10, 2020. (Courtesy: Ekane Rechard)

Twenty-four-year-old Caroline Enjewi was overjoyed when the results of her pregnancy ultrasound revealed that she was carrying twins.

She saw it as God’s will after her first child was stillborn. But her expectations turned into a nightmare when she delivered her babies by cesarean section in Yaounde, Cameroon. Her twin newborn girls were conjoined at the buttocks.

“I was shocked when I realized that my twins were conjoined. I was worried why does this occur to me? Later, I just had to accept the fact. I have never seen conjoined twins before. It is not easy for the babies lying on a particular spot for long. The cry of one baby disturbs the sleep of the other. I cannot breastfeed or bathe the babies without help from someone. It is not really easy for me taking care of the babies. I wish things could be done a little bit fast[er] so that my babies can be evacuated abroad for special surgery,” Enjewi said. 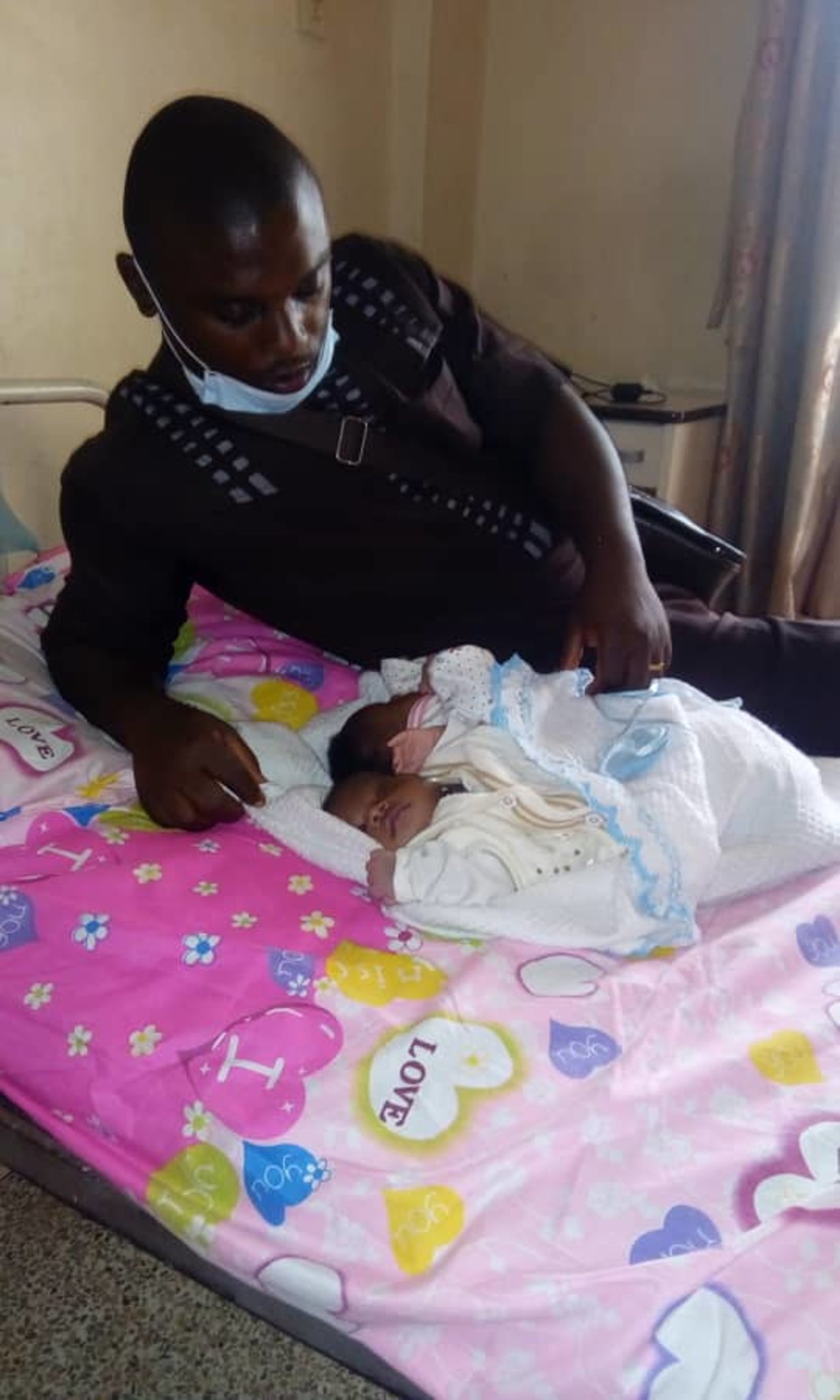 Ekane Richard Akwe looks after his conjoined newborns at the Yaounde Gynaeco-Obstetrics and Pediatric Hospital on July 16, 2020. (Courtesy: Ekane Richard)

Conjoined twins represent one of the rarest forms of congenital abnormalities with an incidence of 1 in every 200,000 live births, according to ResearchGate. Conjoined births are rare across the globe, but especially in Cameroon and it often generates discussion on the treatment of such cases in the country, which has recorded a small uptick in conjoined twins births lately. Medical experts say Cameroon does not have the facilities to undertake the delicate operations involved in separating them.

“For now, the babies are OK. We are making a [medical] work-up until we have a total mastery of the malformations that they have, and then look at what the possibilities are,” said Professor Fru Angwafo III, director general of the Yaounde Gynaeco-Obstetrics and Pediatric Hospital, the government-run hospital where the twins were referred to following  their delivery.

Angwafo said there are more questions than answers.

“These children will have issues with their digestive tract because for now they are two, but they have one anus. For now, it is stage management of the defects. We have management risks, operational risks. How do we manage the psycho-social aspect, the purely surgical aspect? Then after surgery, they will have to have special care,” Angwafo said.

Dr. Choundong Veronica Nkwenti, the gynecologist who preformed the C-section, told Zenger News that she knew the delivery was going to be complicated after seeing the ultrasound results.

“This girl was following up all her prenatal tests. She came here purposefully for delivery. The ultrasound results, which she presented to me, revealed that there was only one amniotic sac instead of two. Unfortunately, it didn’t strike the person who did the ultrasound that it is abnormal for the babies to be in the same amniotic sac, in which case, he ought to have referred to a specialist,” said Nkwenti.

Nkwenti recalled not knowing the mother was having conjoined twins before preforming the risky delivery method. It wasn’t until the procedure was nearing the half-way point that Dr. Nkwenti realized this wasn’t a normal delivery.

“If I knew they were going to be conjoined twins, I would not have carried out the C-section. I would have referred her to a more sophisticated health facility. I first pulled out one leg, but the baby did not come out. I pulled out the second leg, nothing came out. It then occurred to me that I may be taking one leg of one child and one leg of the other child. Thank God, we succeeded in bringing out the children,” she said.

For the twins’ father Ekane Richard Akwe, the ordeal was fraught with anxiety after numerous ultrasounds were unclear. While his wife had her prenatal visits at the government-run Biyem-Assi District Hospital, when it came time to deliver the twins, the couple decided a private setting was best. The family was asked to pay $617 USD, but after pleading with the doctors, the cost dropped to $441, still a fortune for the husband and wife. The couple are unemployed because of the lockdown imposed by Covid-19.

“It was a shock to me. I remained silent for about 15 minutes asking God why. But it soon occurred to me that I don’t need to question God. I then prayed to God that let His will be done. No matter the stress, I cannot be angry. I am happy to see my children,” said Akwe.

The father of the latest conjoined twins is gradually coming to terms with what is often interpreted as witchcraft in most African societies. Conjoined twins are considered evil in some parts of rural Cameroon, with some being killed.

The birth of the conjoined twins has reignited debates on the perception and treatment of such cases in Cameroon. Since their arrival in July, hundreds of Cameroonians have been streaming into the hospital to see a rare sight.

“People have been coming to really see for themselves if it is true there are conjoined twins here. But they are refused entry by hospital administration who says the last time such cases were reported, many Cameroonians snapped photos of the babies and shared on social media,” said the mother.

The couple now relies on charities for food and assistance in paying the medical bills. But their greatest hope is to receive enough in donations to enable the twins to receive specialized surgery outside of Cameroon.

“I am pleading with the government and the world to assist us so that once the doctors are done with the tests, the babies can be evacuated,” said Akwe. “I also need a job because supposing we are discharged today, how will I take care of the babies?”