A 23-year-old woman is among a dozen people to date who have had hand transplants in India. 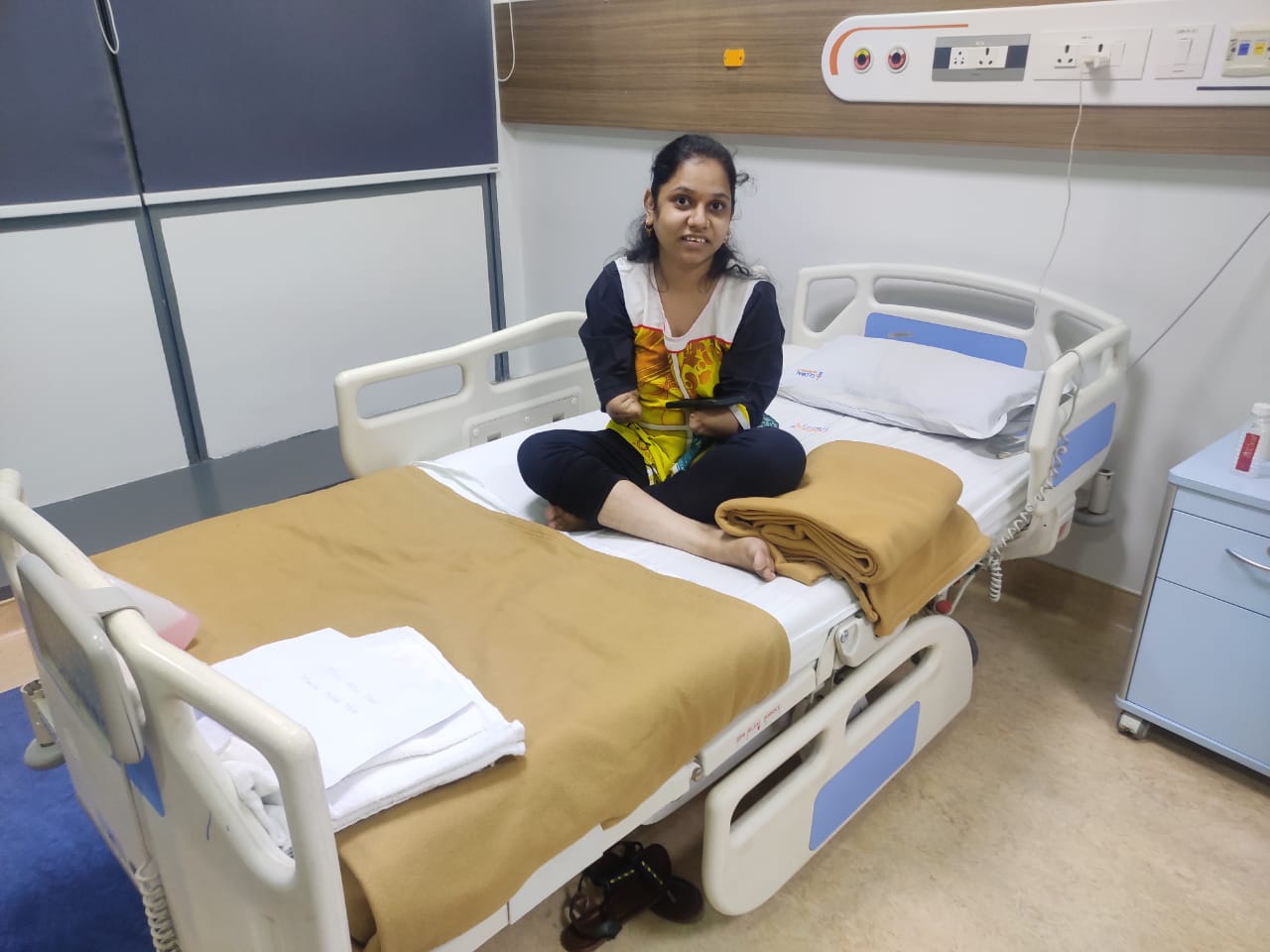 Monika More sits on her bed before the surgery in Mumbai, India in an undated photo. (Courtesy: Vishwas Jadhav)

Six years after she lost both hands in a train accident in Mumbai, a 23-year-old woman became the first in the city to undergo a double hand transplant.

Monika More is among a dozen people in India and about 100 across the world to undergo such a surgical procedure.

More was attempting to board a moving train on Jan. 12, 2014, when she slipped in the gap between the platform and the train. Both of her hands were crushed and had to be amputated.  She was 17 years old at the time and spent six months in the hospital undergoing multiple plastic surgeries and bone re-shaping procedures. After that, she relied on prosthetics —until a turn of events that led to her Aug. 28 surgery.

A day earlier, the family of a man in his 30s, who was declared brain dead at a hospital in Chennai in south India, consented to donating his organs as well as both of his hands. There were no suitable recipients for the hands in Chennai or the rest of the state of Tamil Nadu, said Dr. Astrid Lobo Gajiwala, head of the Regional Organ and Tissue Transplant Organization, so the donor hands were offered to all other states.

“Since Mumbai found a match in Monika, everything was mobilized quickly to get the hands for transplant,” Gajiwala said.

The hands were flown to Mumbai, landing there at 1:40 a.m. on Aug 28, and immediately transported from the airport to the Global Hospital, where More had been prepped for surgery. The procedure began at 2 a.m. and took a little over 15 hours with a 12-member team led by Dr. Nilesh Satbhai.

“Doctors have told us that the procedure went very well,” said More’s uncle, Vishwas Jadhav. “She has been shifted to the Intensive Care Unit.” While in intensive care, she had a short video call with her mother.

The world’s first hand transplant was performed in Lyon, France, in 1998. The 48-year-old recipient, who had lost his right hand in a saw accident, eventually underwent a graft removal procedure as his body rejected the transplanted hand multiple times. India recorded its first successful hand transplant in 2015 at the Amrita Institute of Medical Sciences in Kochi, Kerala.

“The recipient of the hands is doing extremely well,” said Dr. K. Subramania Iyer, who led the surgical team. The second person to undergo a hand transplant at the institute was an Afghan soldier who lost his hands in 2012 while defusing a bomb. While his transplant was successful, he was killled in a bomb blast in Kabul in February 2020. The institute has performed hand transplants on seven patients so far.

“Barring one, all were successful,” said Iyer.

While donations of kidneys, liver, lungs and hearts have slowly increased, experts say it is not easy to convince families to donate hands as it is a visible mutilating donation.

“The success of Monika More’s hand transplant will create tremendous awareness and drive such donations in the future,” said Kirit Somaiya, a politician from Mumbai who has helped More and her family raise money for her education and for prosthetics.

More’s accident was widely covered in the Indian media, triggering debates about the crowded local trains in the city and highlighting structural glitches that allowed for a wide gap between the footboard of the train and the platforms. The hospital where More was admitted after the accident waived her treatment charges.

Financial help has poured in for her from all across the country; in 2014, the family raised more than INR 3.5 million ($47,789). In 2018, More’s parents traveled to the neighboring city of Pune to meet 20-year-old Shreya Siddanagowder whose arms were crushed in an accident. She had a successful double hand transplant at the Amrita Institute of Medical Sciences. Most recently, the skin of her transplanted hands, from a male donor, began lightening, coming closer to her own complexion.

“We have full faith in the doctors that Monika’s hand transplant will also have positive results,” said Jadhav, her uncle. “She is gritty. She was prepared to undergo the major surgery knowing well that it is a long process to get the transplanted hands to function properly.”

“We have been working to raise the money for a year,” said Somaiya.