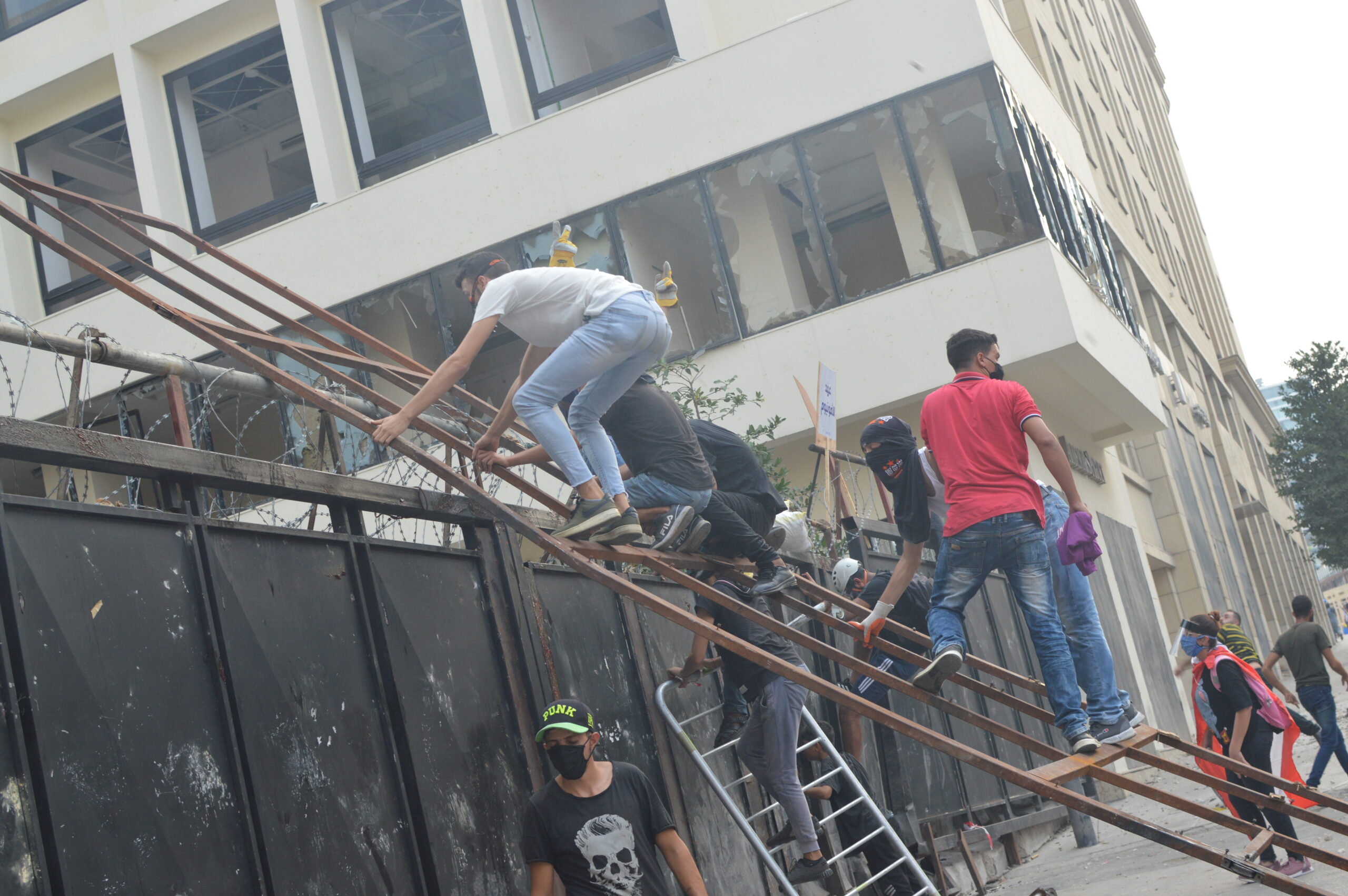 Men climb ladders to get over a barricade in Beirut, Lebanon on September 1, 2020. (Dario Sabaghi/Zenger)

New protests erupted in Beirut on Tuesday on the centenary of the creation of Greater Lebanon by the French. The demonstration coincided with French President Emmanuel Macron’s diplomatic visit to Beirut to encourage reforms in the country, which has been gripped by economic crisis since 2019.

People started gathering on Martyrs’ Square at 4 p.m., demanding the political system be reorganization and denouncing political corruption. Anti-government protesters then moved to Nijmeh Square, near the Lebanese Parliament.

Violence also accompany some of the protests.

Some protesters, wearing anti-gas masks and helmets, started to break walls and sidewalks. They took bricks and rocks and hurled them at the windows of the Parliament building. Others attempted to climb the barriers but failed. Traffic lights that dot the main gate to the Parliament were also broken.

Anti-government protesters tried to break the gates to the Parliament, but once they succeeded in opening one, Lebanese riot police fought them back, shooting tear gas into the crowds to disperse them. Activists helped those injured by tear gas.

As the tear gas clouds covered the area of Nijmeh Square, protestors moved to Rue Waygand, the street alongside Parliament, trying to open its thick metal gates. They used stones, hammers, road signs and poles, while continuing to hurl stones at the edifice.

Given the chaos, people disperse between Martyrs’ Square and Charles Helou Street, which is near Beirut’s port area. That area endured an explosion of 2,750 tonnes of ammonium nitrate Aug. 4; the damage is still visible.

Anti-government protestors tried to block access to Charles Helou Street as police responded with more tear gas. They also built barricades with dumpsters and barriers in both directions. Some broke trees and set fire along the road.

Most protesters chanted “Revolution” during the gathering. Others asked for a new Lebanon, while some wanted to end foreign interference, referring to Macron’s visit. The protest ended with 20 injured, and one person transferred to a hospital, according to the Lebanese Red Cross.