The Elephant Grandma Who Never Forgot

See the heart-lifting moment when three generations of female elephants packed their trunks for a German zoo reunion. 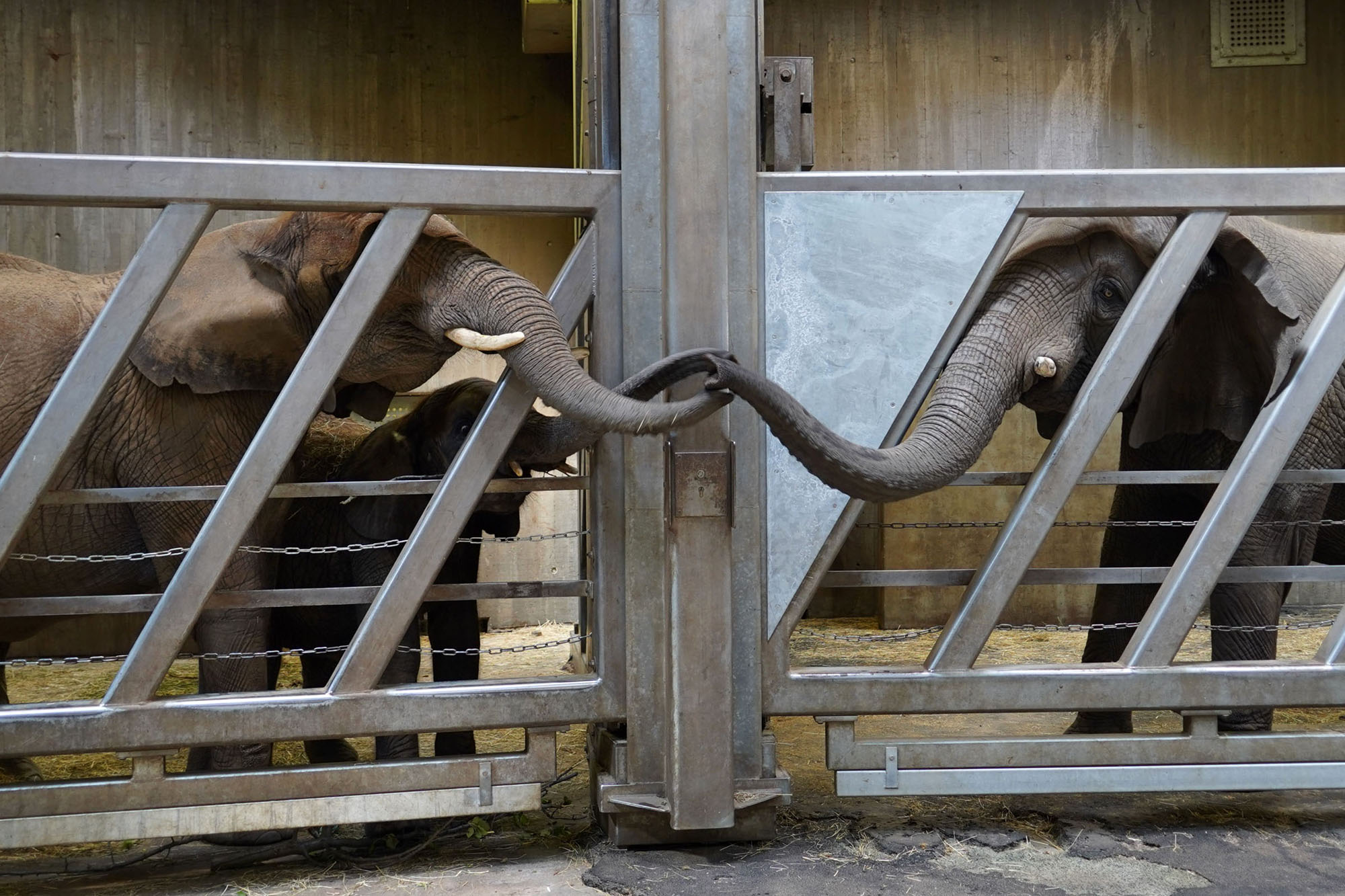 The first contact between Pori (39, right) with daughter Tana (19) and granddaughter Tamika (4), in an undated photograph at the Tierpark Berlin Zoo. (Zoo Halle/Newsflash)

Three generations of elephants were recently reunited at a German zoo and promptly celebrated by touching their trunks through a set of bars that was used to separate them initially. That meeting went so well that the elephants are now being allowed to interact without bars.

These “awww…” moments took place after a 39-year-old elephant, Pori, was moved from her former home at Tierpark Berlin Zoo to the Bergzoo in Halle, Germany. Once there, she was reunited with her 19-year-old daughter, Tana, after 12 years of separation, as well as her granddaughters, Tamika, 4 and Elani, 1.

In the wild, zoo officials say, female elephants tend to remain with their mothers, and this reunion was part of a program slowly recreate this natural process in herds being held in captivity. (Bull elephants, meantime, tend to leave the herd to form new relationships.)

“Pori’s arrival in Halle is an important step in modern elephant husbandry,” said zoo director Dennis Muller. “In the future, all elephant herds in European zoos should be cared for in such natural family structures. Today we have come a great deal closer to this goal.”

The initial photographs were taken when the elephant house was closed to allow the separated family to get to know each other. Zookeepers then allowed the four to be together in the outdoor area surrounding the zoo’s elephant house. The staff then noticed the elephants communicating with each other by making low rumbling noises that sound similar to thunder, with lots of trunk contact.

Muller said it was a really touching moment as the granddaughters Tamika and Elani met their elderly relative, with the littlest elephant even trying to suckle from his grandma. At one point, Pori lifted her leg to allow the youngster to safely stand underneath her.

Mueller said with the reunion, his zoo is the only one in Germany in which elephant cows from a single matriarchal line live together.

Pori is an African elephant (Loxodonta) who was born wild in Zimbabwe in 1981 and brought to Germany to the Magdeburg Zoo, where she lived from 1983 to 1997, when she was sent to the for Tierpark Berlin for breeding purposes. In 2001, she gave birth to and raised her first calf, Tana, with whom who she has now been reunited.

The monitoring of such elephant populations in zoos is part of a global conservation breeding program run by the World Association of Zoos and Aquariums, which consists of committees made up of experts from zoos in designated geographic areas that work to determine optimal herd compositions and any resulting animal moves.

Overall, the African elephant is listed as “vulnerable” on the International Union for Conservation of Nature’s “Red List of Threatened Species,” thanks to such factors as loss of habitat and hunting.