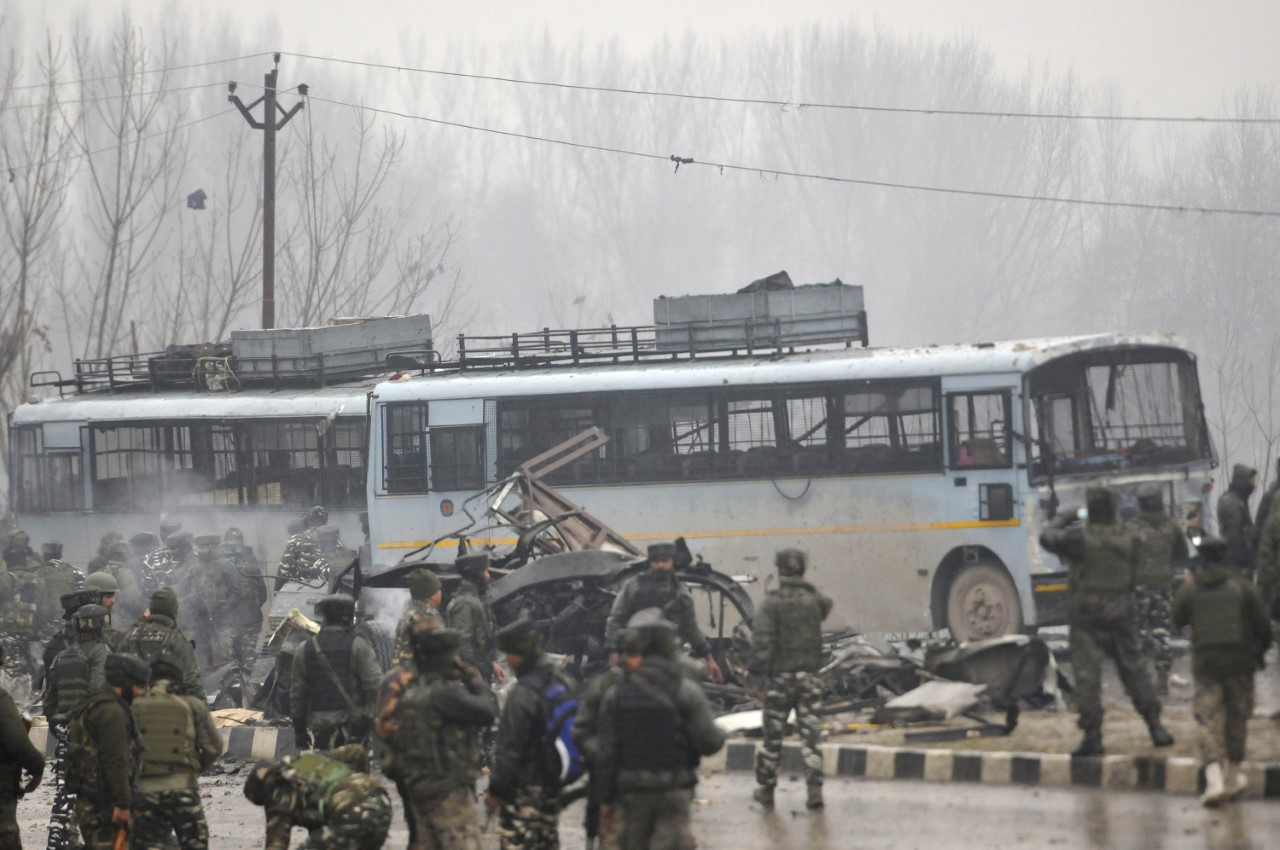 Security forces examine the scene of the suicide bombing in Lethpora in Kashmir on February 14, 2019. (Courtesy: Mohammad Tahir)

NEW DELHI —Pakistan-based Maulana Masood Azhar, designated a terrorist by the United Nations, has been charged in India for the February 2019 suicide bombing in Pulwama, Kashmir, that left 40 Indian paramilitary personnel dead and brought the two nuclear-armed nations to the brink of war.

A 13,800-page charge sheet against Azhar, his brothers Rauf Asghar and Ammar Alvi, and 16 others has been filed at a special court in Jammu in north India by the National Investigation Agency. The 19 have been charged under various provisions of Indian laws, including the principle counterterrorism law, the Unlawful Activities (Prevention) Act, 1967,and are also charged with murder. The special court is likely to hear the matter in September.

While Azhar, who is reported to be in Pakistan, and five others continue to be out of India’s reach, seven others have been arrested and six have been killed, the investigation agency said in a statement on Aug. 25 after it filed the charge sheet.

“The investigation has revealed that Pulwama attack was a result of a well-planned criminal conspiracy hatched by the Pakistan-based leadership of terrorist organization Jaish-e-Mohammad (JeM),” the agency stated.

After the suicide bombing, the JeM released a video to claim responsibility for the attack in Kashmir, a contested territory between Pakistan and India. The countries have been at war over Kashmir several times since they both became independent from British rule in 1947.

Indian investigators now claim to have cracked the timeline of the planning and execution of the Feb. 14, 2019 attack, when a car laden with explosives rammed into a bus carrying Central Reserve Police Force personnel as it made its way to Srinagar in the Kashmir valley.

The investigators claim that JeM operative Mohammad Umar Farooq, a Pakistani who illegally crossed into India in April 2018, planned the attack with three Pakistanis and two Kashmiris. The group was aided by several others who are named in the charge sheet.

Investigators said the car used to carry out the attack was packed with nearly 200 kilograms (440 pounds) of explosives such as calcium ammonium nitrate, RDX, gelatin sticks and aluminium powder. Investigators say the explosives were ready in January 2019, but snowfall prevented the operations until mid-February.

In the video released by JeM claiming responsibility for the attack, one man is seen with at least four guns and grenades, exhorting Kashmiris to join the militant outfit. Investigators say the video was recorded in January 2019.

Azhar formed the JeM in 2000, a year after he was released by Indian authorities in exchange for 155 hostages on board an Indian Airlines plane that had been hijacked to Kandahar, Afghanistan.  The JeM was sanctioned by the UN Security Council in 2001 for its association with Al Qaeda and the Taliban, and Azhar was blacklisted by the Security Council’s ISIL and Al Qaeda sanctions committee and designated a global terrorist in 2019 after a sustained campaign by Indian diplomats.

Azhar and his outfit have been blamed for orchestrating other high-profile attacks on Indian soil, including the 2001 attack on India’s Parliament in New Delhi and the strike on a frontline Indian Air Force base in Pathankot near the border with Pakistan in 2016.

“The JeM emerged very rapidly after the release of Masood Azhar in January 2000,” said Syed Ata Hasnain, a former Indian Army commander in Kashmir and now the chancellor of Central University of Kashmir.

Two weeks after the attack in February 2019, India claimed to have bombed JeM’s training camp in Balakot in Pakistan’s Khyber Pakhtunkhwa province. A day later, as Pakistan retaliated, a dog fight between Indian and Pakistani fighters led to the downing of an Indian jet and the capture of its pilot in Pakistan. India also claimed to have downed a Pakistani F-16 fighter.

As the hostile neighbors came to the brink of war, U.S. Secretary of State Michael Pompeo called for restraint, and President Donald Trump said his administration was trying to prevent further escalation.

“They’ve been going at it, and we’ve been involved in trying to have them stop,” Trump said in Hanoi on Feb. 28, 2019. An independence movement has roiled Kashmir since the early 1990s.

In its case against the terrorists, the investigation agency says it has “a lot of digital, forensic, documentary and oral evidence establishing a foolproof case,” and has information not only from Indian agencies, but also from foreign law enforcement agencies.

Experts say the charge sheet is significant, and once it is accepted by the court, it could put further pressure on Pakistan for its alleged inaction against terrorist groups.

“The significance of the charge sheet lies in the weight it carries as a legal document which contains evidence of the terrorist networks in Pakistan conspiring and sponsoring terrorist acts on Indian territory,” said Vivek Katju, a former diplomat who served as secretary in India’s Ministry of External Affairs.

“The organization and its leadership is in Pakistan. It is regrettable that MasoodAzhar, the first accused in the charge sheet continues to find shelter in Pakistan,” said Anurag Srivastava, spokesperson for India’s Ministry of External Affairs said while addressing reporters in New Delhi on Aug. 27. “Enough evidence has been shared with Pakistan but it continues to evade responsibility.”