Critics say the new scheme lacks foresight and excludes many who are vulnerable. 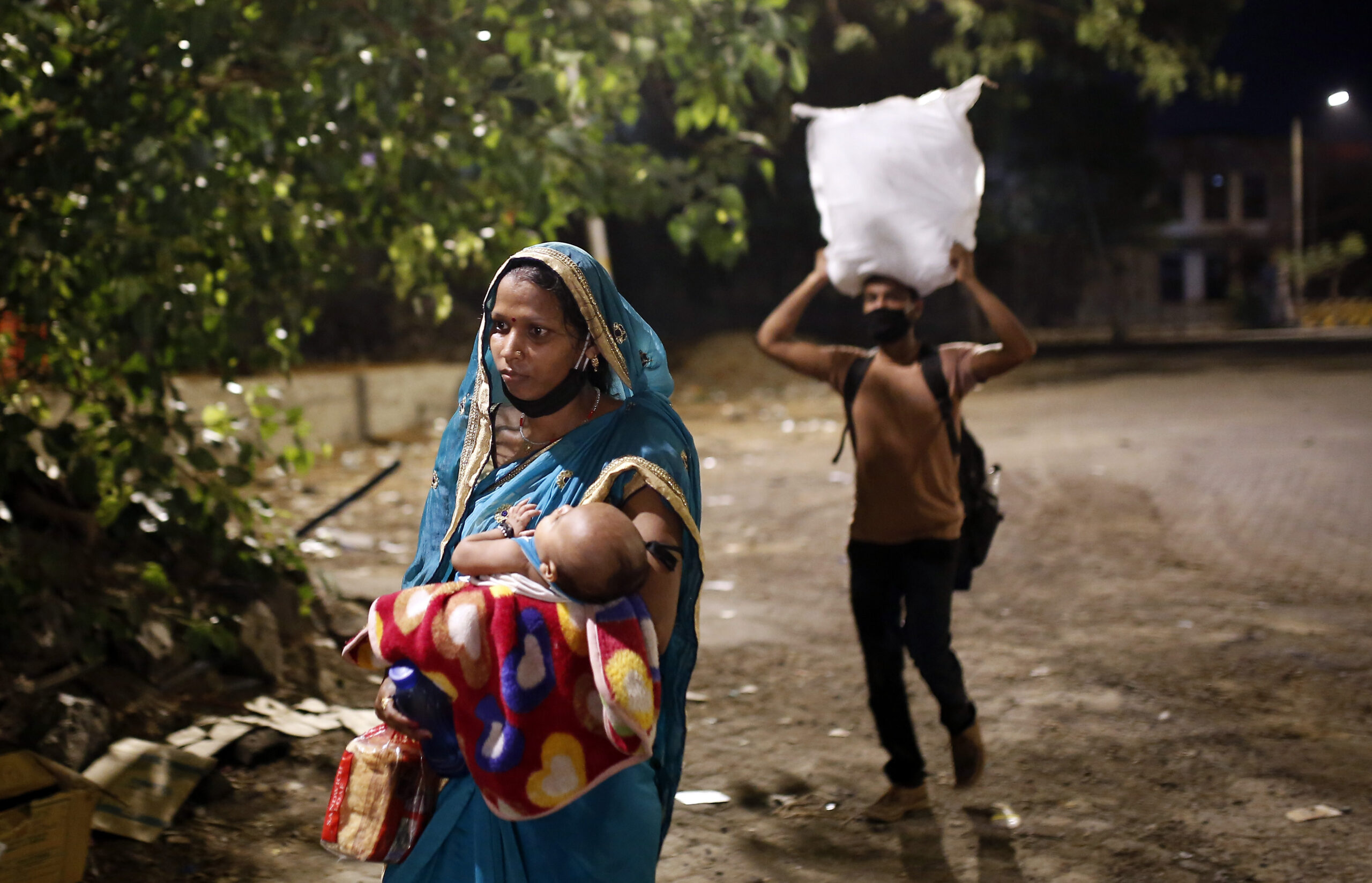 Migrants from Uttar Pradesh walk along the Eastern Express Highway in Mumbai, India on May 21, 2020. (Courtesy: Emmanual Yogini)

MUGHALSARAI, India—Some 4 million workers stand to benefit from a recent move by the government of Prime Minister Narendra Modi that recently relaxed eligibility criteria and enhanced payments for those who have lost jobs during the coronavirus pandemic.

But the scheme is not without its critics.

The Ministry of Labour and Employment announced on Aug. 20 that workers covered under the Employees’ State Insurance Corporation  scheme will get 50 percent of 90 days’ wages if they have lost or will lose their jobs between March 24 and Dec. 31 this year. This could benefit 4.1 million industrial workers, the government claims. Previously, the wage benefit was marked at 25 percent.

The country went into lockdown on March 25 to prevent the spread of the novel coronavirus.

As per labor laws, businesses with 10 or more employees must register with the ESIC. This allows their employees to get INR 21,000 ($281) a month, or $335 if they are disabled, to avail them of primary or tertiary healthcare benefits.

“We have updated the ESIC database with the latest employee records,” said P. K. Singh, assistant director (general), subregional ESIC office in Pandeypur, Varanasi. “Once we receive a formal notice, we will start releasing funds to the eligible people.

“This will help provide relief to the huge number of workers who have been rendered jobless by the pandemic,” he said.

Since Modi’s Bharatiya Janata Party was elected in May 2019, the opposition has been attacking it on rising unemployment in the country.

The two main reasons cited for this are the government’s decision to demonetize high-value currency notes (INR 500 and INR 1,000) in November 2016 and the introduction of a new indirect tax (the goods and services) in July 2017.

The currency measure severely hit demand in the cash-dependent country, resulting in the withdrawal of 86 percent of the money in circulation. The introduction of the goods and services tax was marred by many teething troubles and affected the small and medium-size enterprises in that are the major employers. When the Covid-19 crisis hit, the economy has not recovered from these twin shocks. The lockdown has resulted in businesses closing and more people losing their jobs.

The unemployment rate dropped dramatically from 23.5 percent in April to 7.43 percent in July, but there is still a lot of distress.

“Had the Modi-led government taken enough measures to address India’s unemployment problem in time, the country could have avoided the failure of its economic machinery,” said Ashok Singh, president of the Indian National Trade Union Congress in Uttar Pradesh.

“Despite the unemployment rate shooting up in December 2019, the lawmakers didn’t deem it necessary to include a section on unemployment insurance and assistance in the Social Security Code Bill submitted to the parliament the same month,” said K R Shyam Sundar, professor of human resource management at the XLRI -Xavier School of Managementin Jamshedpur.

“The government is always trying to avoid the financial burden of providing unemployment assistance,” said Sundar, an industrial relations expert and columnist.   “And this fiscal mathematics is preventing policymakers from designing, even after the pandemic, a comprehensive unemployment insurance and assistance scheme. Such is the poverty of labor legislation in a neoliberal India.”

In the early 1990s, India moved away from a Soviet-inspired planned economy to a more free-market economy, with mixed results. Despite rapid economic growth, economic inequality is stark.

The top 10 percent of the Indian population holds 77 percent of national wealth, according to an Oxfam report. Many Indians are unable to access health care and 63 million are pushed into poverty because of this every year, the report states.

The government’s unemployment policies have been criticized as political gestures. The relaxation in the ESIC scheme is also being viewed with skepticism.

“The law neglects a large sector of the work force — those employed in organizations with less than 10 people,” said Devesh Tripathi a lawyer from Chandauli in Uttar Pradesh who specializes in the ESIC.

“There is a lack of clarity on how this new ESIC modification will define unemployment,” he said. “Claims of employment will also be difficult to authenticate.”

The scheme allows a worker to declare himself as unemployed. To receive unemployment relief, the insured person should have been employed for at least two years and have contributed to the scheme a minimum of 78 days prior to losing their job.

Liberalization of the economy has meant a large influx of foreign funds and privatization of major government-owned companies. The United States invested $45.88 billion in India in 2019. The government has also set itself a disinvestment target of INR 21 trillion ($284 billion) in financial year 2020-21.

But this has come at a cost to laborers.

“The public sector is the backbone of a country,” said Ashok Singh. “But the government wants to privatize it. It could have helped solve the unemployment crisis to a great extent.”

Sundar believes the country will face a bigger unemployment problem before long.

“The manufacturing and services sector will introduce technology-related unemployment in a few years,” he said. “The government must prepare a strong social security system.”