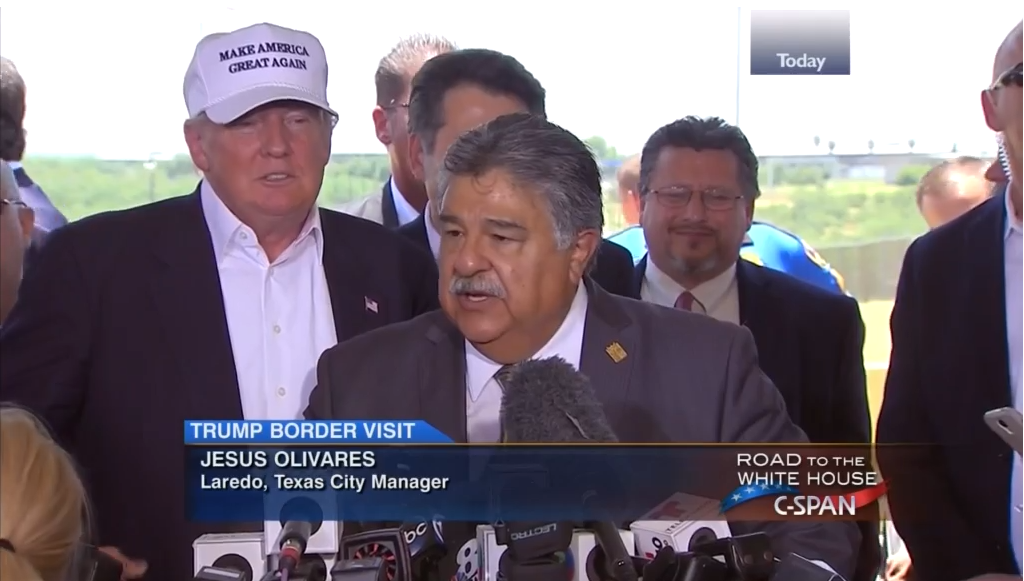 Jesus Olivares and then-candidate Donald Trump at a press conference on July 23, 2015 in Laredo, Texas. (C-Span)

A South Texas city paid extravagant compensation packages to two of its city managers — earnings that topped the annual salary of the president of the United States, according to a government watchdog.

Laredo, Texas, taxpayers shelled out $1.85 million in just two years to the two officials when they left their posts, according to Freedom of Information Act requests filed by OpenTheBooks.com, a nonprofit that tracks government spending. By contrast, the president’s salary is $400,000.

“Taxpayers in Laredo, Texas are being milked like dairy cows. Our auditors found that in a three-year period nearly $2 million paid-for by taxpayers flowed into the pockets of two city managers. In addition to the cash severance payouts, both managers also received lifetime health insurance benefits,” OpenTheBooks.com founder and CEO Adam Andrzejewski said in an email to Zenger News.

Laredo sits on the U.S.-Mexico border and almost 85 percent of its residents are Hispanic. Nearly one-third of its 262,000 residents live in poverty. Yet the two city managers were some of the most highly compensated in the nation, according to OpenTheBooks.com, which maps by ZIP code public employee salary and pension records.

Jesus Olivares, one of the city managers, received a $651,867 payout following his retirement in May 2017. That number stems from Olivares’ annual $259,745 salary as well as severance, unused sick leave and other perks, Joe Baeza, the city’s interim public information officer told OpenTheBooks.com in an email. Olivares announced his retirement as he faced possible administrative leave related to an FBI investigation into the city’s awarding of public contracts.

Horacio De Leon, Jr. succeeded Olivares as city manager and received a larger compensation when he stepped down in January 2019 less than two years after taking the post. His golden parachute included two years’ salary as severance, pay for remaining sick leave and vacation time, holiday pay, vehicle allowance, as well as wages for the partial month he worked as city manager. In all, De Leon made $880,486 last year in compensation.

The compensation both former city managers received, which includes salary and any other financial benefits, was much higher than their annual base salaries.

Baeza and Isabel Sosa-Castañeda of the city’s public information office did not respond to a request for comment.