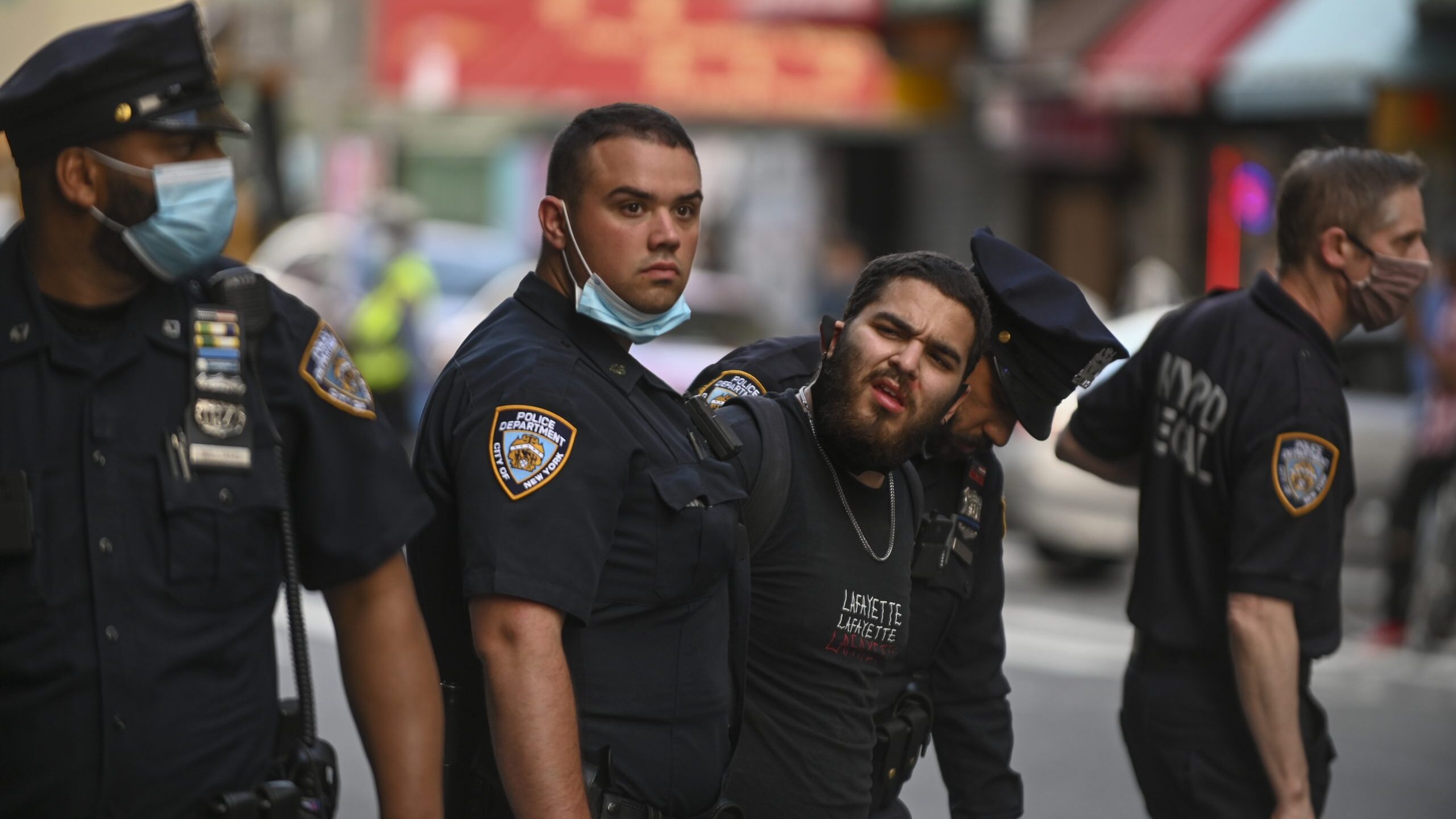 Officers from the NYPD at a major rally against police brutality on May 29, 2020. (CS Muncy/Zenger)

The normally quiet Upper East Side erupted into a street brawl between white supremacists and anti-fascists. Members of the Proud Boys, a white supremacist group with a violent history, allegedly attacked four Antifa protesters Oct. 12, 2018, during a violent clash near the Metropolitan Republican Club, where the leader of the Proud Boys had just finished giving an address.

The New York Police Department sought 12 suspects for rioting and assault. They had a complete list of all the Proud Boys on the scene because everyone had signed the register at the Metropolitan Club speech. What they lacked was the identity of the four assault victims, all presumed to be Antifa members. Disguised in black anti-surveillance garb during their counter-protest, the victims could not be identified by street camera footage. And the wounded Antifa supporters refused to come forward to press charges.

Eventually, the Manhattan District Attorney’s office used a controversial technique to further trace victims: a reverse location search warrant—also called a geo-fence warrant—which compiles the anonymous digital identity and location data from the cell phones, smart watches, laptops and tablets of all users who were in a given geolocation at a certain time.

“I became very concerned because I believe it violates Fourth Amendment requirements for particularized search,” Quart said. “Reverse location search is the exact opposite. It’s a fishing expedition to get people’s data without actual probable cause. That’s just antithetical to the Fourth Amendment.”

“The digital evidence identifies not people but devices,” said Andrew Quinn, general counsel to the NYPD Sergeants Benevolent Association. “Any investigative technique could be abused, but what prevents abuse is for an independent magistrate to review evidence and issue the warrants.”

The use of reverse location search warrants often remains undisclosed to the public, however, attorneys in the office of Manhattan District Attorney Cyrus Vance testified to using such a warrant during the court trial of several Proud Boys members.

In this particular case, the use of the digital reverse location warrant yielded no evidence used in the trial. Nonetheless, the Manhattan D.A. managed to nail two Proud Boys’ convictions based on video shot during the violent clashes.

Vance’s office declined a request for comment from Zenger News, as did the New York Police Department.

“You may be innocent but you may be able to provide invaluable eyewitness evidence,” said Quinn. “Reverse location search can be an incredibly useful tool in solving a serious crime. Son of Sam was solved because they tracked a parking ticket on his car in the area of one of the crimes.”

Under Quart’s bill, proposed in April, evidence from reverse location search warrants would become inadmissible in any New York court. The bill and a companion bill in the state Senate by Sen. Zellnor Myrie are pending in the New York State Legislature. No vote has yet occurred.

In the era of a burgeoning Black Lives Matter mass protest movement, banning reverse location searches appears timely. If allowed, Quart said, it creates a “double infringement of constitutional rights.” In addition to Fourth Amendment violations, it can “target protesters and accumulate data on thousands of individuals who are peacefully assembled to exercise First Amendment rights.”

Quart also objects to the lack of transparency. It’s unclear whose data is revealed, and how long the data will linger in official law enforcement files after an individual warrant is closed.

“The goal of the bill was really to create a first of its kind. It will outlaw the practice in New York State, blocking police and prosecutors from using reverse search warrants,” said Albert Fox Cahn, executive director of the Surveillance Technology Oversight Project, which helped author the proposed legislation. “I hope it will start a national trend because we will eventually need federal legislation to completely block the practice.”

Cahn said a reverse location search warrant “is an incredibly powerful way to monitor every single person who attends a mosque, a protest or a healthcare facility. It’s chilling and dystopian.”

“Everyone at the protest is visible,” counters Quinn. “Law enforcement is not permitted to go to the protests and take pictures to form a database. Almost all the videos of protestors are taken by the protestors themselves and posted to social media.”

“All people in the range are also having their data collected, even those who had nothing to do with it,” said Jerome Greco of the Legal Aid Society’s Digital Forensics Unit. “The problem is, you’re making innocent people possible suspects. Also, it’s not always accurate.”

In 2020, big tech companies control so much of the public’s personal information—even incidental apps, downloaded free of charge, can access and collect data for the developer to sell to the highest bidder—that constitutional privacy rights in the digital realm have become an issue.

For the past decade, Google has published a biannual report that reveals the number of government requests for user data, without differentiating the types of warrants or locale.

A Google spokesperson said that when a request comes in from a governmental agency or member of law enforcement, it is carefully vetted before any data is released. If Google perceives them as overly broad, requests are refused or challenged.

Unfortunately, much of the pushback comes at the discretion of Google and other tech companies. National communications privacy laws were last challenged in 1986. Back then, the digital world was less complex. Big tech companies played a more limited role in controlling public discourse.

“The problem is technology moves at an incredible pace, and the court system at a glacial pace,” said Greco.

That’s why legislation is so important, advocates say.