One word of Tamil wins over a nation and now the U.S. presidential election is next.
By Anindita Ghosh August 26, 2020
Facebook
Twitter
Linkedin
Email 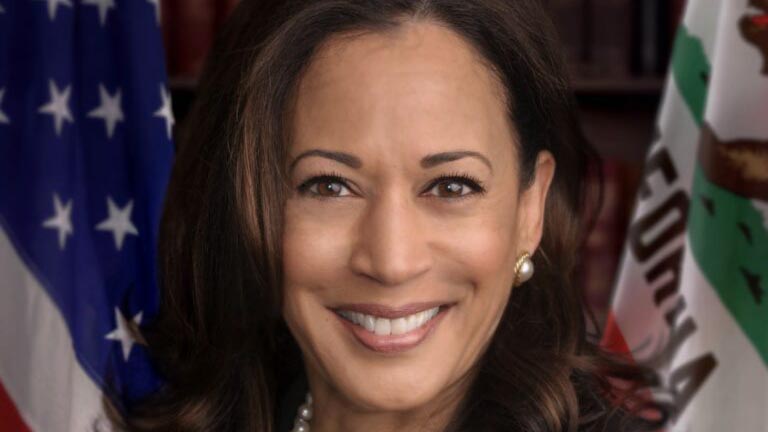 Residents in Sen. Kamala Harris’ ancestral village haven’t seen her in years, but they are praying for her victory by sacrificing coconuts in Hindu temples. Others are pasting up posters or cheering the vice-presidential hopeful on social media.

In Tamil Naidu, she would win overwhelmingly among her landsmen.

“In India, people who put up posters for Harris are breaking coconuts in temples,” said Harris’s uncle, Balachandran Gopalan. A New Delhi-based academic, Gopalan explained that breaking coconuts is a form of ritualistic worship for Hindus, especially those from south India. “I have also done the same,” he added. When his niece was sworn in to the U.S. Senate in 2017 by Joe Biden, he attended the ceremony.

Colorful posters wishing Harris victory are on display throughout her grandfather’s ancestral village, Painganadu Thusalendrapuram, in the Indian state of Tamil Nadu.

The poster went viral after Harris’s niece, Meena Harris, posted it on Twitter. “This is from Tamil Nadu, where our Indian family is from,” she wrote. “It says: ‘PV Gopalan’s granddaughter is victorious.’”

Today Harris has few living relatives in her home state besides an aunt, Dr. Sarala Gopalan, who lives in Chennai, the state’s capital. Still, the candidate’s campaign is eager for Harris to be seen as Indian American. In her Democratic National Convention speech, she spoke about her chithis (“aunts” in Tamil). While Americans had to google what it meant, the Tamil-speaking world was elated to hear a word in their mother tongue from the vice presidential nominee.

The villagers Zenger interviewed in Painganadu Thusalendrapuram—including those who were hanging posters—knew of the candidate more from the American news than from any living connection. But for the 2020 elections, the Democratic Party is going all-out to win the Indian vote and is using Kamala Harris’s roots as its calling card.

The Asian Indian population in the U.S. increased from 396,000 in 1980 to over 2.7 million in 2010, according to the website Statista. The group is one of the fastest-growing ethnicities in America, and with high levels of education and financial status, Asian Indians are gaining political clout. In matters of American foreign policy, India has become an important player, both as a venue for American business interests and as a strategic counterweight to China’s strength. As a result, there have been clear attempts to woo Indians’ support from Democrats and Republicans.

During the 2016 general elections, the Hindu American Foundation and the Republican Hindu Coalition threw their weight behind the Trump campaign. In return, Trump repeatedly promised Indians in general and Hindus in particular his support should he become president.

Harris—the first Indian-American and African-American woman to run for vice president—has often spoken of how her mother, Shyamala Gopalan Harris, had a strong influence on her.

“Shyamala was an exceptional woman,” said Balachandran Gopalan. “She was a hard taskmaster and pushed her children to give their best. No wonder Kamala keeps talking about the influence her mother had on her life.”

Harris opened her vice-presidential nomination acceptance speech by remembering her mother and regretting that she was not there to see her success. “My mother taught me that service to others gives life purpose and meaning,” she said.

Her mother studied for a master’s in nutrition and endocrinology at University of California—Berkeley starting in 1958. She completed her Ph.D. before venturing into breast cancer research.

“She went to study science in the U.S. at a time when very few American women were studying science, forget unmarried Indian women,” said Gopalan. “My father had no objection to her going for higher studies as long as she could get a scholarship and fund her studies.”

Shyamala Gopalan Harris joined the civil rights movement in Berkeley in the 1960s and met Donald J. Harris, a Jamaican graduate student, at a protest. They married in 1963. After their divorce in the 1970s, Kamala Harris would visit Chennai frequently with her mother and sister.

In a YouTube video with Mindy Kaling late last year, Harris revealed that her grandfather was “mischievous,” making her French toast when his strictly vegetarian wife was out of town. “People have these stereotypes,” said Harris. “My grandfather was very progressive.”

In her bestseller “The Truths We Hold: An American Journey,” the Democratic candidate wrote at length about her family in India and how she was close to them: “They lived many thousands of miles away, and we rarely saw one another. Still, through many long-distance calls, our periodic trips to India, and letters and cards written back and forth, our sense of family—of closeness and comfort and trust—was able to penetrate the distance.”

“Kamala would visit India with her mother very often, almost every year when both my parents were alive,” said Gopalan.

Harris’s grandfather died in 1998; his wife Rajam in 2009. But Gopalan has kept in touch with his niece and has closely followed her political career. Her vice-presidential nomination was no surprise to him. “I have been following the news analyses in the U.S. media and election polls and trends,” he said. “She has a good chance unless Trump comes up with a U.S.-made vaccine for Covid-19 before September or something equally dramatic.”

For Gopalan—like the residents of his ancestral village—his niece has already won.