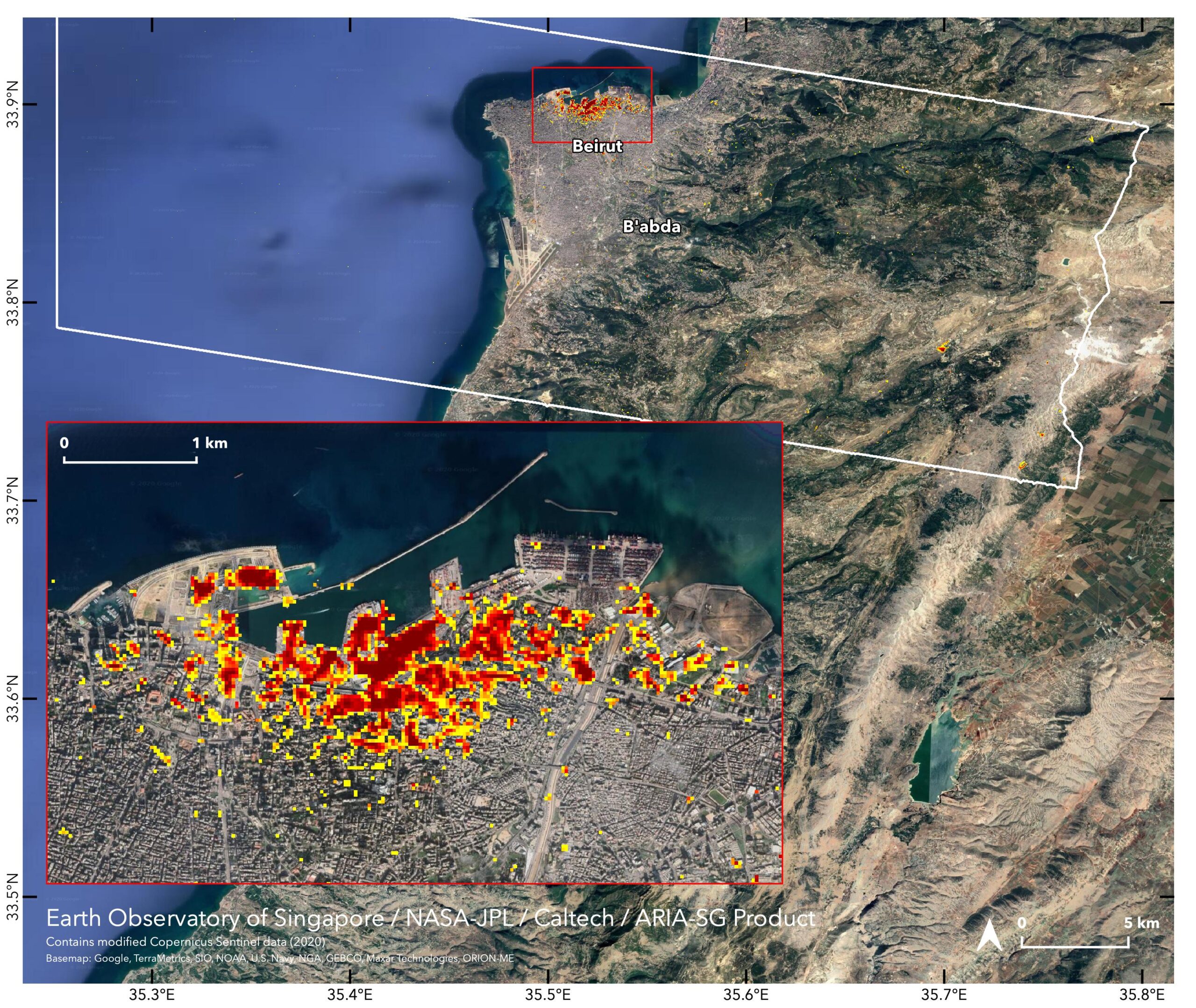 NASA's Advanced Rapid Imaging and Analysis (ARIA) team, in collaboration with the Earth Observatory of Singapore, used satellite-derived synthetic aperture radar data to map the likely extent of damage from a massive Aug. 4 explosion in Beirut. Synthetic aperture radar data from space shows ground surface changes from before and after a major event like an earthquake. In this case, it is being used to show the devastating result of an explosion. (NASA/JPL-Caltech/Earth Observatory of Singapore/ESA)

BEIRUT — A Beirut jeweler is turning tragedy into art, making necklaces and bracelets out of glass fragments created by the massive explosion that rocked the city early this month. Profits from the jewelry, which bear the green cedar and red bands of the Lebanese flag, will go to local charities assisting victims of the Aug. 4 blast.

The fine jeweler, L’Atelier Nawbar, has longstanding roots in the Lebanese capital, beginning in 1891. Known for creating elegant statement designs rooted in tradition, the jeweler, which also sells its pieces at Harrod’s, is now headed by sisters Dima and Tania Nawbar, the fourth generation of jewelers. In a post on the company’s Instagram account, the sisters shared their flagship store in downtown Beirut was significantly damaged by the explosion.

“Fragments of glass fell around us, what would become of you we asked,” the post noted. “These windows have seen us through. Little pieces of them brought together in an 18k gold mosaic of love for our Watan (homeland) signifies how little scraps can make art.

“We will rebuild our Lebanon, quietly efficiently and swiftly, like little ants rebuilding one business at a time.”

Fragments of glass fell around us, what would become of you we asked. These windows have seen us through. Little pieces of them brought together in an 18k gold mosaic of love for our Watan ‏Signifies how little scarps can make art. We will rebuild our Lebanon, quietly efficiently and swiftly, like little ants rebuilding one business at a time. Sales from these charms will benefit the initiative led by Dr. Riad Sarkis – a highly reputed Lebanese surgeon (Oncology & bariatric surgery) & Professor at the Université St. Joseph – in partnership with Emergency Relief for Lebanon who are working relentlessly to rebuild Beirut. . . . #beirut #beirutexplosion #rebuild #art #riseagain #lateliernawbar

The investigation continues into the cause of the blast at the Beirut port, which leveled major sections of the city, killing more than 200 and injuring more than 5,000, according to the country’s National News Agency. Shortly after the blast, government officials blamed the explosion on 2,700 tons of ammonium nitrate, an agricultural fertilizer that was being stored near the port.