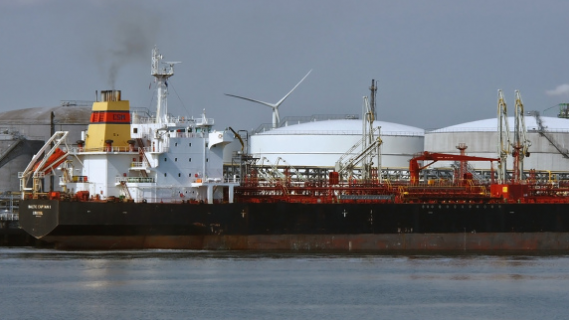 The M/T Luna, one of the vessels that had its oil seized is pictured in an undated photograph in an unknown location. (U.S. DOJ)

When the United States intercepted and seized illegal shipments of Iranian fuel bound for Venezuela, the siege of Venezuelan leader Nicolas Maduro tightened.

According to the U.S. Department of Justice, four tankers carrying just over 1.1 million barrels of fuel from the Iranian Islamic Revolutionary Guard Corps, known as the IRGC, were stopped and comandeered. The foreign-flagged ships were identified as Bella, Bering, Pandi and Luna, which were brought to Houston, Texas. Last year, the U.S. Department of State designated the IRGC a foreign terrorist organization.

The U.S. has accused Iran of using foreign-owned and flagged ships to violate sanctions on both Venezuela and Iran.

In May, the Iranian government sent five oil tankers to Venezuela with 1.5 million barrels of gasoline.

U.S. Navy Vice Admiral Craig S. Fuller, commander of U.S. Southern Command, said that the Maduro regime and its allies continue to pose a serious threat to freedom and democracies for neighboring countries of Latin America.

“The drastic growth of drug trafficking that comes from Venezuela is a serious threat to North and South America,” he said.

For Lila Urdaneta, an ordinary citizen in exile in Miami, the seizure of fuel affects “everyone, but the guiltiest is the regime, which did not maintain the plants so that they would collapse and there would be no production. They thought about having gasoline from abroad and managing it to maintain control,” she said.

Venezuela, one of the largest oil reserves in the world, has run out of gasoline due to the deterioration of Petróleos de Venezuela. The state oil company suffers from years of mismanagement, underinvestment, and corruption. The Trump administration has ratcheted up sanctions on the Maduro regime.

Following the seizure order, the Iranian ambassador in Caracas, Hojat Soltani, denied that his country had anything to do with the ships. “The ships are not Iranian, and neither the owner nor its flag has anything to do with Iran,” the diplomat said on Twitter.

Petróleos de Venezuela SA, a state company, began operations on January 1, 1976, and was nationalized by President Carlos Andrés Pérez. The company appeared in the Global 500 list of the “Fortune” Magazine in position 39 among the largest companies in the world.

The oil firm has the largest oil reserves on the planet, reaching at the end of 2013 a total certified sum of 298,353 million barrels, which represent 20% of the world reserves.

The company had 140,626 employees until 2019, and a workforce hired in the same year of 16,168 employees. Citgo is one of its subsidiaries in the United States.

In 2019, Petróleos de Venezuela SA reported a decline in crude oil production from 1.1 million to 768,000 barrels per day.