Lissu returns to political life after an assassination attempt. 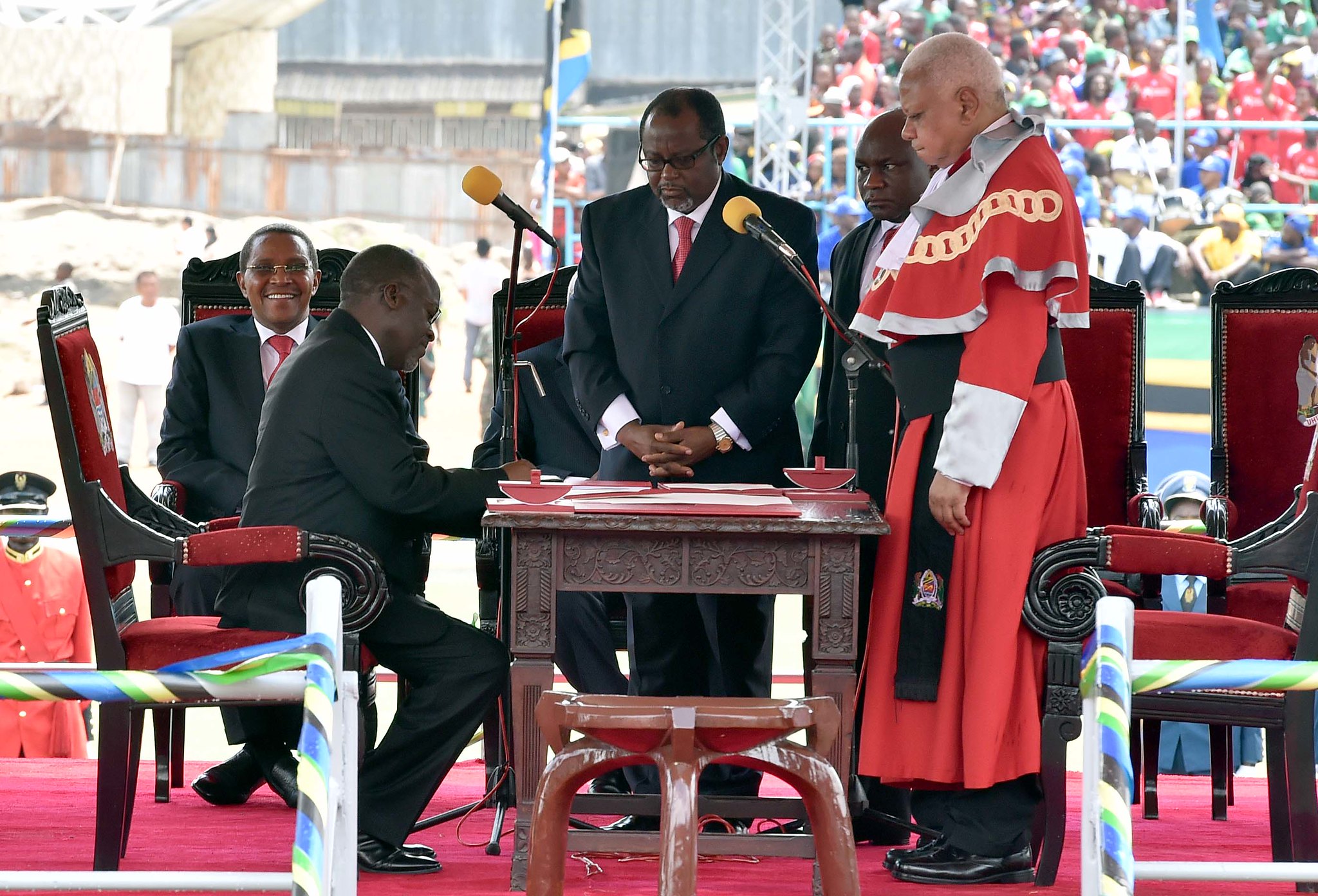 President of the United Republic of Tanzania John Pembe Magufuli signs the oath of office after being sworn in on May 11, 2015 at Uhuru Stadium in Dar Es Salaam. (Government of South Africa-GCIS)

Chadema MP Tundu Lissu survived 16 gunshot wounds in an unsolved assassination attempt outside his Dodoma residence in 2017 and has spent the past three years living in self-imposed exile in Belgium.

Lissu, the former president of Tanzania’s bar association, the Tanganyika Law Society, returned home in June to announce his intention to run against Magufuli, who was elected under the ruling Chama Cha Mapinduzi party banner in 2015 after promising to crack down on corruption and improve infrastructure in the East African country.

The prominent lawyer, who has long been a thorn in Magufuli’s side and has been arrested multiple times on charges ranging from insulting the president to disturbing public order, said Tanzanians deserve a change from the long-ruling CCM.

“Our biggest problem in Tanzania is our politics, our constitution and the poor leadership that has existed for a year and if we want to make a change that is desperately needed by Tanzanians, then the answer is not promising the same things that we’ve had for more than 70 years,” said Lissu.

His final arrest came one month before the attempted assassination after Lissu revealed that Canada had impounded a plane bought for national carrier Air Tanzania because of a financial claim against the Tanzania government.

Chadema party chairman Freeman Mbowe, who was sent to hospital with a broken leg after being beaten by unknown assailants the day after Lissu announced his candidacy, said his party seeks to unite the country.

“Magufuli’s government thrives on the oppression that is why we are calling people of Tanzania to stand to show up in large numbers on October 28,” said Mbowe. “We want to formulate a system that will work for us and Chama Cha Mapinduzi. We have no intention of revenging.”

As in neighboring Kenya, Tanzania’s federal government consists of the president and the National Assembly. The president is elected by direct popular vote every five years and is eligible to run for a second term.

Magufuli is a polarizing figure for many Tanzanian voters. He has been accused of clamping down on the opposition, gagging the media and forcing his way on citizens while also being celebrated for prioritizing industrialization and job creation through the private sector.

“Magufuli is loved and hated at the same time,” said Dodoma resident Kabadi Chule. “In 2015 people thought he was the saviour only to be disappointed by the impunity under his watch.”

Fatma Karume, a human rights activist from Dar es Salaam, is concerned about the integrity of the upcoming election.

“The shopping list of hard work bought by the laws to be paid for by taxpayers cannot justify the destruction of fundamental principles such as breaching of our constitution by creating impunity for the president, vice-president, chief justice and the speaker contrary to the constitution by destroying the independence of the judiciary and parliament,” said Karume. “In five years, Magufuli has managed to unconstitutionally re-engineer our society in ways that many of us never imagined possible and ultimately it will be for the voters to decide in October if their votes are properly counted by an electoral commission whose independence is questionable.”

For many voters, the biggest consideration may be how it affects their personal finances. Despite its richness in natural resources and having a burgeoning tourism sector before the coronavirus pandemic swept the globe, most Tanzanians live in poverty and are dependent on subsistence agriculture.

Since Magufuli took office as well as under his predecessor, Tanzania has seen relatively high annual economic growth, averaging 6 to 7 percent a year, according to a 2019 World Bank report. While the poverty rate in the country has gone down, the absolute number of poor citizens has not thanks to the high population growth rate.

“Tanzania has been growing very rapidly for several years,” said Aly-Khan Satchu, the CEO of Rich Management Limited, an East African investment advisory company. “Over the past fifteen years it has been growing with over seven per cent, it’s quite unusual to have countries to have such a prolonged economic growth. I hope it continues. The sources are many: one is population growth that is growing with two per cent [and] the growth is very broad-based many sectors account for it. There is a story of transformation away from agriculture into many sectors such as manufacturing of mattress and food processing.”

But not all Tanzanians are benefiting from this economic growth, according to fish trader Stefano Furuka.

“As much as the president has cracked down on corruption, we small-scale farmers have nowhere to take their products because Chinese investors have grabbed everything,” said Furuka.