Spanish authorities have seized 1,000 plants and six Hells Angels members in a series of raids in the Canary Islands. 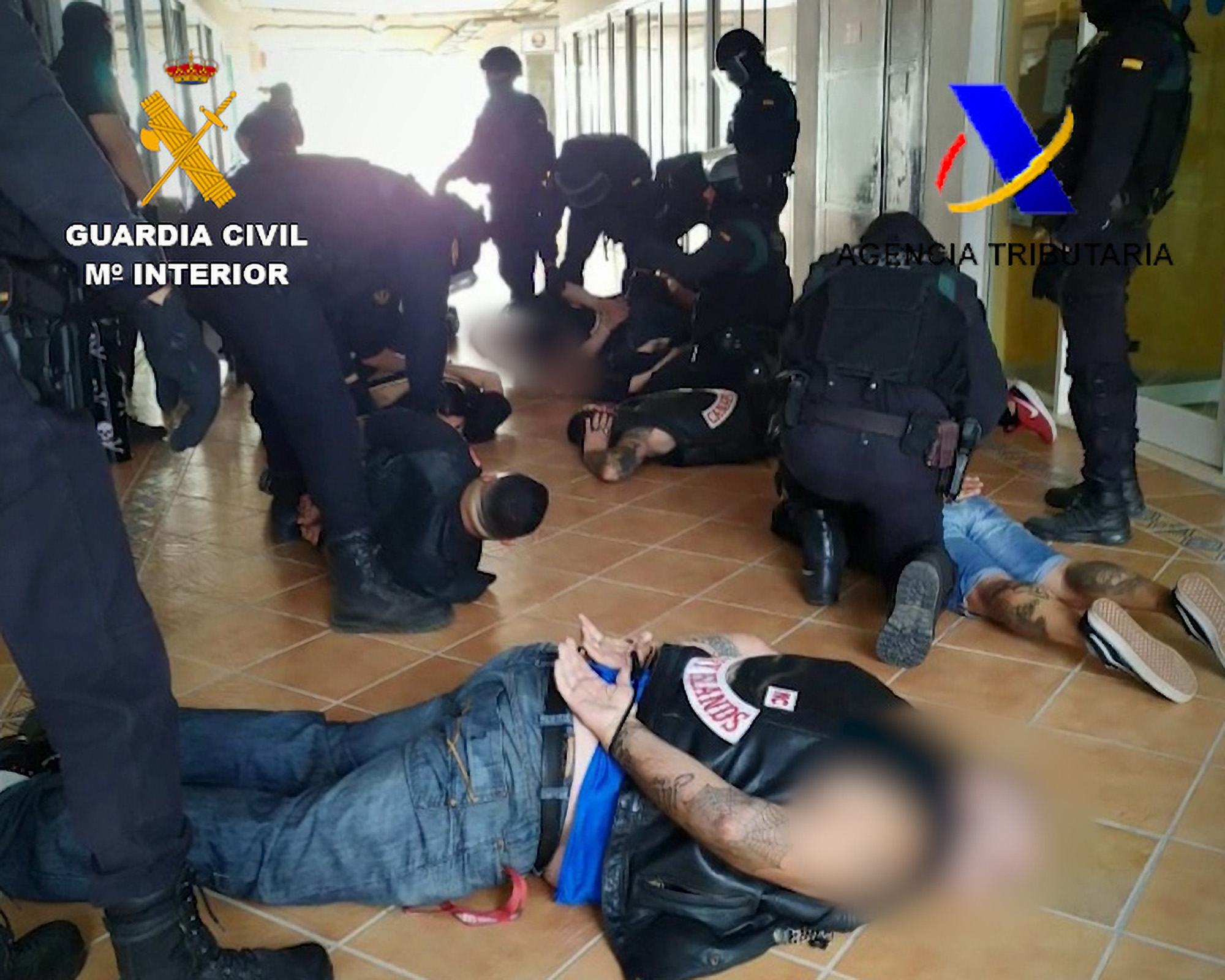 A Hell's Angels gang member lies on the floor under arrest in the Canary Islands in an undated photo. (Real Press)

Six Hells Angels bikers were recently arrested in a major drug bust on the Spanish island of Tenerife, the Spanish Civil Guard has announced.

The coordinated, large-scale operation saw the members of the notorious motorcycle club arrested on charges of production and distribution of cannabis, said Inmaculada Gonzalez, spokeswoman for the the guard’s office in Santa Cruz, Tenerife.

Six houses and two crops of cannabis plants were raided simultaneously by officers of the Civil Guard and Agencia Tributaria, the Spanish tax agency, in the towns of Guargacho, Garachico and Adeje on island, located in the Spanish region of the Canary Islands.

Gonzalez said the Civil Guard relied on cooperation from authorities in other European countries, as international arrest warrants and extradition requests had already been issued for several of the arrested men. The six alleged drug ring included two Germans, one Pole, one French citizen, a Serb and one Spanish national. All had criminal records, the Civil Guard said.

The operation was the result of a comprehensive investigation that began September 2019 and included the cooperation of police and customs in Denmark, Norway and Germany.

One of the suspects, charged with overseeing production at one of the cannabis crops, had an extradition warrant from Serbian authorities. In Serbia, he had been linked to the notorious international Pink Panther criminal gang, accused of robberies and jewelry thefts that total more than $200 million.

Another suspect is wanted by French authorities for crimes linked with the procurement of drugs, police said.

The farming, production and distribution of drugs finance the activities of Hells Angels in the Canary Islands. Other sources of income include the operation of tattoo shops and providing security services at brothels, the Civil Guard said.

In addition to confiscated plants, the raid removed large amounts of already processed cannabis dried and readied for distribution. Also seized were seven illegal weapons, two carbine pneumatic weapons, a taser gun, a truncheon, a machete and two knives, as well as a GPS and 20 electrical devices, the content of which is still being examined.

The Hells Angels Motorcycle Club is one of America’s most notorious exports. Founded in California in 1948, it now has chapters worldwide. The club’s members are often recognized by their Harley-Davidson motorcycles and leather vests adorned with the club emblem, a winged skull.

Today, the club, which has often been associated with organized crime, such as drugs, prostitution and extortion, is active in 58 countries worldwide, 41 in Europe. The club has an estimated 2,500 members worldwide and is a major source of drug-trafficking, the U.S. Department of Justice reports. Gonzo journalist Hunter S. Thompson offered a rare inside look at the gang and its criminal and violent ways in his 1967 book, “Hells Angels: A Strange and Terrible Saga.”