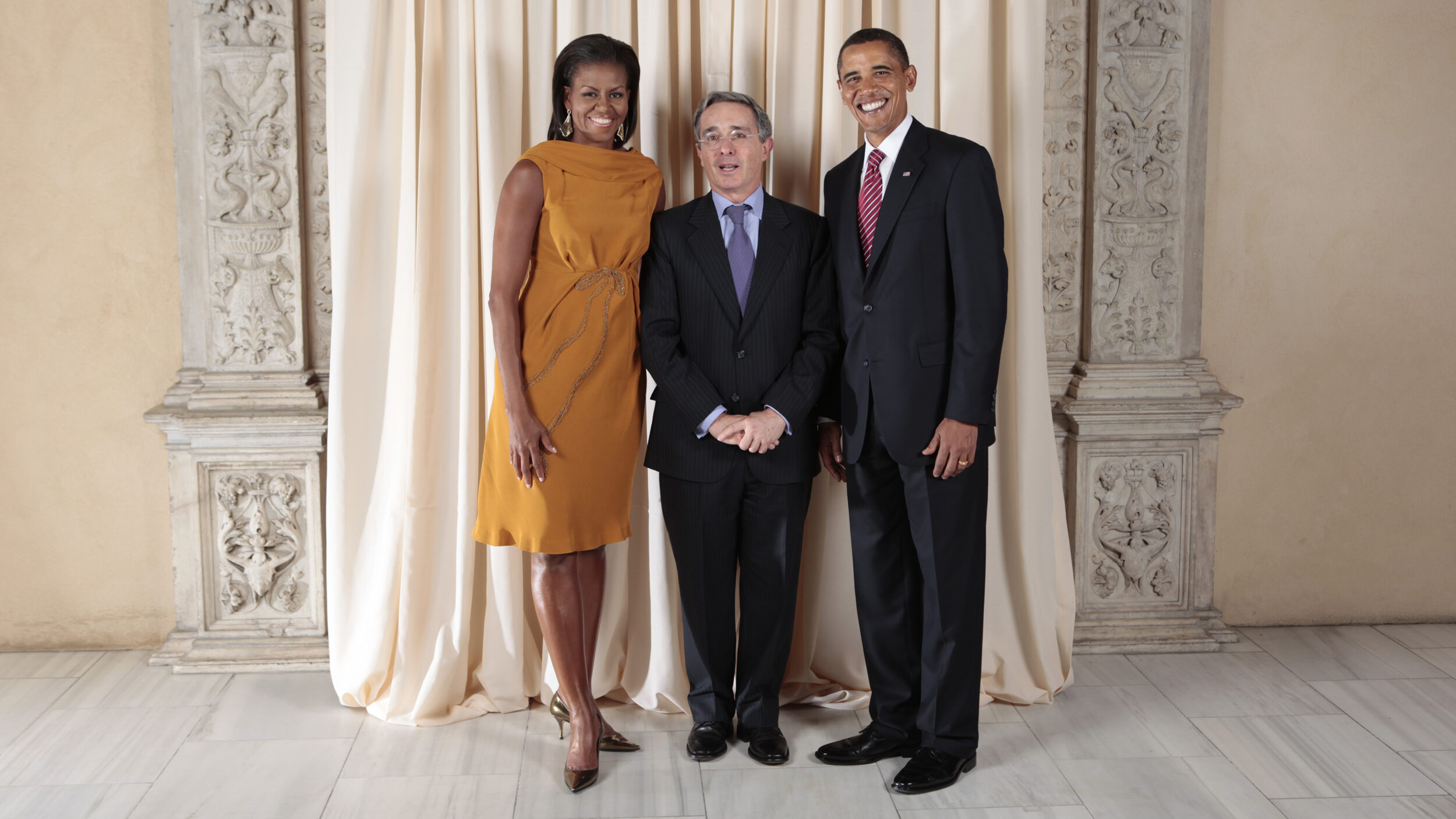 President Barack Obama and First Lady Michelle Obama pose for a photo during a reception at the Metropolitan Museum in New York with, H.E. Alvaro Uribe Velez President of the Republic of Colombia, Wednesday, Sept. 23, 2009. (Official White House Photo by Lawrence Jackson)

A political earthquake hit Colombia earlier this month — and the aftershocks continue. The Investigative Chamber of the Supreme Court of Justice placed the former president and senator, Alvaro Uribe Velez, under preventive house arrest.

This is the first time in modern Colombian history that an ex-president has been detained. Uribe is seen as the most relevant political Colombian figure of the 21st century. (In December 1957, Gustavo Rojas Pinilla, the military general who seized power through a coup d’état, was arrested and sent to a Navy frigate in the Caribbean.)

Uribe, 68, is now confined to his ranch, ill with Covid-19. He’s expected to spend a year in detention, while the Supreme Court investigates charges he tampered with witnesses.

“The deprivation of my freedom causes me deep sadness for my wife, my family, and for the Colombians who still believe that I have done something good for the country,” wrote Uribe on Twitter.

Colombian House of Representatives member Margarita Restrepo noted the sharp contrast between Uribe’s detention with the freedom of guerrilla heads, protected due to the 2016 peace accords, despite their crimes.

“I do not understand justice in Colombia… Drug traffickers and rapists of children of the FARC: free… But the man who has fought the three previous plagues: prisoner,” Restrepo said.

Uribe represents the right and his opponents the left, in a nation stained by internal conflicts and division since its inception 211 years ago. That includes a half-century fight with FARC, the communist guerilla Revolutionary Armed Forces of Colombia.

The former president governed Colombia from 2002 to 2010.

He inherited a country in flames, with the guerrillas controlling large portions of the country, around 10% of the municipalities. Kidnappings, extorting money from motorists, bombing little towns with artisanal gas pipes, and raiding villages in the eastern plains and Amazonian jungle were commonplace.

In 2006, Uribe accomplished a peace accord with the right-wing paramilitary group United Self-Defense Forces of Colombia (AUC), accused of assassinations, kidnappings and massacring the civilian population in its war against leftist guerrillas.

At the end of his mandate, Uribe supported Juan Manuel Santos, his defense minister, for the presidential bid. Santos won the election, but distanced himself from Uribe. He focused on achieving a peace agreement with FARC.

The Santos administration signed the peace with the guerillas, though his government lost a referendum on the ratification of the pact.

Uribe and his Democratic Center party led the opposition to the agreement, accusing FARC of various war crimes: rape, the enrollment of minors and cruel incarceration of hostages. It asked that no guerrilla member be pardoned.

Yet, as a result of negotiations, Santos received the Nobel Peace Prize in 2016 and 8,000 FARC combatants put down their weapons.

In 2018, Ivan Duque Marquez was elected president of Colombia with Uribe’s support. The former president gained a seat in the Senate with the maximum vote in the country: more than 800,000 votes.

Now, however, Uribe faces the most difficult battle of his life.

On August 12, Uribe, who is isolated on his El Uberrimo ranch, due to coronavirus, wrote on Twitter: “Today I was reported as prisoner #1087985 for confronting testimonies against me bought by the FARC, its new generation and allies.”

The same day, the Supreme Court suspended Uribe’s Senate seat and ordered a replacement named. He stepped down from his Senate seat last week.

Uribe’s political woes began in 2014, with a lawsuit he filed against his nemesis, Senator Ivan Cepeda, a member of the left-wing Democratic Pole. In congressional debates, the legislator presented declarations from former paramilitaries who said the ex-president and his brother Santiago had founded the Metro Bloc of AUC, a paramilitary group.

In the lawsuit, Uribe accused Cepeda of presenting false witnesses and manipulated them to lie about his actions.

The lawsuit was archived, but resurfaced in 2018, after a video of former paramilitary commander Juan Guillermo Monsalve, who was serving a sentence at La Picota prison, in Bogotá, was disclosed.

In the video, taped in 2013, Monsalve said the Guacharacas rural estate, property of the former president, was the location for the formation of the Metro Bloc, which operated in the Antioquia department, where Uribe was governor from 1995 to 1997.

Cepeda interviewed Monsalve, who said Uribe was a Metro Bloc co-conspirator when he was a worker at the Guacharacas ranch.

This time, the Supreme Court turned the tables. It opened an investigation into the former president for attempting to manipulate witnesses who testified the Uribe family helped found the Metro Bloc.

Uribe has denied any allegations against him about involvement in paramilitary activity.

Duque, the president of Colombia, published a video on social media where he supports Uribe: “It hurts, as a Colombian, that many who have wounded the country with barbarities defend themselves in freedom,” Duque said. “And that an exemplary public servant who has held the highest position of the state cannot.”