Covid-19 made eating out and delivery impossible. So restaurants found a novel way to feed a nation. 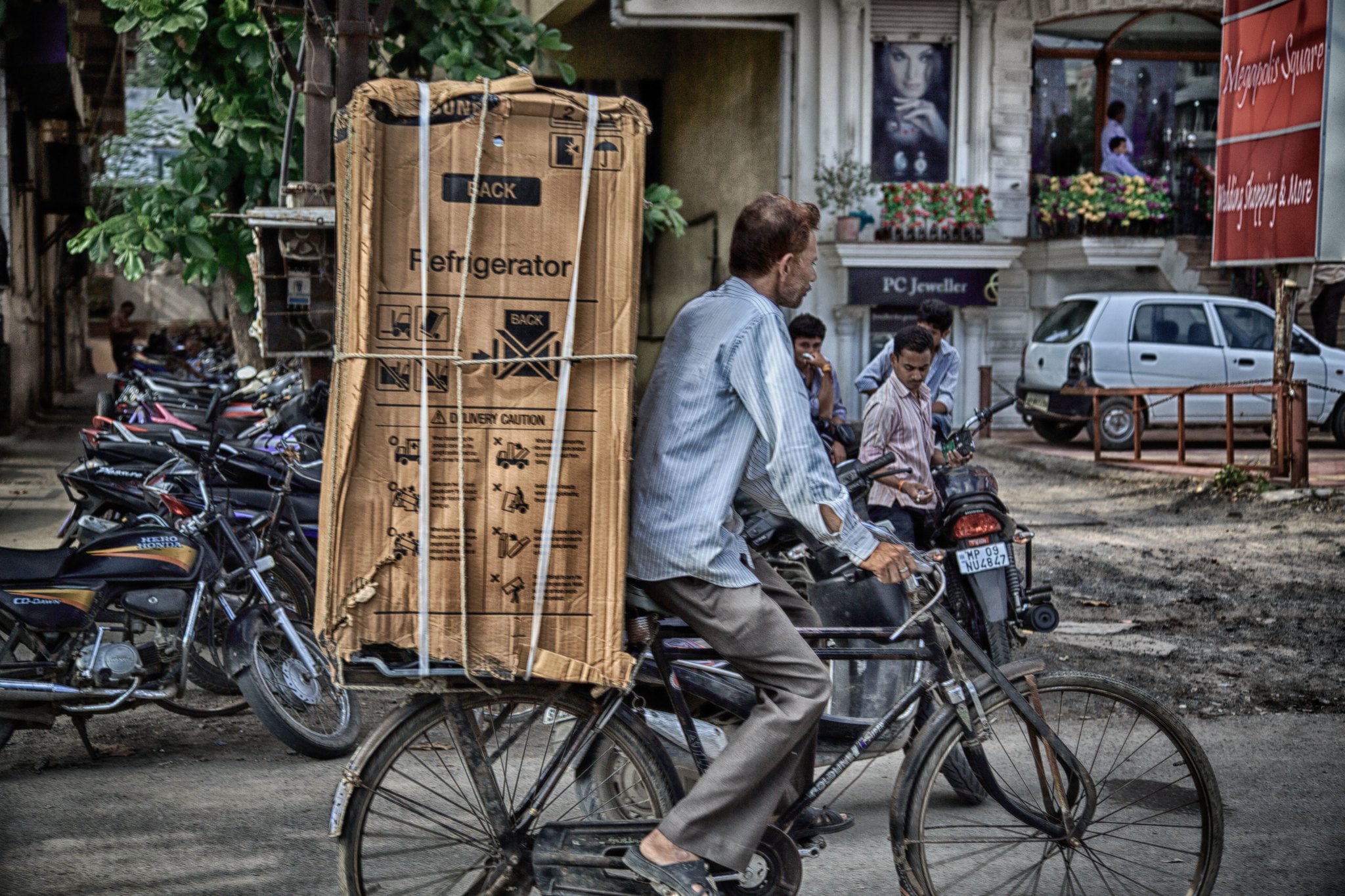 A man rides a bike in India with a boxed refrigerator in an undated photo. (John Hoey via Flickr)

Indians — especially from big cities like New Delhi or Mumbai — love eating out. But with a nationwide lockdown still in place in many sectors, it is not an option. Even home deliveries aren’t viable. Delivery agents have caused panic and mandatory quarantine.

So some restaurants have whipped up a delicious alternative.

To keep their patrons happy — and businesses running — restaurants are now sending food, not as fully cooked meals, but Do It Yourself, or DIY kits. The kits have detailed instructions and perfectly proportioned ingredients.

Food lovers just follow directions and have the meal they desire.

“At first I thought it was weird — why slog in the kitchen when you can order in?” said Nausheen Tareen, 35, a New Delhi-based public relations professional. Tareen and her husband, Amin Ali, ate out at least two or three times a week before the pandemic, patronizing both fine dining in Delhi and traditional small eateries in the capital’s historic Walled City.

“When you do it, you see it is so much fun!” said Tareen, now a convert to DIY meals. She is the rule rather than the exception among young, urban Indians. They are the mainstay of the country’s vibrant culinary culture.

The lockdown began March 24 and hit the restaurant business hard.

In 2019, India had about 2 million restaurants employing 7.3 million people, according to the National Restaurants Association of India’s Food Services Report. They generated revenues of $56 billion. But since the pandemic began, many restaurants in places such as New Delhi’s Khan Market — one of the most expensive real-estate locations in the world — have closed.

“With restaurants shut for more than five months, the sector has lost about $25 billion,” said Anurag Katriar, president of the association. “About 3 million people have lost their jobs.”

“Half of a restaurant’s expenses are overheads — rent, wages, taxes,” he said. “How can you earn nothing and keep paying these?”

People staying away from restaurants are not ordering in, either, Katriar said. “We are getting only a third of the orders we used to get.”

Food-delivery industry leader Zomato painted a similar picture in its State of Indian Restaurant Industry report. Some 10% of India’s restaurants have permanently shut, and another 30% may never reopen.

Tough times have forced businesses to innovate — the DIY kits are one example.

Kampai, which serves Japanese cuisine, is one of the restaurants in New Delhi that has offered the DIY kit to its patrons since June. On the menu: ramen, donburis, cocktail kits.

“The response has been good,” said Avantika Sinha, founder, and managing director.

The quarantine has seriously impacted the industry, but it’s also provided inspiration.

“The popularity of #quarantinecooking inspired us,” said Priyank Sukhija, MD and CEO of First Fiddle F&B, a private restaurant chain. The hashtag went viral on social media, with people posting pictures of what they were cooking while stuck at home.

Sukhija started the DIY kits at his Asian restaurant, Plum by Bent Chair, in July. “The concept was long overdue,” he said. “It is here to stay. Our kits are a careful selection of bowls, pots, gravies, entrees along with gyozas that can be easily cooked and enjoyed at home,” said Sukhija.

Such kits were already popular in New York and London pre-pandemmic — but new to India. And while they generate sales, restaurants are curating only the best options on their menus.

Restaurant owners in Delhi are also looking to the government for help.

“In the UK, the government is subsidizing eating out,” said Katriar. The Eat Out to Help Out scheme gives a 50% discount to anyone eating or drinking at a UK restaurant from Monday to Wednesday, up to a maximum bill of £10, about $13.

“This scheme will have a positive effect on other sectors, such as labor, agriculture, dairy and transport,” said Katriar.

In Delhi, restaurants have been allowed to operate at half the capacity since last month. But they claim an added financial struggle: No green light to serve liquor. Delhi’s deputy chief minister Manish Sisodia on August 20 asked the excise department to allow restaurants to serve liquor at tables, though bars will remain closed.

“This will be a great help to the industry,” said Zorawar Kalra, founder, Massive Restaurants, which owns popular eateries such as Bo-Tai and Made in Punjab.

“Sales are at 10% to 15% of pre-Covid levels now. Allowing liquor to be served will attract more eaters. Dinner revenue will increase,” he said.