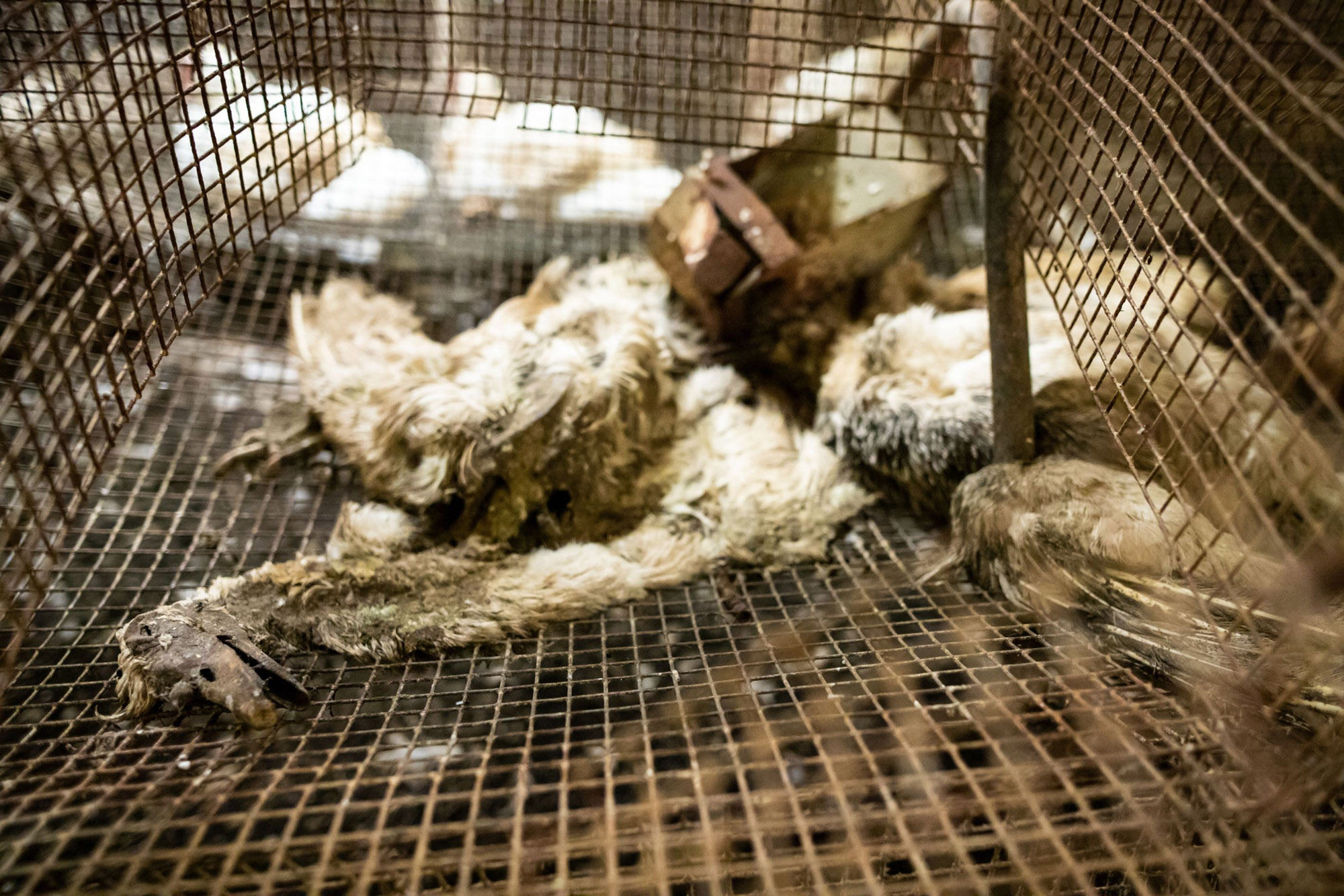 A dead duck in a maggot- and rodent-infested farm in France where "there are as many carcasses as live ducks" and which is part of the foie gras supply chain that exports the controversial delicacy all over the world. (L214/Real Press)

Massively unsanitary conditions at a duck farm in France have sent shock waves through the foie gras-loving country and prompted a sharp response from authorities.

The disturbing images were released Aug. 20 by animal-rights activists from the organization L214, after a tip-off from a whistleblower. They show a variety of gruesome scenes, including, in the words of L214 co-founder Sebastian Arsac, “as many carcasses as live ducks.”

The farm is part of the foie gras supply chain that exports the controversial delicacy around the world, including to the U.K. and the United States, according to L214. Foie gras is liver of a duck or goose that has been fattened by being force-fed. The latter fact has lead to a variety of places banning its consumption, including Australia, India, and in the U.S., California and, in 2022, New York.

Arsac, who co-founded L214 with Brigitte Gothiere in 2008, told Zenger News the farm in question is located in the Pyrenees Atlantiques department in southwest France and is listed as being part of the Foie Gras du Sud Ouest supply chain.

Zenger News contacted the Foie Gras du Sud Ouest label and spoke to the director, Marc Roose. Asked about the farm with the unsanitary conditions, Roose said, “They are no longer in the IGP, since March 5, 2015. We don’t know why they stopped their membership.”

Arsac, who provided the unsettling images of the farm, told Zenger News that in 15 years of investigations he had “never seen anything like it.”

He said that the animals were in a state of “extreme suffering,” adding: “The corpses of dead ducks rot on the farm, they are never picked up. A thick layer of liquid feces covers the ground and overflows outside the farm. Maggots and rats proliferate, and grime completely covers the dilapidated walls of buildings.”

The footage also shows feces oozing out of the facility and, according to L214, contaminating a local protected stream in the nearby town of Lichos.

L214 has put a petition online demanding the immediate closure of the facility by the authorities and filed official complaints with the French Ministry of Agriculture and the state veterinary services seeking to have the place permanently shut down.

Foie gras is big business in France. The country is both the number one producer and the number one consumer of fois gras in the world – a little over three quarters of total global production of the delicacy is from there – and a large share of that production is exported.

As a result, the country has mainly chosen to mainly ignore international criticism from animal-rights activists. But despite it being legal to produce foie gras in France, the treatment of farm animals there is  subject to strict rules.

Authorities responded promptly to the video, with the French Minister of Agriculture Julien Denormandie posting three messages on Twitter Aug. 19. The first stated that on the morning of Aug. 20, “a veterinarian will be on site to examine the condition of the animals in detail and take the necessary protective measures. The minister has asked the prefecture for a formal notice to be issued against the operation, which may lead to a suspension of activity.”

As for the raising of ducks and geese in France in general, the minister said: “We are increasing the checks to protect animals and take strict measures so that precisely these unacceptable drifts, although isolated and individual, do not discredit an entire profession in which I give my support and my trust.”

Denormandie said visiting authorities will be “extremely vigilant.” He added: “The follow-up to the investigation will be communicated in full transparency.”

Arsac identified the farm’s owner as Christophe Vidal. Zenger News contacted Vidal, who said that while he was the owner of a hatchery at the site, the breeding buildings with the deplorable conditions were run by his neighbor, who he would not identify. “I don’t want to shoot my neighbor in the foot,” he said.