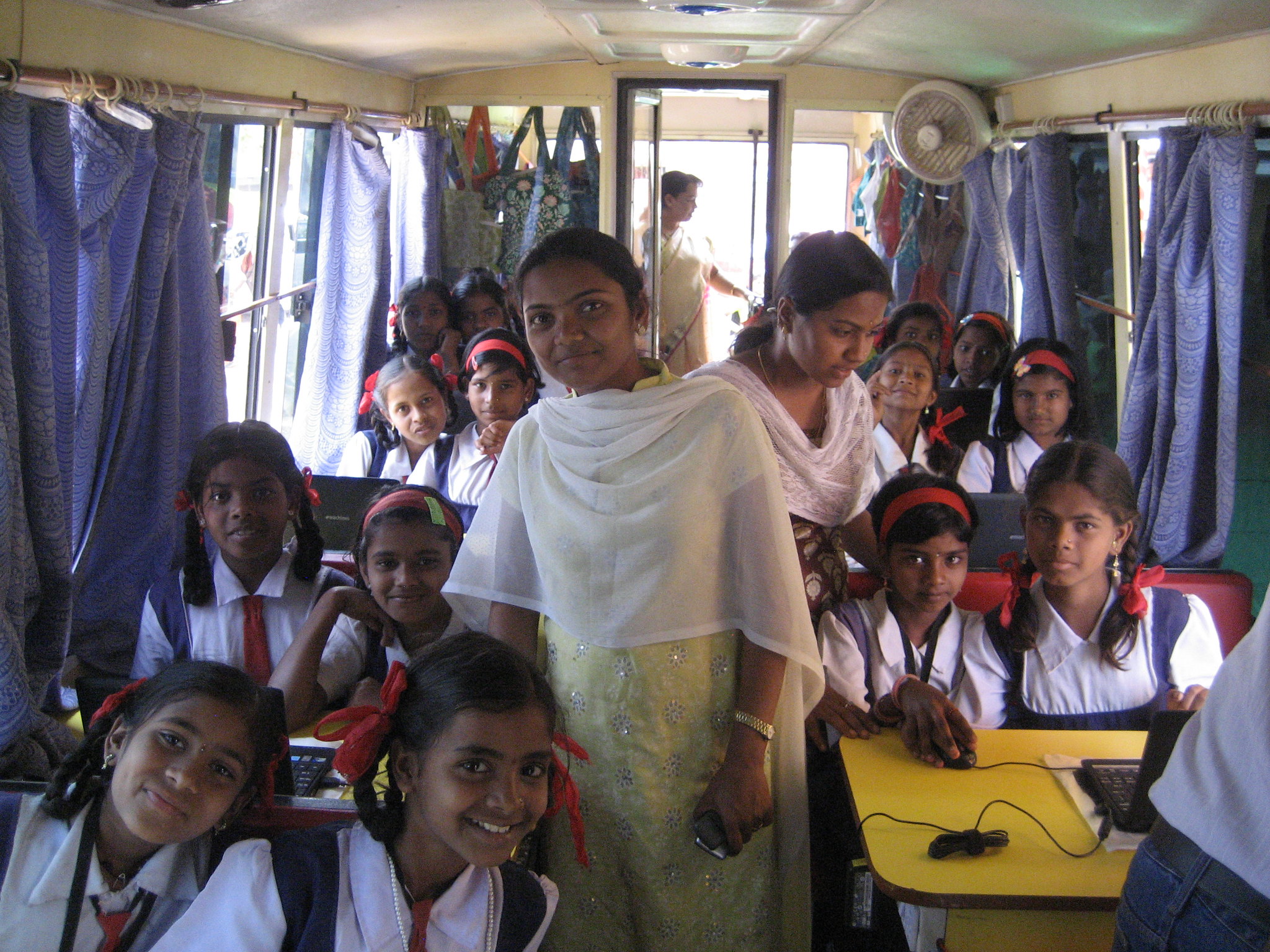 Indian children and their teacher pose on a bus that travels from village to village, teaching computer literacy. (U.S. Treasury Department official photo)

Anirudh Sharma, an alumnus of relatively new private university Lovely Professional University, was 19 years old when he began working on a satellite project. The year was 2017, and he and a small team of friends had been brainstorming about space traffic management—especially space debris, which plagues satellites.

“The present observation of space traffic is limited to ground monitoring through radars,” said Sharma. “The global rush to launch micro-satellites over the last five years necessitated the need for a mechanism for space-based monitoring of space traffic.”

Sharma and his college mate Rahul Rawat started Digantara Research and Technology. Sharma and Rawat’s ideas struck a chord with researchers and innovators in India’s startup capital Bangalore, and the Indian Institute of Science, one of India’s top institutions for scientific research, incubated their project.

The startup is one of few private companies working on a space-based solution for space debris, said Sharma, and is working on expanding realtime space-based surveillance with what he called “a constellation of cost-efficient nanosatellites.”Though India’s startup scene is known for information technology work, ventures into space tech like Digantara are growing. On Aug. 12, startup Skyroot Aerospace became the first private Indian company to test-fire a homegrown upper-stage rocket engine.

To support growth in the industry, the Indian government took several steps to liberalize the space tech market in June and is opening up to the possibilities of doing away with the monopoly of the government-owned Indian Space Research Organization.

“ISRO’s student programs gave a lot of encouragement to students in space technology to look at the sector commercially,” said Sharma. “And now since the government opened the space sector, a lot of Indian space tech companies have got funding. We are planning to raise $1 million from investors.”

In May, the government announced that startups and private firms would be allowed to use the facilities and assets of the ISRO. And, the Indian government wants to establish the Indian National Space Promotion and Authorisation Centre, which would support space technology development and incubation. It would also be the go-to authority for firms looking to test, launch and license space ventures.

The Indian space-tech market is likely to grow quickly over the next five years, said Pawan Kumar Chandana, CEO and CTO of Skyroot Aerospace. “Coupled with the government’s recent announcements, the demand for satellite services in India is likely to fuel this growth.”

But India’s private space tech firms have a long way to go before they can compete with big names. India’s share in the global space market, estimated at more than $350 billion, is less than 2 percent. Compared with global peers raising big money, Indian space startups, many started by recent graduates, are working on shoestring budgets.

“SpaceX and Blue Origin drew an estimated $1.9 billion in combined investment during the year, while low-Earth orbit (LEO) broadband venture OneWeb attracted another $1.25 billion,” according to a report by technology analyst Bryce Space and technology. “Sir Richard Branson’s space tourism startup Virgin Galactic raised more than $682 million in 2019.” Worldwide startups in space ventures pulled in $5.7 billion in financing in 2019, “largely driven by investors continuing to pour large amounts of capital into a handful of the industry’s largest companies,” the report states.India’s competitors in Asia are advanced economies like Japan, China, South Korea and Taiwan. But the Indian Space Research Organization itself is proof budgets aren’t always the sole determinant of success. The annual budget for India’s Department of Space for 2019-2020 is around $1.67 Billion (Rs 12,473.26 crore). In comparison, NASA’s annual budget for the fiscal year is more than $21 billion. But the Indian organization carries out regular satellite launches and Mars and Moon missions, including the successful 2014 Mangalyaan Mars Orbiter Mission, which cost $74 million — less than the $108 million budget of the Hollywood movie “The Martian.”

Despite political upheavals and dramatic changes in the government and its policies, space tech has been supported across parties, and the ISRO has run unaffected by changes in New Delhi.The organization began running student satellite programs as early as 2009 and in 2016, it launched a consignment of 20 satellites, including two developed by students — Swayam, developed by students of College of Engineering at Pune, and Sathyabamasat, built by Sathyabama University students. Many private universities have fostered breeding grounds for space tech startups.Dhruva Space, one of about 10 space-tech startups in the country, became the first private company in India to manufacture satellites, in 2012. And Mumbai-based Exseed Space became the first private commercial organization in the country to launch a satellite to space in December 2018, via the Elon Musk-led SpaceX — that too at a cost of about $1.3 million. Pixxel, a space technology company started in 2019 by students of Birla Institute of Technology and Science at Pilani, a top engineering college in northwestern India, is working on launching a constellation of 30 satellites by mid-2023. The satellites will provide images of Earth to subscribers every 24 hours. The first launch is scheduled for November.

But not all companies see the government’s efforts to liberalize the sector and streamline the regulatory hurdles with the new agency as enough yet. Pixxel, for example, will launch its satellites from Russia instead of India to avoid the 18 percent goods and services tax to launch on ISRO’s rocket.

The tax was one major factor in choosing Russia over India, said Awais Ahmed, Pixxel’s founder and CEO. “And secondly, in India, we needed to wait for four months before getting a clearance to launch from ISRO. There is not much clarity about space tech laws in India, although it is likely to change over the next few months with IN-SPACe.”

But the company is optimistic: It recently raised $5 million through Indian venture capital firms Lightspeed India Partners, Blume Ventures and growX ventures, adding to the $700,000 it raised last year. Ahmed said 85 percent of the components will be made in India.