By Jupiter! Scientists Baffled by Ancient Statue of Roman Gods in Well

Archaelogy experts say angry Christians may have ditched them. 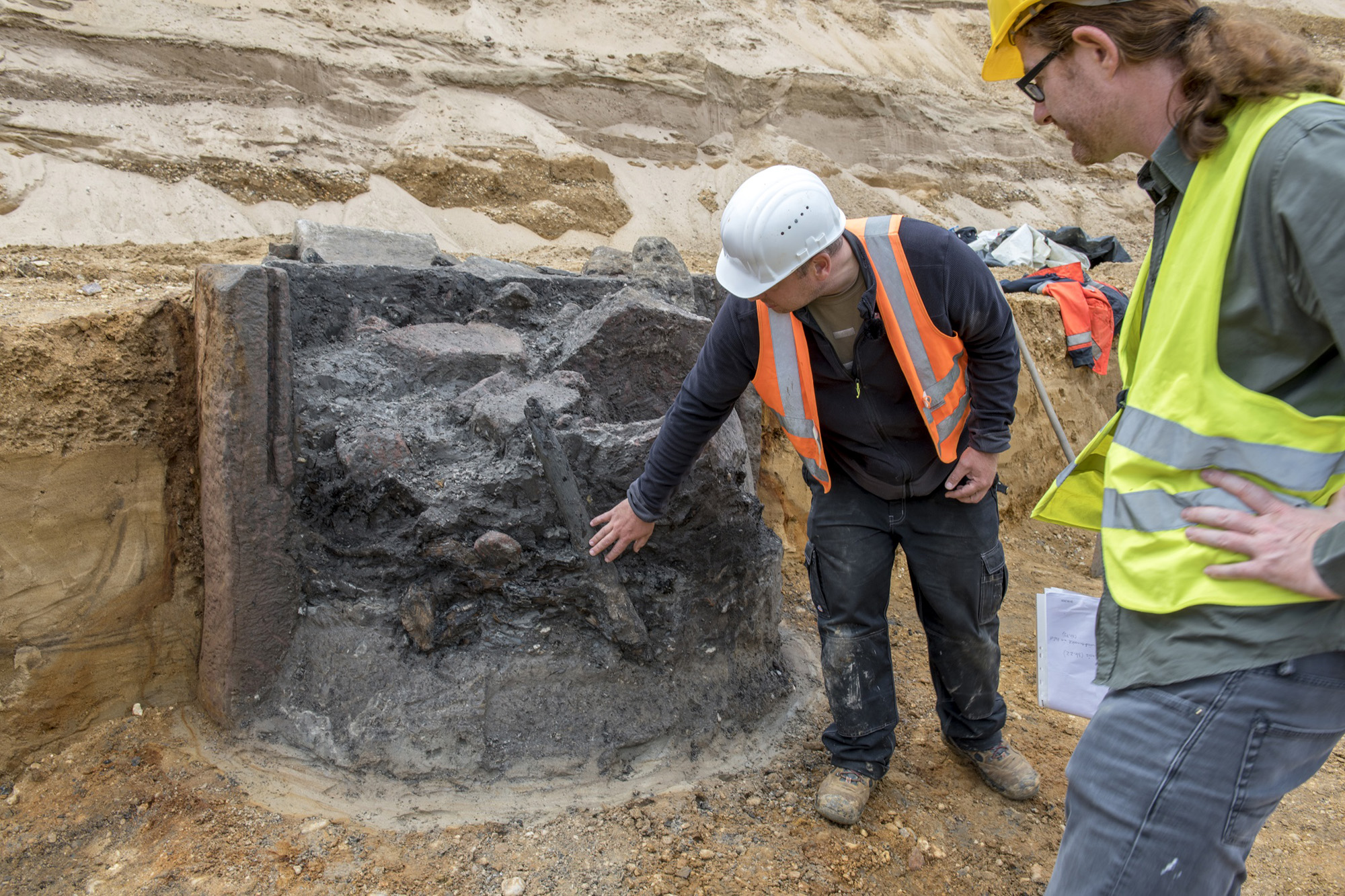 An ancient column that could date back as far as the 5th century has been unearthed in Germany.

The column, bearing images of the Roman god Jupiter and three other deities, is believed to have been deposited in a well at the site of what is now a commercial lignite mine.

Archaeologists recently made the discovery in the town of Kerpen, some 12 miles (20 kilometers) outside Cologne. The column dedicated to Jupiter was broken, with the experts saying it might have been damaged after being thrown down the well sometime between the 2nd and 5th centuries, possibly by Christians seeking to destroy remnants of the pagan gods.

The badly damaged image at the foot of the column, believed to have once been more than 16 feet (5 meters) tall, is believed to be a depiction of Jupiter himself. The three other images are better preserved and show three female goddesses: Juno, the wife of Jupiter; Minerva, the goddess of wisdom; and very likely Nemesis-Diana, the goddess of just vengeance, according to the archaeologists.

THE ROLE OF ROMAN MYTHS

The three deities — Jupiter, Juno and Minerva — are the so-called Capitoline Triad, the main deities of the city Rome who are often depicted together. “The portrayal of Nemesis-Diana is more unusual,” Schubert said. “There’s only one other piece of evidence [like it] in the Rhineland and only a few in the whole Roman Empire. The goddess of the lawful revenge Nemesis is depicted with signs of the goddess of the hunt Diana, which makes this portrayal even more special. We don’t know why she was chosen to be depicted with the three main deities of the Roman mythology.”

A statement issued by the head of the preservation office Erich Classen also said the representation of Nemesis-Diana is unusual in the area. “We have little evidence that she was worshiped in the Rhineland during Roman times,” Classen said. The statement also says that the goddess can be recognized by means of a wagon wheel behind her and the short robe she wears.

“We cannot exactly tell where the columns stood originally but it’s most likely that they stood in the periphery of the wells that belonged to Roman farms or manors,” said Schubert.

The well containing the column has some other unusual attributes. Excavation manager Martin Gruenewald, from the Titz branch of the preservation office, says the well appears to have been used from the 2nd century until the 5th century A.D.

“Using the well for such a long time is extraordinary,” he said. “The wells discovered so far were normally filled with Jupiter columns as early as the 3rd or 4th centuries. The well itself is revealing. The solid stone frame of the well reveals a high structural and logistical effort.”

This could also provide information about the religious conditions in the Rhineland during the late Roman period. Remains of Jupiter columns were found in many wells on the Roman estates, where they were probably located in courtyards.

“During the period of Christianization, these pillars of the gods were considered pagan and were perhaps deliberately thrown into the wells. The fact that in the case of Kerpen this only happened in the 5th century shows the worship of the Roman deities still taking place in the country at that time, after churches had long since been built in Cologne and elsewhere,” said Gruenwald. “However, it cannot be ruled out that the column was destroyed during an incursion by Germanic tribes and ended up in the well, because from the 3rd century tribal groups invaded the Roman area to the west of the Rhine.”

“The sandstones [used to make the columns], which weighed several tons, had to be transported several kilometers from the northern [low mountain range of] Eifel to the villa,” said Udo Geilenbruegge, head of the Titz branch of the preservation office. “Only a wealthy landlord could have afforded that.”

It’s unclear exactly how old the recently discovered column is. “It was most likely built at the same time as the well, whose construction indicates the establishment of the associated villa rustica,” said Schubert. “But the column could also have been built later as the well; we can’t be certain about this.

“The well itself gives us more clues regarding the age determination. … The time of the construction … is more uncertain on the basis of the finds, but is probably identical to other wells of the same building technique in the region that date to the 2nd and 3rd century. We have to wait until the dating of the wood findings that we have retrieved from the well [to] be done, but that’ll take some time.”

In about 350 A.D., legislation by the Roman Empire made so-called pagan worship an offence punishable with death, which resulted in temples bearing ancient Roman gods to be destroyed or closed. In 380 A.D., Emperor Theodosius issued the Edict of Thessalonica, which made Christianity the official religion of the Roman Empire, with pagan belief systems and practices gradually destroyed or incorporated into the new religion.