THE WAY WE LIVE NOW: The farm in the Heart of the City 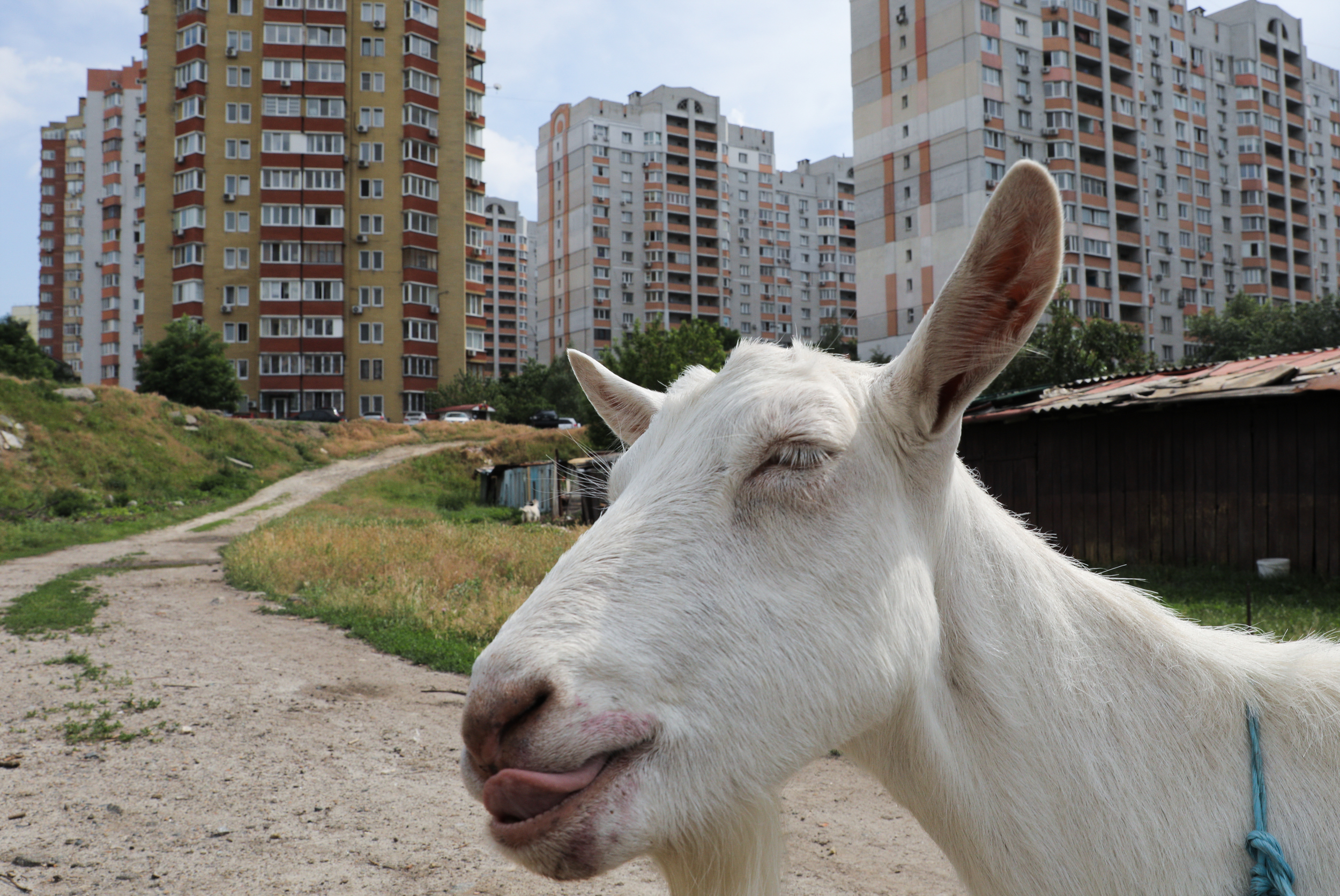 A goat stands in "the pit" in Kyiv, Ukraine. (Sergii Kharchenko/Zenger)

This residential area in Kyiv, Ukraine’s capital, surrounded by skyscrapers, looks like it could be anywhere around the globe.

But nearly invisible among the dozens of tall high-rises is a group of one-story houses. But everyone who lives in the area knows the local landmark: “the pit.”

The pit has been around at least since the late 1980s, when a residential area was built on the left bank of the Dnipro, where the village of Pozniaky once was. The small and cozy habitat for a hundred peasants was turned into a home for thousands of town dwellers.

But Natalia Yurchenko did not want to leave her private home, built by her grandfather, for an apartment. She wanted to live closer to the soil and refused to relocate, intent on preserving her lifestyle.

Ever since, a flock of her goats has roamed the yards of the tall apartment blocks entertaining the local children. Her roosters wake the managers and bankers to head to work every morning and the pigs grunt loudly, demanding their food.
Ten people live in her village-style household on 1.5 acres in the middle of the city: her husband, her children and their families, and a family of refugees from the war-torn Luhansk region in Eastern Ukraine.

In Kiev, as with many towns and cities, thousands of offices are closed and tens of thousands of people work remotely. Many people leave city life to avoid Covid-19 and buy or rent long-term housing in the villages.

But the coronavirus and quarantine helped win the affection of Yurchenko’s neighbors. Some of them, she is sure, hated her and her farmstead. Her goats, which roam freely in search of food, can annoy and disturb her neighbors.

Now people who are stuck in the city come to Yurchenko with their families to look at and play with her animals—like a trip to the zoo, but without paying an entrance fee.

With no free access to shops and, by extension, fresh food supplies, many Ukrainians have started planting vegetables and breeding animals. But Yurchenko has farmed for years without leaving the city.

After African swine fever killed all 20 of her pigs a year ago, she started breeding rabbits and already has 15 of them living in her homemade cages, fashioned from scraps.

Yurchenko grows tomatoes and cucumber seedlings seasonally, selling them to farm-holders, and Irish moss for interior design. The only year-round profit she can get is from her 100 chickens, which lay eggs, and her 10 goats that give milk.

The old sheep is the only animal at the farm with a name. It does not give milk, and nobody shears it for wool. Yurchenko can’t remember where she got the animal from, but “Bubble” is part of the farm in the heart of the city.