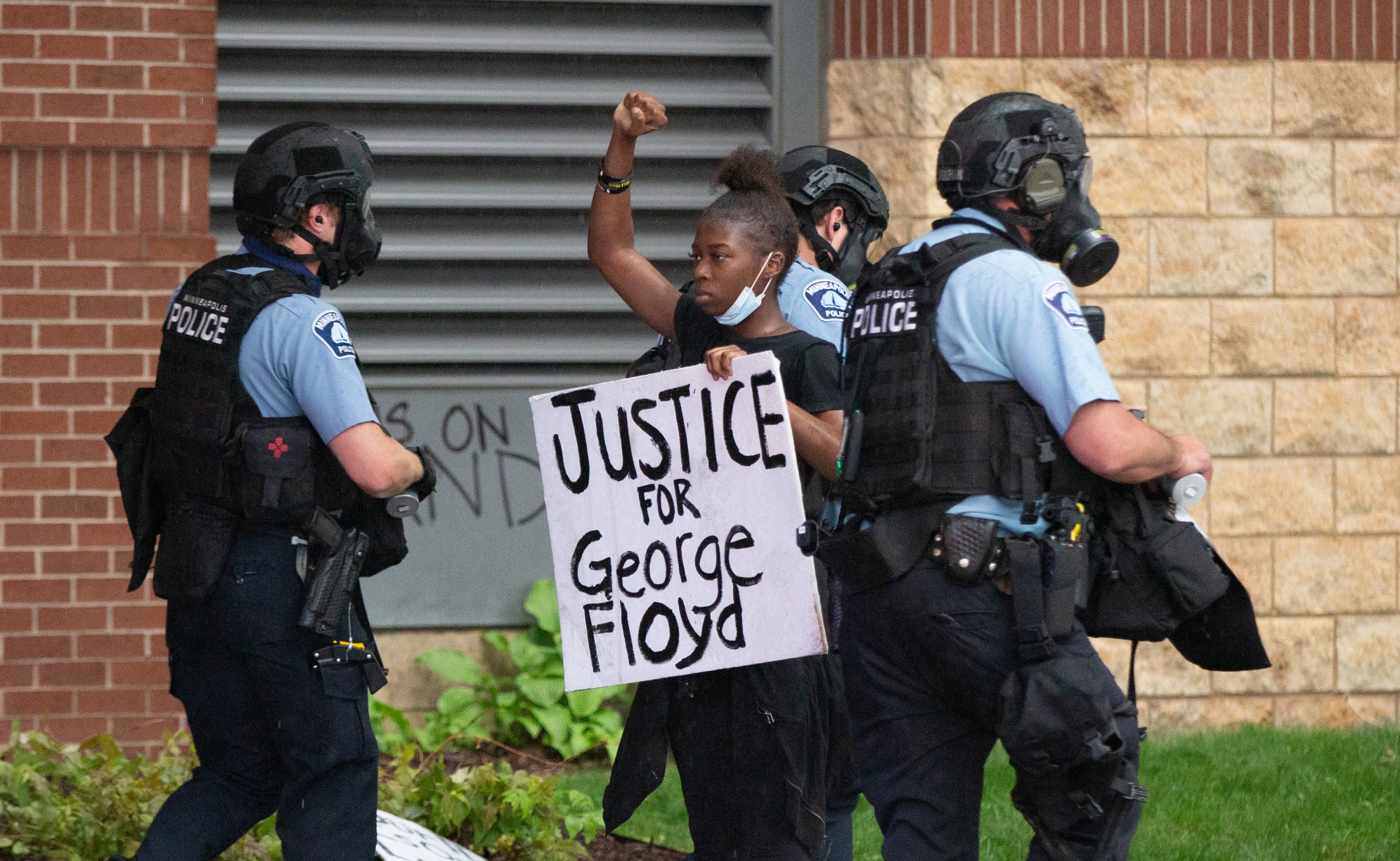 Maerkeanna stands still with her fist in the air as polcie walk by her as she protested the police killing of Geroge Floyd in Minneapolis on May 26, 2020. (Chris Juhn/Zenger)

Black Lives Matter, they say. His life mattered, they say, until a police officer decided it didn’t. They say.

Minneapolis is the latest U.S. city whose threads are fraying and burning over race relations. Protesters see video footage of George Floyd, accused of forging a check, his neck trapped under police officer Derek Chauvin’s knee, pleading for his life as he labored to breathe. Breathing his last.

Thousands hit the streets—peaceful at first, even polite. A makeshift memorial attracted balloons and roses. The police chief fired four cops and the mayor demanded criminal prosecutions, but justice is a slow drip and Molotov cocktails create loud, roaring fires.

“Good cops are dead cops,” one vandal spray-painted not far from where paramedics found Floyd unconscious.

It wasn’t the first time a white cop killed a black suspect, and it won’t be the last.

This is how black Americans caught in the middle live now. Worrying and working to protect their spouses, their children, their neighbors’ children. And furious that they have to.

The name Trayvon Martin launched a protest movement seven years ago, and more names would follow.

Those are just a few whose deaths fit neatly enough into quiet weeks or weekends to become news. There are more.

Arson doesn’t always follow, nor looters urging city-dwellers to “be the virus.” More shootings aren’t guaranteed amid chaos, nor innovative ways of cracking open ATMs to harvest what’s inside.

Two wrongs don’t make a right. But the color of a man’s skin shouldn’t matter either, they say.

About 1 in 1,000 black men and boys in America can expect to be killed by someone wearing a badge, according to Northwestern University research.

White men have it decidedly better. As usual, they say. And not just in Minneapolis.

It’s the same in New York and Cleveland and Charleston and Baltimore and Baton Rouge and Sacramento and Dallas and Kansas City and Tulsa and Chicago and in Ferguson, Missouri.

Our TV sets, mobile phones and car radios tell us, often, that something is wrong. Red-orange flames say some of us are angry beyond words.

Some. But we’re all here. We all hear. And then we don’t again.

Enraged and tired and numb is the way we live now.