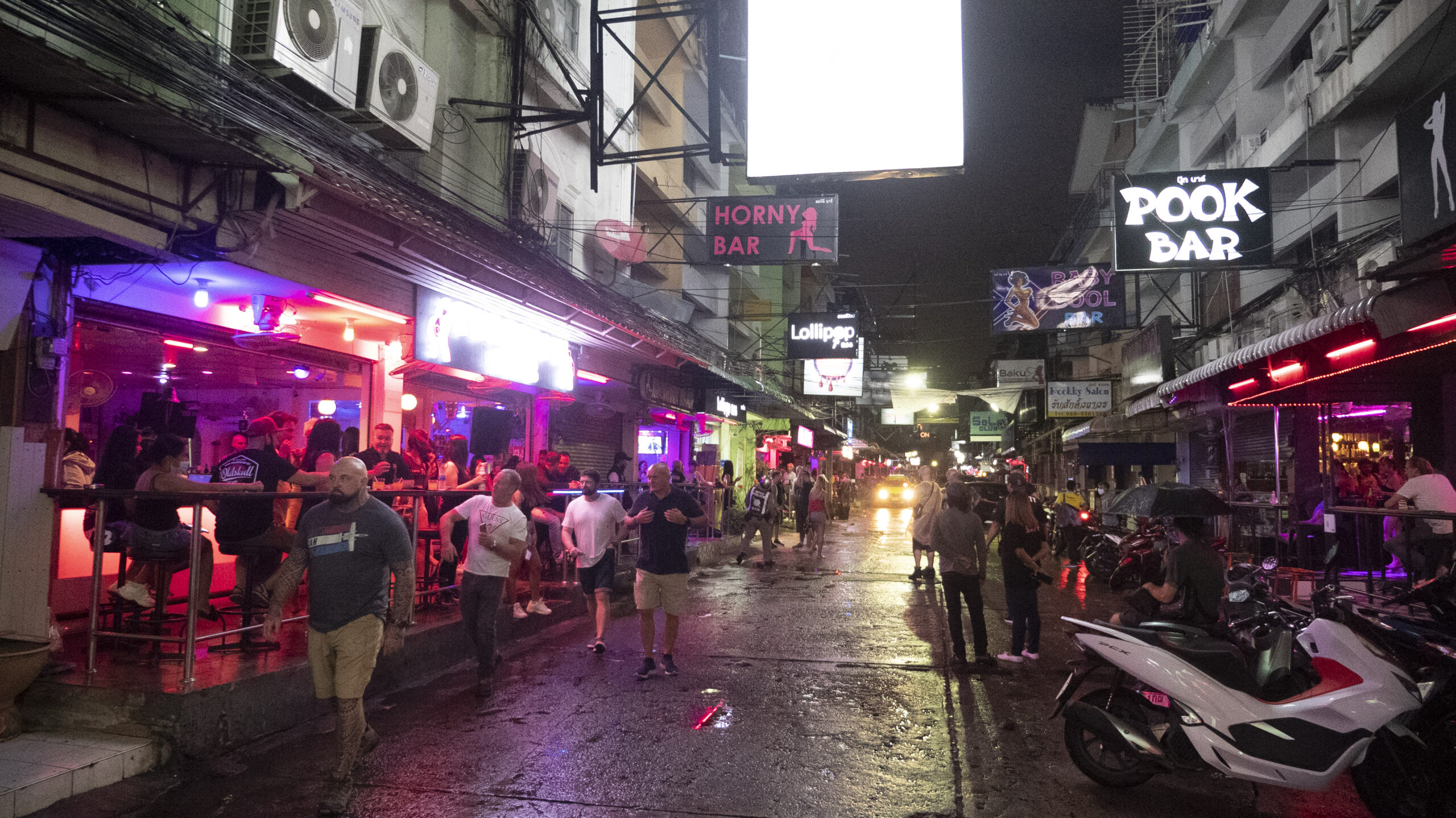 People enjoy drinks at bars and clubs that just opened during the 5th phase of easing after being closed for many months during the coronavirus lockdown on Soi 6 in Pattaya, Thailand. No new cases inside Thailand have been reported in more than 30 days. (Stephen J Boitano/Zenger)

Tourists in Thailand who tire of pristine white sand beaches and ancient Buddhist temples can find a loosely policed sex trade waiting for them.

The nation’s booming international tourism industry includes a famous Red Light District, despite a 1960 law that made prostitution illegal. Police mostly keep the peace and crack down on human trafficking. They’re also on the lookout for child prostitutes.

The sex trade has been documented in Thailand going all the way back to the middle of the 14th century, when brothels were legal—and taxed.

The industry boomed during the Vietnam War when American soldiers would travel to Thailand during their time off. Soldiers frequented go-go bars, which remain popular in the Red Light District today.

Some areas of the district mainly cater to Thai men. Others tend to foreign tourists’ carnal interests. One region, known as Soi Twilight, is known for its LGBTQ-friendly bars.

Hotels abound, from luxury lodging to by-the-hour flop-houses. Live shows and music are part of the scene, and so is a ready flow of alcohol. Bars and clubs in the district are safe for tourists, but smart ones are cautious of attempts to swindle them out of more and more money.

Honest or not, many of the Red Light District women have come to Bangkok from rural areas, drawn by the lure of earning three or more times Thailand’s minimum wage. Some have families who depend on the crumpled and whiskey-soaked Baht, the national currency, that they bring home every night.

The Covid-19 pandemic hit them hard. With foreigners barred at the border and businesses shuttered everywhere, work dried up. They get nothing from government payments to the unemployed since their work is technically illegal.

For awhile, everything was empty. Hotels, beaches, bars, karaoke parlors—and the brothels.

They were closed for months. Only in the government’s fifth round of “easing” restrictions were they allowed to light their familiar lamps again. Thailand hasn’t seen a new Covid-19 case diagnosed in more than 30 days.

So the brothels, the bars and their streets have all filled up again but now condoms aren’t the only protective barrier many Red Light District prostitutes bring to work. Many wear masks, at least when they can. A few sport gloves.