The Communist icon survives because it’s on private land. 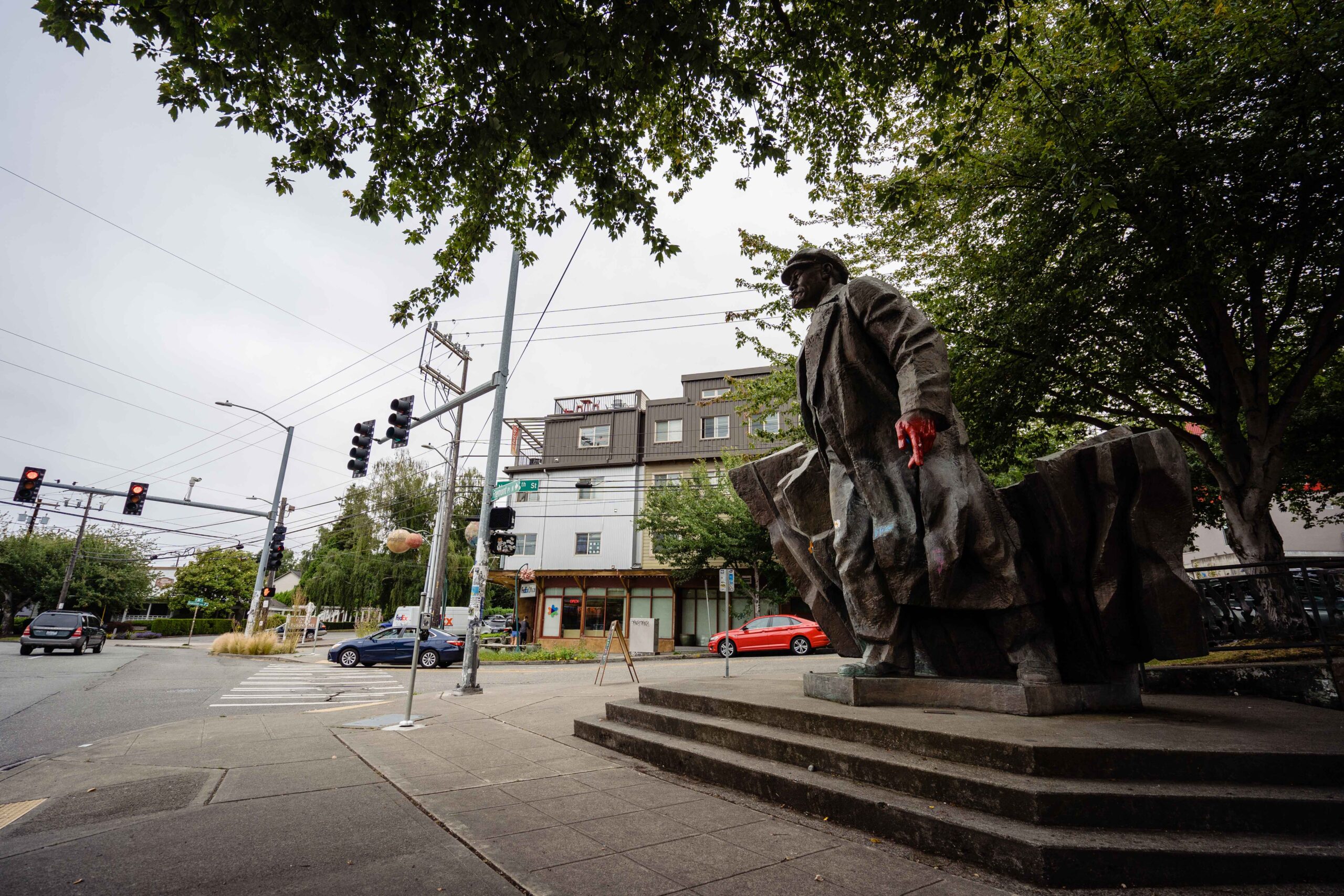 The statue of Vladmir Lenin in Seattle. (Cory Parris/Zenger)

Seattle’s Fremont neighborhood is home to an assortment of eccentric sculptures, including one 16-foot statue of a founding father of the Soviet Union.

The statue of communist revolutionary Vladimir Illyich Lenin is both venerated and loathed. It was toppled once, decades ago during the collapse of the Soviet Union, and a vocal contingent would like to see the statue come down in Seattle.

A Facebook group called “Seattle, Tear Down this Vladimir Lenin statue!” seeks the statue’s removal, as does a change.org petition that states there “should not be a statue of the man that led the Russian revolution of 1917 bringing communism to Russia on American soil. Many people find this offensive and no reason why this should stand while many other statues of American figures are being defaced or torn down.”

“Every time in recent years a Confederate statue gets taken down, there’s always calls to do the same to the Lenin statue. I know because I’m the one who hears them,” said Caroline Sherman, office manager and self-proclaimed “membership services guru” for the Fremont Chamber of Commerce, which has held the statue in trust since 1995.

However, unlike many of the Confederate statues targeted by protesters this summer, which are typically public monuments on public land, the Lenin statue is privately owned — and has been ever since its arrival in Seattle.

“It’s not up to the city or the chamber whether it leaves or stays,” said Sherman. “It’s a privately-owned object on private land.”

Leonard Garfield, executive director of the Museum of History and Industry in Seattle, provided a history of the statue: “Created in 1988 by Slovakian sculptor Emil Venkov as part of an arts competition, the piece was toppled during the 1989 Revolution. Issaquah entrepreneur Lew Carpenter discovered it while visiting Poprad, Slovakia, and was so taken with the seven-ton sculpture that he decided he wanted to buy it from the city.”

Carpenter, an English teacher, paid $53,000 to purchase and ship the piece, hoping to preserve it for its historic and artistic merit.

“But just one year after successfully transporting it to Issaquah, at the age of 45, he died in a two-car accident on Stevens Pass,” Garfield said.

The statue was moved several times before landing in 1996 in its current home, near the intersection of Fremont Place North and North 36th Street.

The Fremont statue has always been on the market and remains for sale.

The statue is one of several public art displays in Fremont, flanked in neighboring blocks by a troll lurking under the Aurora Bridge, Richard Beyers’ “Waiting for the Interurban” and the Fremont Rocket.

The Lenin statue gets decorated for holidays — adorned with a red star during the Christmas season and dressed in drag during gay rights celebration Pride.

Calls for the statue’s removal have echoed for years, even reaching the State Capitol, where, in February 2019, a group of Republicans in the state’s Congress introduced House Bill 2120 seeking to create “a work group to study and make recommendations on a statue to replace the Vladimir Lenin statue.”

The bill, citing atrocities committed under the auspices of the Soviet government, including the “Red Terror of 1917-1922” and the deportation and genocide of Crimean Chechens and Tatars, reached the Committee on State Government and Tribal Relations but went no further.

“Seattleites have expressed concerns and frustration over symbols of hate, racism and violence that exist in our city. Not only do these kinds of symbols represent historic injustices, their existence causes pain among those who themselves or whose family members have been impacted by these atrocities. We should remove all these symbols, no matter what political affiliation may have been assigned to them in the decades since they were erected. This includes both confederate memorials and statues idolizing the founder of the authoritarian Soviet regime.”

The remarks were spurred by the events surrounding “the deadly violence in Charlottesville and impromptu protests around the statue,” Garfield said.

But Fran Dodson, who was married to Lewis Carpenter, has said people misunderstand the artist’s intent: “I think he’d say they’ve got it wrong. That maybe their intentions are good, but they’re seeing it in the same terms of the Confederate statues, which are used to oppress people. There’s no comparison. It is apples and oranges.”

The statue, Dodson has said, was created as a “silent protest against communism because it was oppressive,” showing Lenin’s aggressive stance, a contrast to other statues depicting the dictator as benevolent.

Still, calls persist for removal of the statue, which Sherman said often is a target of graffiti and vandalism.

“Its left hand has been painted red so many times that it’s more-or-less permanent. They can’t remove the paint without possibly damaging that part of the statue,” Sherman said.

Other statues have been toppled with the use of chains and vehicles or sheer people-power. A United Confederate Veterans Memorial in Seattle’s Capitol Hill cemetery, built in 1926, came down earlier this month.

Perhaps the Lenin statue fails to trigger the same ire. “I’ve had people calling and asking if they could hook a chain up to the (statue) and their truck and tear it down,” said Sherman. “But, to my knowledge, no one’s ever seriously attempted it.”

Meanwhile, as of July 29, the change.org petition had 241 of the 500 sought-after signatures, and a recent protest at the statue drew one man with a sign.

“There’s a plaque next to it that explains the history of the piece and that its purpose is to serve as a reminder of an important historical period,” Garfield wrote in an email about the statue. “But questions remain about when historical figures should (and should not) be immortalized through public art.”

Garfield said the statue is not necessarily a celebration of Lenin, or its purpose is ambiguous at best.

“Although the plaque on the property states that the monument is meant to be a reminder of an historic era, the statue evokes strong reactions,” he said. “For some, it is seen as a kind of ironic statement, an irreverent nod to the fact that those celebrated by some as heroes can just as accurately be seen as evil by others, and that placing anyone on a pedestal can be an exercise in historical delusion or simple propaganda. Others object strongly to a monument that could be seen as a tribute to Lenin, and therefore offers tacit acceptance of the dire human toll of communism and particularly of Stalinist Russia.”

“People tell me that the statue shouldn’t just be removed, but destroyed. They cite the fact Lenin was a terrible person,” said Sherman. “But it’s not up to us.”