THE WAY WE LIVE NOW: Bali Tourism Shrinks to Zero in Pandemic Crisis 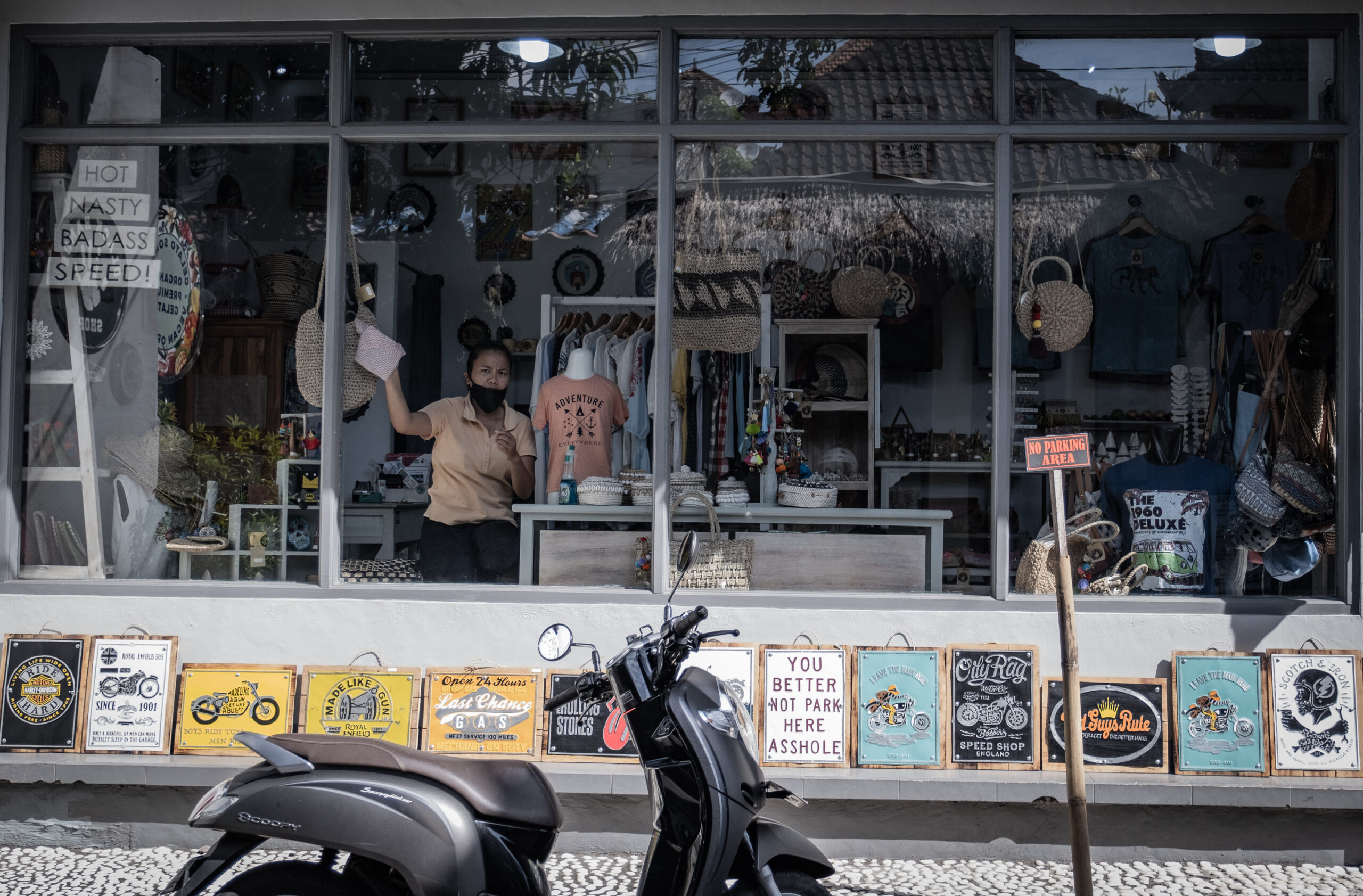 A woman cleans glass at a shop in Ubud, Bali Indonesia, 24 June 2020. Tourism makes up as much as 80 percent of Bali's economy has hit hardly during the COVID-19 pandemic. According the data from Central Bank of Indonesia, Bali's economy in Q1 minus 1,14 percent and Q2 minus 9.5 percent. Central Statistic Agency said that the foreign tourist arrivals dropped 87.44 percent year-on-year (yoy) in April 2020 to a record low level as the COVID-19 pandemic hits the globe. (Agung Parameswara/Zenger)

More than 6.3 million visitors flocked to the 70-mile-long, 95-mile-wide Indonesian island in 2019, drawn to its Hindu temples and rich culture, volcanoes and rice terraces, cliffs and sandy beaches on the Indian Ocean. Many come from China, Australia and other countries to the island’s more than 1,000 hotels, which, like others in Indonesia, have been temporarily closed by the coronavirus.

But after the pandemic hit, popular tourism spots like the beaches of Kuta, Seminyak and Nusa Dua and the temples and shrines near Ubud stand nearly empty. In Canggu, a few foreigners still enjoy the waves and sun on the black sand Batubolong Beach, though many were waiting for the airport to reopen so they could go home.

A mere 36 foreign tourists visited Bali in May, according to the most recent statistics available from the Bali Provincial Statistics agency, down 90% from the 327 in April — but in April 2019, the island saw 476,160 foreign tourists. On any given day in May, only 2% of Bali’s hotel rooms were occupied, down from nearly 52% in May 2019. There are more than 1,000 hotels on the island, according to the

As much as 80% of Bali’s economy is linked to tourism. But as the flow of foreigners to Indonesia dropped to near-zero in April, Bali’s economy contracted: by 1.14% year over year for the first quarter, and by 7.7% from the previous quarter, according to data from Bali Provincial Statistics Agency. The island’s tourism took hits in 2002 and 2005 because of terrorism-related bombings and again in 2017 after the Mount Agung volcanic eruptions.

The global pandemic has affected nearly 11,000 tourism-related businesses throughout Indonesia, according to the country’s Ministry of Tourism and Creative Economy. And of the country’s estimated 268 million residents, nearly 81,668 have been confirmed to have coronavirus, according to data compiled by Johns Hopkins University, and 3,873 have died.

After the massive effect in tourism caused by COVID-19 pademic, which many say is worse than the downturn after the 2002 and 2005 Bali bombings and the 2017 Mount Agung volcanic eruptions, it’s time to thinking that developing other sectors of the economy, such as agricultural, as a government priority.