Sows About it? Pig Superstud ‘Ole’ is a Breeder Apart 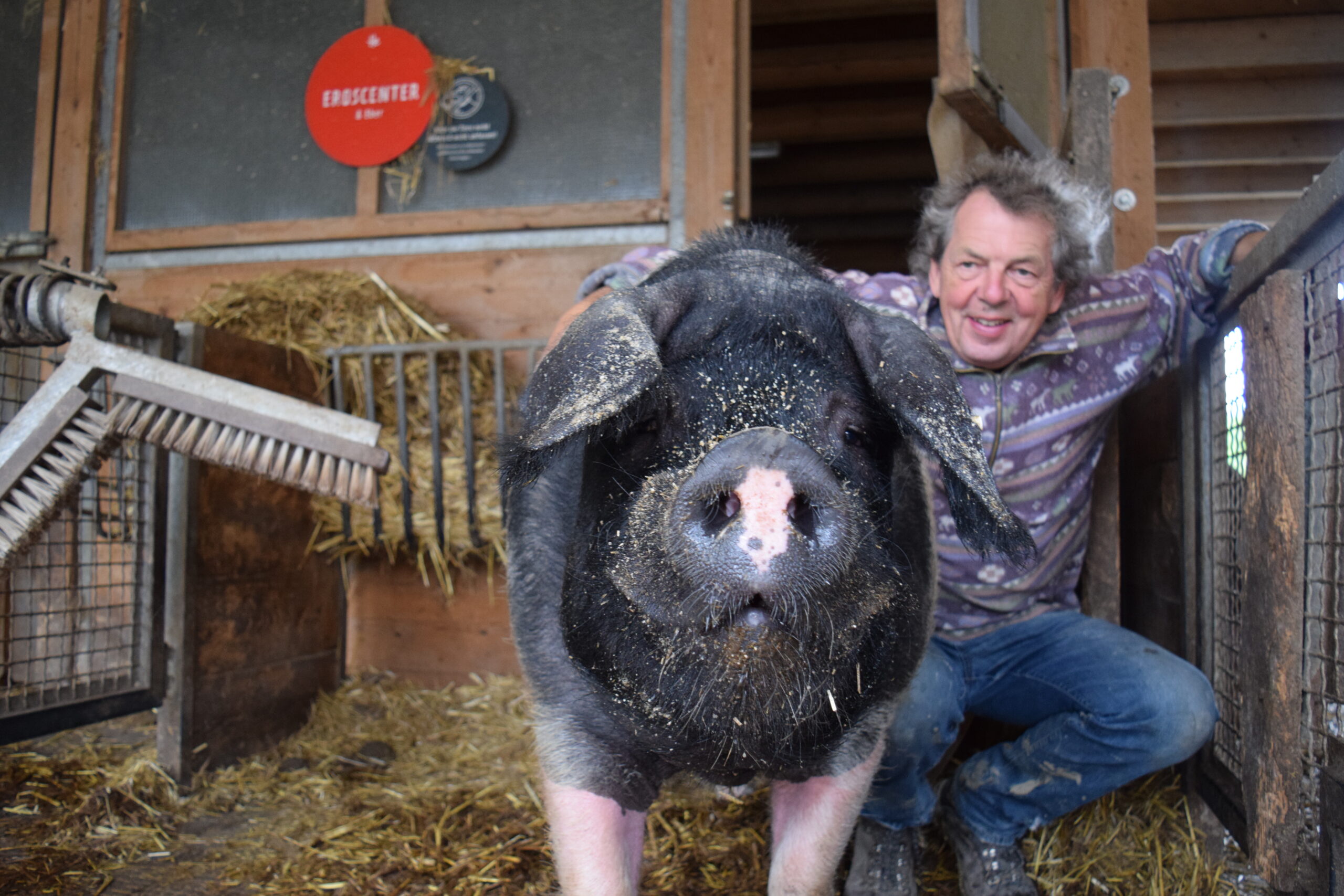 The fine specimen of a purebred Swabian-Hall stud pig works at his farm’s “Eros Center” breeding area, helping to preserve his old, robust pig breed, which almost died out about 40 years ago. And, his manure helps keep the farm in electricity, heat and fertilizer.

He lives near Munich in Germany, at Herrmannsdorfer Landwerkstätten (Herrmannsdorf Country Workshops), an organic farm that has pigs, chickens, grain fields, pastureland and forests. There is also a cheese dairy, a bakery, a brewery, two slaughterhouses, a butchery, a restaurant and a farmer’s market.

Ole, the sole Swabian-Hall of the three stud pigs on the farm, is two and a half years old, has good legs, a strong back and a stud career of eight, 12 or more years ahead of him. He will pass on his peaceful temperament: good for future generations of stress-resistant porkers and future mother sows with sound maternal instincts.

“That peacefulness is particularly important if sows have freedom of movement when they give birth,” owner Karl Schweisfurth said. Sows at Herrmannsdorf have large stalls and are not held tightly between the metal bars of a “farrowing crate,” a widely used but controversial apparatus that prevents mother pigs from accidentally crushing their babies.

Overall, sows in Germany are almost always artificially inseminated, according to Germany’s Federal Ministry for Food and Agriculture website. At Herrmannsdorf, 50% of the piglets are conceived that way too.

“But we of course want things to be natural here,” Schweisfurth said. “We want to let Ole and the sows have some fun.” If conception doesn’t occur when the pigs mate naturally, sows are also inseminated artificially with Pietrain semen.

Ole gets it done, though. He still appreciates the sex appeal in the shapely hams of a real sow, something many boars can’t do anymore. In the past, Schweisfurth tested Pietrain-breed stud pigs that came from artificial insemination stations where males mount only semen-collecting dummies. A living female? “They seemed to ask, ‘What’s that thing?’” Schweisfurth said.

Ole is part of a sustainable cycle at the farm that starts with taking from the soil, then giving back to it. He eats the farm’s grains, legumes, and a clover-grass mixture that is also planted as a nitrogen-fixer to enrich the soil. He and his kin drink whey left over from the cheese-making process at the dairy. His children who are fattened for slaughter also make good use of the bakery’s unsold bread and the brewery’s unfermented mash.

Today, Swabian-Hall pigs like Ole are raised in significant numbers only around Schwäbisch Hall (northeast of Stuttgart) and at Ole’s farm. “What we do here is a good example of how we can keep breeds from going extinct by raising them to eat them,” Schweisfurth said.

Because of its high proportion of body fat, the Swabian-Hall breed can live outdoors for much of its life and stay healthy without routine doses of antibiotics. Still, the fat can be too much of a good thing in the eyes of modern consumers. For that reason, Ole’s breed almost died out. By the mid-1980s, very few Swabian-Hall pigs were left.

Ole’s purebred sons provide plenty of fat for the Herrmannsdorf butchery. It’s used in salamis, sausages, and patés. It is also sold for cooking or as a delicacy in its own right.

When Ole’s purebred Swabian-Hall daughters are bred with Ole’s stud pig colleague Hugo, who is of the more meaty Pietrain breed, the meat of the resulting animals is marbled with veins of tasty fat throughout—a mark of quality.

Ole and company create energy for the farm too. Their excrement is heated in a biodigester connected to a block heat and power plant that creates electricity. Warmth from the plant’s machinery heats the butchery and other food workshops. The substrate residues of the process, now methane-free, are then spread on the grain fields that provide for the Herrmannsdorf bakery and for the pigs’ future meals.

Uniting agriculture, artisanal food processing and direct marketing of food under one management Herrmannsdorfer Landwerkstätten is an unusual but successful business model.

In the farm shop and in their eight shops in Munich, Ole’s owners sell fresh food from the farm’s workshops but also offer vegan foods made by other companies. Still, they believe you need animals to feed the world and that animals must be part of any organic farm. Manure makes plants grow. If you keep and kill animals, first grant them a good life. Respect the natural needs of their species. When you slaughter them, cause no stress or pain.

Karl Schweisfurth’s father, the late Karl Ludwig Schweisfurth, founded Herrmannsdorfer Landwerkstätten and started pioneering work in organic pig farming after selling his cold cuts-producing empire, Herta, to Nestlé in 1984. Schweisfurth Senior became disgusted with industrial livestock farming after seeing the bewildered eyes of pigs in his factory farms. “What are you doing to us?” they seemed to ask him, he reportedly often said.

Karl Schweisfurth, like his father, is sensitive to the look in pigs’ eyes. In Ole’s he has often seen orgasmic abandon. “Ole definitely has pleasure,” he said. “And I think the sows do too.”