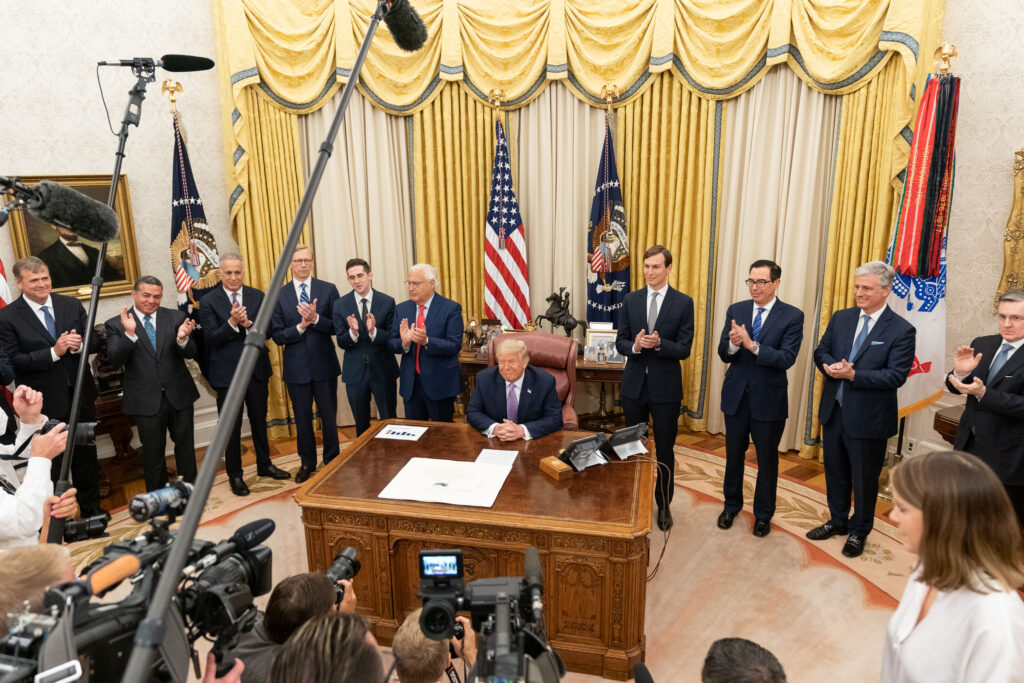 President Donald Trump, flanked by aides and a delgation from the United Arab Emirates and Israel, celebrate the signing of an agreement in which the UAE recognized Israel. (White House photo)

The announcement of the third peace treaty between Israel and an Arab state came as a complete surprise to the international community Thursday. No dialogue leaked, no statements floated to the press ahead of time, no countermeasures deployed to interfere, and no traditional diplomacy—only President Donald Trump’s blackjack-like brinksmanship and his son-in-law Jared Kushner’s calm.

But the sound of throats clearing Friday in Abu Dhabi was followed by cautious gloating, and efforts to point out how the Israelis will no longer be “annexing” the West Bank.

“The UAE has long been a champion of the Palestinian cause, their dignity and right to self-determination and peaceful coexistence,” said Hend Al Otaiba, the director of strategic communications at the United Arab Emirates Ministry of Foreign Affairs. “We cannot act on behalf of the Palestinians or the Israelis, but we hope this agreement gives them space and support in which to negotiate a lasting peace treaty that will secure broader regional peace and stability.”

“We believed the two-state solution was existentially threatened by annexation and we had an opportunity to put a stop to it,” she told Zenger News.

Israeli Prime Minister Benjamin Netanyahu pointed out in a Jerusalem address after a signing ceremony that the text of the agreement called for Israel to “suspend” its annexation, not cancel its plans.

“There is no change to my plan to extend sovereignty, our sovereignty in Judea and Samaria,” Netanyahu said, referring to the West Bank by its Biblical names,” in full coordination with the United States.”

Otaiba said her government made the right deal even knowing some would disagree with it. She said achieving peace in the Middle East must involve Israel, Palestine, the UAE and the U.S. if it is to provide stability and prosperity to the region.

“There will always be those who prefer violence to peace, but overall this deal makes the region safer and more stable,” said Otaiba. “It is an achievement centered around diplomacy and dialogue, an opportunity to move forward on numerous fronts: political, economic, and cultural.”

Hamas, the Islamic Jihad movement, and other entities that antagonize Israel describe the deal as a betrayal to the Palestinians.

And other, more subtle pessimists who tried to sabotage Thursday’s agreement expressed suspicion that Israel would never commit to halting its plans to annex parts of the West Bank. That assumption was rejected by the Mayor of Efrat, Oded Revivi—who had been in talks with representatives from the U.S. administration about the deal. Efrat is a Jewish settlement in the Judean Mountains of the West Bank.

Revivi said postponing the application of the Israeli law which declared sovereignty over the West Bank is a fair price to pay for a peace agreement with the UAE.

In an exclusive interview with Zenger, Reviv said: “Netanyahu has agreed to postpone the application of Israeli sovereignty in order to formalize Israel’s relationship with the Emiratis and hopefully other Gulf States. With Netanyahu saying that, and the Administration indicating that it would not recognize the move right now, it is hard to see how credible an argument that Israel would do so anyway at this time.”

The Efrat mayor stressed that new developments allow Israel the opportunity to present the reality of life in Israel without the filter of a corrupt and repressive Palestinian Authority.

“In due time I would expect the Emiratis and others to recognize the huge distinction between Palestinian people and the corrupt PA extends even to the controversial issue concerning Israeli sovereignty in Judea and Samaria.”

Reviv said he has high hopes that Thursday’s deal will start a new era in the region. “I certainly hope it is the beginning of a peaceful era, and a recognition that there are bigger priorities in the Middle East than the Israeli-Palestinian conflict,” he said, adding that terrorist organizations that reject any kind of normalization with Israel have found themselves humiliated by more practical and cooperative Arab Middle East states.

Saudi writer Ahmad al-Farraj emphasized on importance of the Israeli commitment to the Arab world, stressing that this historic deal would pave the way for a new dialogue to achieve peace between Israel and the Palestinian people.

Farraj described the general sentiment in the counties of the Gulf Cooperation Council as overwhelmingly positive, pointing out that the Saudi Arabian people are beginning to shed their old, habitual frame of the Middle East. “The Saudis are changing their perspective of who their real enemy is. It is not Israel anymore,” he said.

The Saudi political analyst said Iran and Turkey are now the threats in the region.

“Iran has been trying to seize control of Iraq, Lebanon, Syria and Yemen while the Muslim Brotherhood via Turkey is expanding its influence in Syria, Lebanon and Libya. These are the real enemies, especially for the people of Saudi Arabia, U.A.E. and Bahrain,” Farraj said.

He said the people who oppose the deal are watching Qatar closely because it was the first Gulf country to normalize its relations with Israel—and also watching Turkey and the Muslim brotherhood for negative reactions designed to inflame tensions again.

The historic Abraham Accords also put Russia on its back feet: Its negotiations to form trade alliances across the Arab world have largely failed. Some of the Trump administration’s have succeeded.