Who Shopped the Sheriff? Lawman Faces Recall For Banning Masks Among Deputies

The sheriff in Washington state said “I feel like crap” after judge approves petition to kick him out of office. 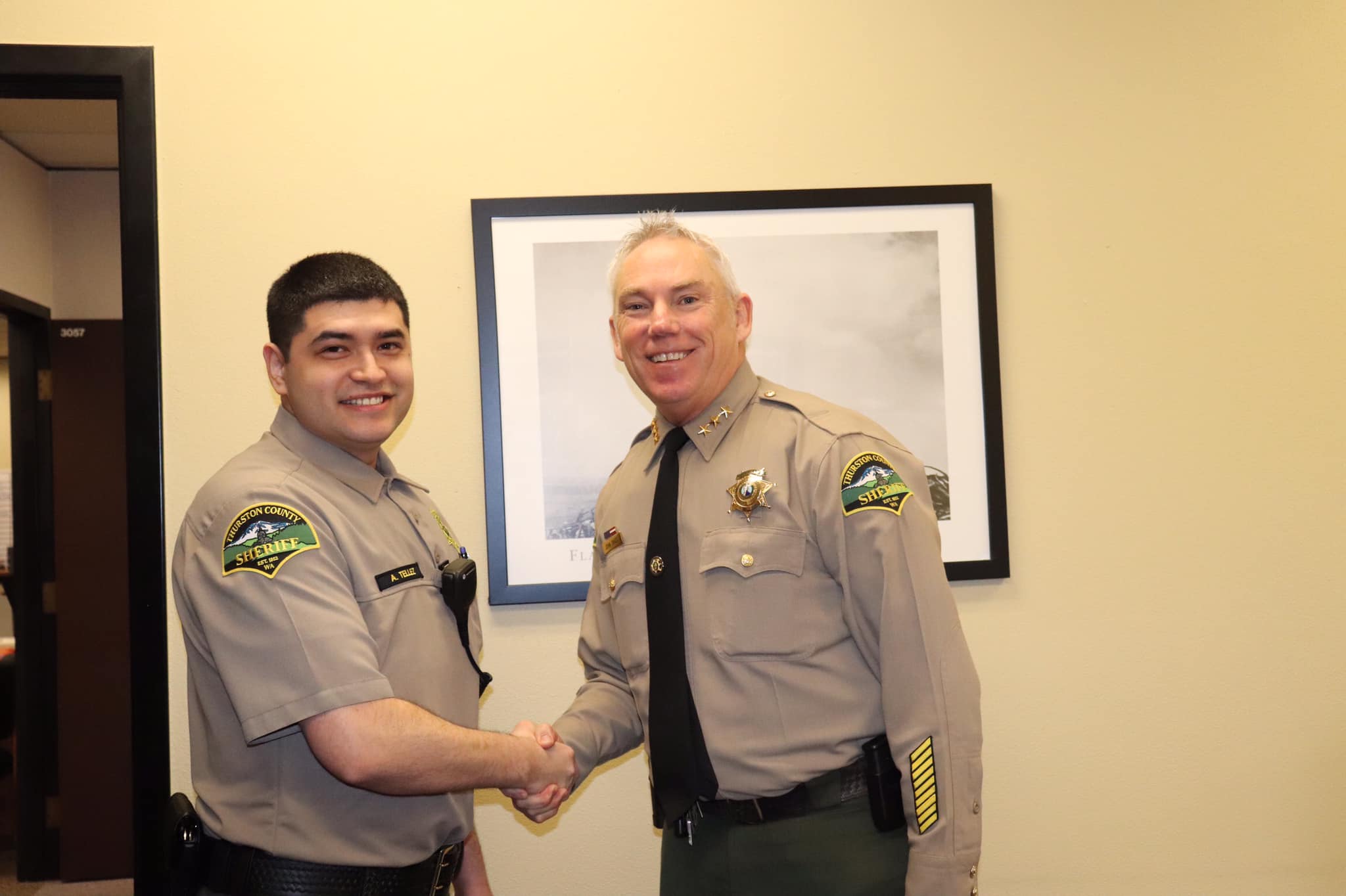 Thurston County’s sheriff may face recall for failing to sufficiently enforce a mask mandate enacted by the Washington Health Department.

The health department’s Amending Order 20-03 follows Washington Gov. Jay Inslee’s declaration of a State of Emergency to deal with the novel coronavirus.

Washington’s mask mandate, in part, requires that people wear face coverings in public spaces and shared places, indoors and outdoors, with some exceptions. Penalties for violating the order include a jail sentence up to 90 days, a fine of $100 for individuals and a fine of $10,000 for businesses.

Petition No. 20-2-01749-34 — “to determine sufficiency of recall charges and for approval of ballot synopsis” — was filed July 2 with the Thurston County auditor by Arthur West and approved by Superior Court Judge Jeanette Dalton July 29 because “an absolute, unilateral refusal to honor the legislators and the secretary of the Department of Health is a classic violation of the oath to follow the law.”

“It’s disheartening to hear that from a judge,” said Thurston County Sheriff John Snaza. “I’ve said this before, but I feel sick to my stomach about it. I feel like crap for how the judge took it.”

Snaza’s department had announced on its Facebook page that it would not criminally enforce the mask mandate “due to the minor nature of this offense.” Other law enforcement entities, including the Olympia Police Department, issued similar statements.

West alleges that Snaza’s policy is a “refusal to perform the duties of his office … impeding State, City, emergency management and hospital officials in their efforts to protect the public during a worldwide pandemic” largely due to the politicization of mask-wearing.

The petition reads: Thurston County Sheriff John Snaza has stated that he will not enforce the criminal provisions of Department of Health Order 20-03. In combination with the politicization of the mask issue in other counties and throughout the Nation, Sheriff Snaza’s actions must be viewed as a political effort to undermine the rule of law and our national and statewide efforts to combat Covid-19. …To the extent any of these acts continuing to refuse to enforce the law were discretionary acts, they were manifestly unreasonable.

The petition also cites the department’s failure to mandate masks for deputies and refers to a statement by Snaza’s twin brother, Lewis County Sheriff Robert Snaza, referring to mask-wearers as “sheep” and “encouraging them to forego wearing masks.”

West argues that since the Thurston County sheriff has failed to enforce the law and perform the duties of his office, he should face recall.

“Sheriff John Snaza’s statement encouraged residents to violate the emergency efforts of the County, state law, and a public health official’s Orders, were ‘reckless,’ and endangered the rest of the community,” the petition reads.

Dalton’s ruling did not determine whether West’s charges are correct but instead whether the petition met the legal standard for recall and can be made actionable.

“How I phrased it when I made those statements, she felt it was improper,” the sheriff said of the judge. “It’s not my intent (to not enforce), me and my deputies enforce the law. My objective was to say that we’d educate people about masks instead of arresting them.”

For the recall to be considered on an electoral ballot, West must file with the county’s auditor’s office, providing a petition within 180 days that contains at least 23,027 signatures. Snaza can file an appeal before it’s placed on the ballot.

A statement from the attorney’s office said, “As of July 31, our office and Thurston County has not determined who will be representing Sheriff Snaza if he chooses to appeal the Superior Court decision to permit a recall.”

Snaza is not the first sheriff to face criticism for a response to Covid-related ordinances.

In Washington, Snohomish County Sheriff Adam Fortney faces a recall effort after posting on Facebook in April that Inslee’s stay-at-home orders are “unconstitutional” and he would not enforce them.

Snaza said he hopes he’ll be able to maintain the confidence of county constituents if the petition is successful.

“I’ve never looked at myself as a politician. I look at myself as an elected,” he said. “As an elected, I hope I represent the citizens and enforce the laws and exercise professionalism in every interaction I have with them and ultimately hold myself and the department responsible. I don’t just want to start behaving a certain way because it’s election season. It’s what I do. I’m not perfect. I’d be lying if I said I didn’t make any mistakes, but I’m going to fight to keep my reputation.”

The National Sheriffs’ Association did not respond to requests for comment.

The sheriff system of law enforcement became widespread in the United States during the 19th-century westward expansion, when territorial law enforcement was spotty due to an absence of consistent and enforceable centralized authority.

Historically, sheriffs had some leeway in enforcing laws via the “doctrine of interposition.”

In Washington state last year, sheriffs in 20 counties announced they would not enforce certain firearms restrictions.

As elected officials, they’re mostly autonomous and answer to their constituents.

Some states, such as Connecticut, have abolished the sheriff system and eliminated the office of “high sheriff.”