Russian woman dies after shedding 443 pounds and overdosing on antidepressants

Lyubov Nurdinova’s weight loss made her a celebrity, but she was clinically depressed. 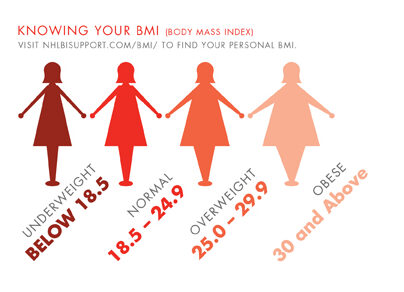 The Body-Mass Index is a ratio of height to weight that public health officials use when classifying people as underweight, normal, overweight or obese. (U.S. government photo)

A former school cafeteria cook in Russia has died after losing 443 pounds to escape the stigma of her obesity.

Mother of three Lyubov Nurdinova, had appeared with her children and doctor on the Russian TV show “On Air Live,” documenting her ongoing weight loss journey.

Her son Alexey, 25, revealed during the broadcast that he became his mother’s primary caretaker at just 7 years old. He said he was finally able to socialize while she was hospitalized, and met a girlfriend. “We had a great time, as I did not have to take care of her. But now everything is back, and she is back in the apartment and I have no personal life again,” he said.

When his older brother Alexander was contacted by local media in Russia, he hung up on the reporter.

Nurdinova was confined to her home and lost the ability to walk unaided after she rapidly gained hundreds of pounds following her third pregnancy.

The cause of her death has not been determined, but she had previously overdosed on depression medication.

Family members all passed lie-detector tests on live TV, discounting anyone’s involvement in the overdose, but revealed their frustrations from caring for Nurdovina, even as her weight plummeted from 771 to 328 pounds during a hospital stay. The test indicated, however, that her children had hoped she would die from her overdose.

Nurdinova stopped answering her door or receiving visitors soon after the broadcast, and continued to live that way until her death.

She was expected to undergo stomach reduction surgery in April, a procedure that shrinks the human stomach to the size of a tennis ball in order to limit food intake. The weight-loss came while she awaited the surgery, and enabled her to walk for the first time in 18 years. She saw the operation as the start of a plan to one day get dressed up and go out on the town instead of wishing for her own death.

Nurdinova became a local celebrity after more TV appearances featured her weight loss success, but her family members still resented her inability to function without them.

“In addition to the physical struggle she faced, her appearance on the TV show most likely exposed her to high levels of weight stigma,” she said. “Nurdovina’s story forces us to recognize that obesity affects more than physical health, but also mental and emotional health.”

A 2008 study published in the academic journal “General Hospital Psychiatry” showed clinically depressed middle-age women are more than twice as likely to become obese than those of a healthy weight. While 25.4% of middle-age women without depression become obese, that number jumps to 57.8% for those with moderate to severe depression.

That same year the World Health Organization concluded that more than half of all Russians are overweight, and 26.5% are obese. The study predicted that by 2030, 29% of Russia’s population will be obese.

Morbid obesity, a term that applies to people with the highest body mass index, has been linked to suicidal behavior in a 2013 German study. One-third of women in that category showed suicidal behavior.

A person’s BMI is his weight in kilograms divided by the square of their height in meters. A BMI of 40 coresponds to a 247-pound person who is 5 feet, 6 inches tall.