6 out of 7 rural people in Cameroon lack electricity, but progress comes at a price. 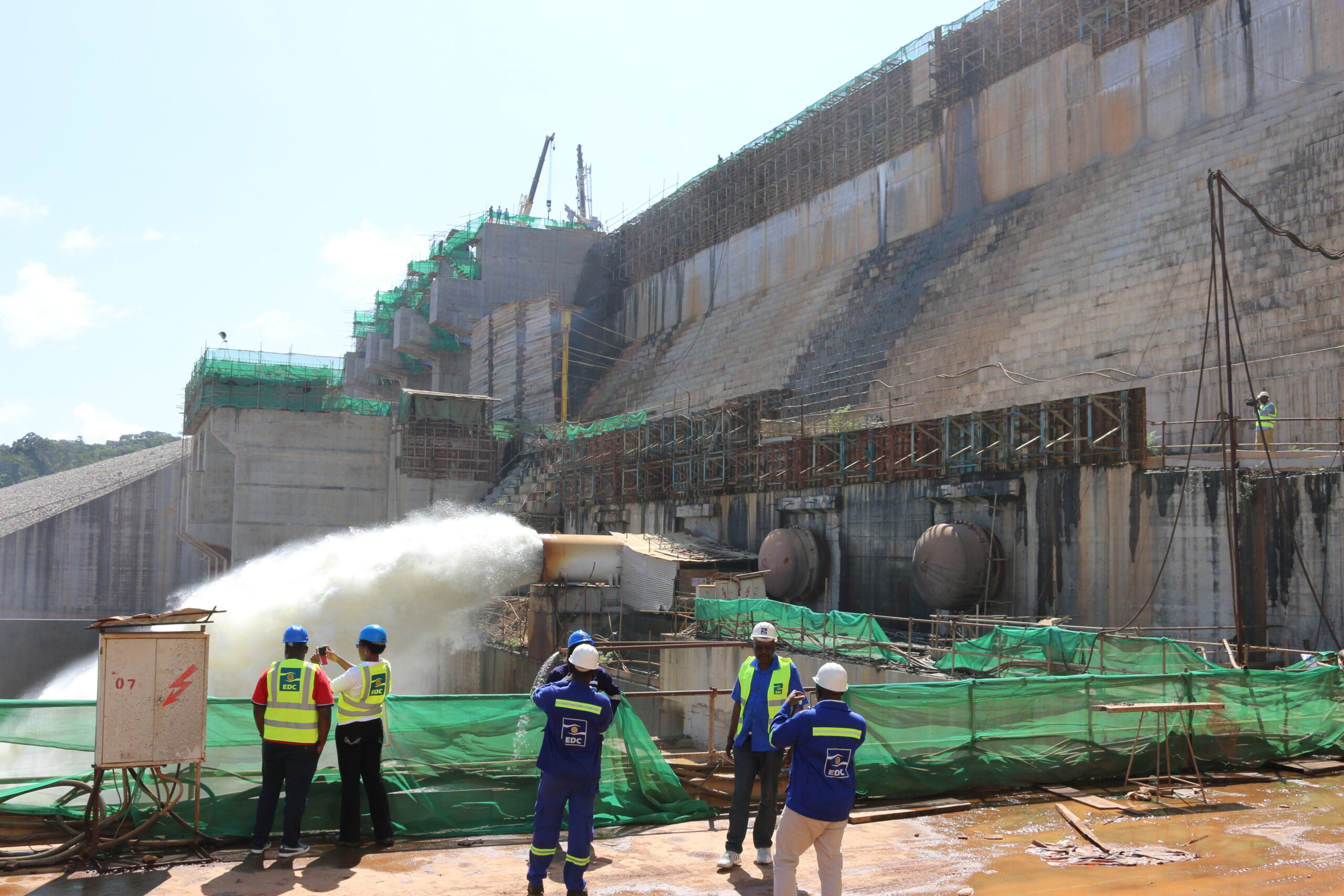 An aerial view of the incomplete dam reservoir in East Cameroon, pictured on August 17, 2016. (Courtesy: SAILD)

Ma’a Anne Claire is a struggling mother of six, living in the Central African nation Cameroon. She works hard tending to crops, such as plantains and cassava, a starchy root vegetable to provide for her children. But a large-scale power project threatens her and thousands of others in the rural region as the country struggles to get electricity to its people.

For generations, agriculture, fishing and hunting were the mainstays of rural communities in Cameroon’s East Region. But when the government started building the Lom Pangar hydroelectric power project eight years ago, thousands of people in the area started losing large areas of land.

“I have lost large portions of farmland containing cassava and plantains. The returns from the little portion I now cultivate cannot satisfy my needs. My son has stopped schooling because I don’t have the means,” Claire said.

The dam’s large reservoir—540 square km (208 square miles) with a 6 billion cubic meter capacity (212 billion cubic feet)—damaged 19 villages, affecting more than 8,000 people, according to the environmental and socioeconomic impact assessment of the project published by the African Development Bank.

Today, flooding is an even bigger problem for the area villagers. The waters of the lake created by the dam have been flooding large portions of agricultural and forest lands, with severe consequences on the inhabitants of the area and the ecosystem.

Situated approximately 90 km (60 miles) north of the city of Bertoua in eastern Cameroon, and almost 400 km (250 miles) from Yaounde, the nation’s capital, the Lom Pangar hydroelectric power project is expected to regulate the flow of the Sanaga River, to increase power generation of two downstream hydropower plants during the dry season.

“The flooding changes as the years go by,” said Ghislain Fomou, program officer at SAILD, an environmental nongovernmental organization that carried out a Global Forest Watch-sponsored project to determine the socio-environmental impact of the dam on the local population. “In the first years of the dam’s construction and subsequent impoundment, the level of flooding was not the same as it is today. The flooding this time has exceeded what was envisaged by more than 15 meters [almost 50 feet]. The risks of the floods encroaching further into the areas occupied by the villagers are high.”

Lom Pangar is among the ongoing hydropower projects that Cameroon is building to mitigate the severe energy crisis the country has been facing since the early 1990s. The 30-megawatt dam, upon completion in 2021 is expected to provide electricity to 150 locations in East Cameroon and will significantly reduce power outages in an area that is currently being supplied by a thermal plant. The project is being constructed by the China International Water and Electric Corporation.

The socio-environmental cost of the project is weighing heavily on the local populations, three years after the dam was commissioned. These people have been overwhelmed by the influx of large number of migrants and commercial fishermen to the Lom Pangar site, leading to increased demands on local resources.

“We used to do traditional fishing. But now we are unable to fish in the artificial lake. We now watch as commercial fishermen fish. They prefer selling the fish to importers, and we even struggle to buy what we can eat,” said Gilbert Samba, Chief of Deoule Village, one of the affected villages.

Eight years into the construction of the project, costing billions of Central African Francs, more than 36,000 hectares (139 square miles) of forests have been lost, the majority of which have been flooded by the waters of the lake created by the dam, according to SAILD.

The group says the overflowing water from the Lom Pangar Reservoir has started submerging parts of the 68,000-hectare (263-square mile) Deng Deng National Park in Eastern Cameroon. This forest is reputed for having a high level of biodiversity, including some threatened species, and one of the last remaining hardwood forests on the continent.

“The total number of forest lost in the Lom Pangar project’s area of influence is even more than the 36,000 hectares,” said Phanuella Djanteng, Manager of the Global Forest Watch-sponsored project. “This space is twice the urbanized town of Yaounde. More than 6 million tons of carbon dioxide have been emitted since the construction of the dam as a result of these forests lost. This means huge climactic impact on the local populations.”

A representative of the Cameroonian energy company pushed back, saying the project meets World Bank requirements. “We can’t expect the local population to already master water flows during this early stage of the project. Lom Pangar is a structuring project designed to store water during the rainy season which is released during the dry season for other dams. The project was carried out in conformity with the environmental assessment of the World Bank,” said Alphonse Edamak, sub director of environment and quality at the Electricity Development Corporation.

“Those who carried out the socio-environmental impact assessment should have calculated from the fractures underneath how much of the water will be lost through percolation,” said Njilah Isaac Konfor, associate professor of geology, groundwater exploration and exploitation disaster management in the University of Yaounde I in Cameroon.

“Why is so? Because when a water flows in its channel, percolation can only take place within the fracture that traverse it, but when it is dammed and it covers a larger surface area with many more fractures, loss of water through percolation cannot be underestimated. Secondly, in the tropical environment where temperatures are constantly high, a lot of water is lost through evaporation from the total surface area the water covers. If we had proper socio-environmental impact assessment done and the project well implemented, we shouldn’t have been at this level where entire villages, farmlands, thousands of hectares of forest and it occupants are being destroyed and the rest at the mercy of the unknown.” 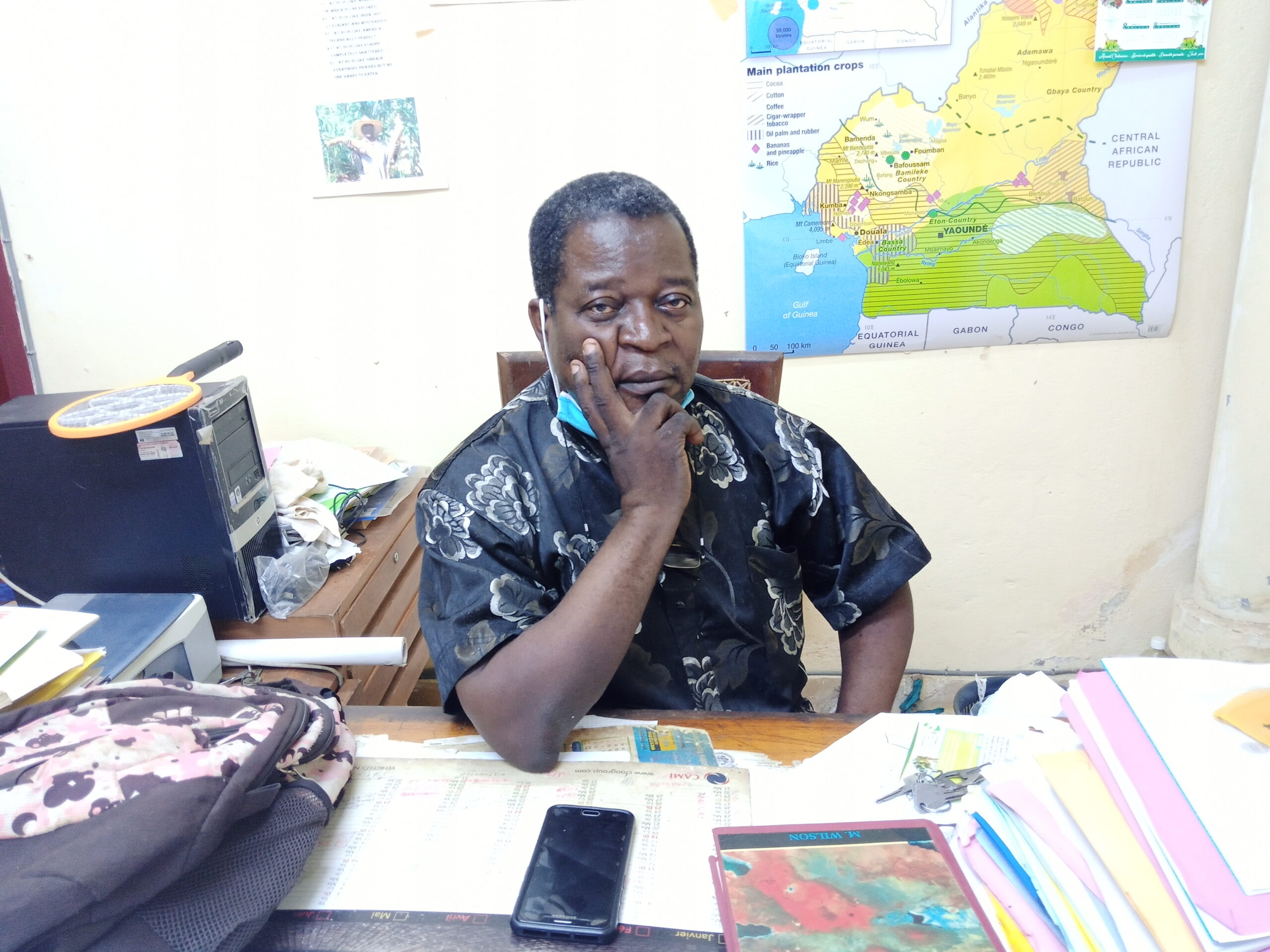 Professor Njilah Isaac Konfor poses for a picture in his office at the University of Yaounde I in Cameroon on June 24, 2020. (Nalova Akua/Zenger)

A lower water level than expected will affect the amount of energy the dam can generate.

“It was a project conducted without the foresight of the post-socio-environmental impacts and hoping to deliver hydroelectricity to vast majority of Cameroonians,” Konfor said. “From the conception to the implementation, many things seem to have outpaced the vision. Now we are just at the beginning of the dangers posed by this mighty project.

“Knowing the position of this country on the corruption perception index, how can you convince me that brown envelopes did not pass under the table during validation and implementation phases of this lofty project?” Konfor said.

Cameroon relies mainly on hydropower energy for electricity generation with persistent power cuts throughout the country, especially in the dry season. However, the country has abundant reserves of energy resources, including natural gas, solar, wind and geothermal energy. Electricity coverage in Cameroon stands at 74%, with about 50% access to the population, according to the country’s minister of economy, Alamine Ousmane Mey. A 2017 World Fact Book report indicates that 9 million of Cameroon’s population of 25 million lived without electricity that year.

The country has the third-largest hydropower potential in Sub-Saharan Africa, estimated at more than 12,000 MW, with the Sanaga River basin providing half of the untapped potential. In addition to Lom Pangar, the government is building another dam on the Sanaga River, the Nachtigal Dam, further increasing the nation’s dependence on hydropower.

“It is high time Cameroon changes her energy sources. We have 12 hours of abundant sunshine daily. Why don’t we put more efforts to make this source of energy as a priority?” Konfor said. “We also have lots of potentials for wind energy which can complement and substitute sustainably hydroelectric power. Cameroon has Uranium in Poli and Lolodorf that can be mined and used in nuclear stations to provide more stable and cheap energy for homes and industries.”