MEET AN ANIMAL: A teenage rancher saved her horse’s life. Together, they became champions.

The vet said Rocky was “injured beyond belief,” but Bridget Romey refused to give up. 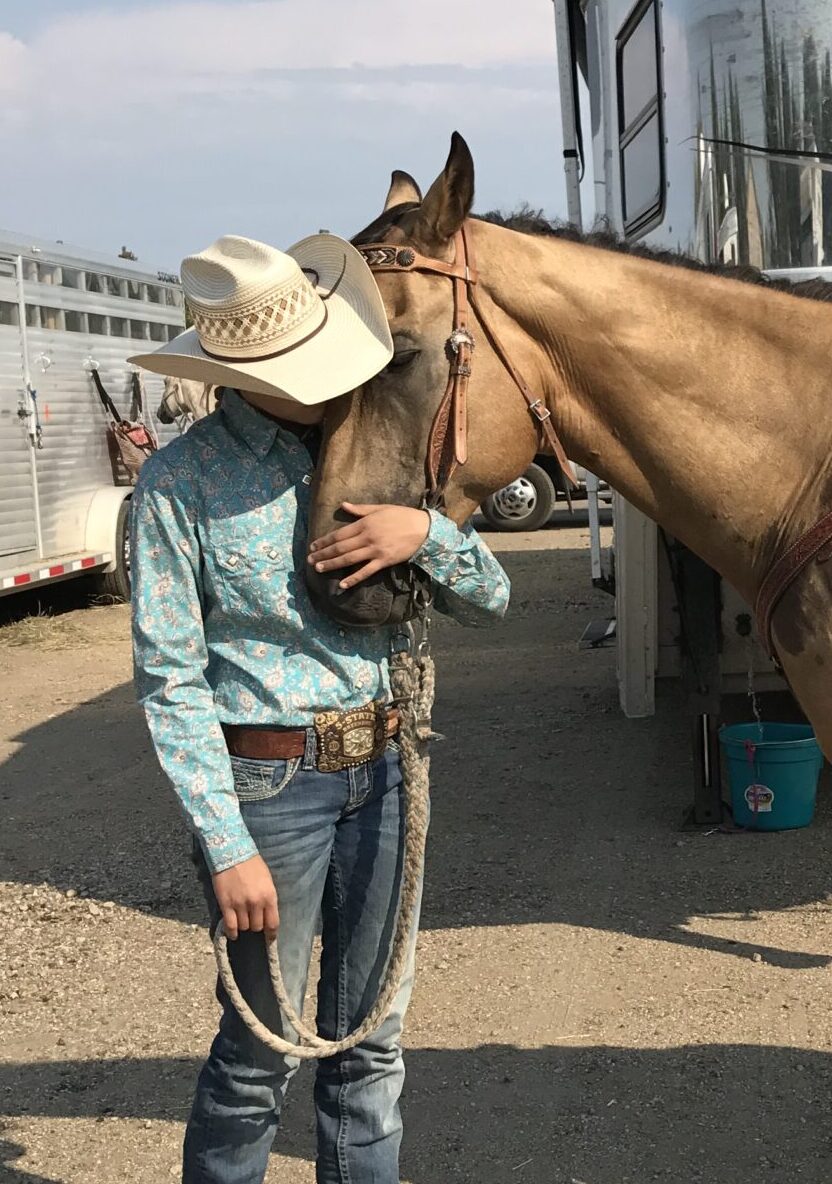 Winning a rodeo event in cowboy country is a big deal if you’re a ranch horse. Doing it less than a year after a razor-wire fence sliced one of your front legs to the bone is a tearful Hollywood comeback.

His name is Rocky. He’s Bridget Romey’s horse. He stands about 5 feet tall from the ground to the shoulder and he weighs nearly 1,200 pounds. He’s a 15-year-old barrel racing champion.

But there he was on an autumn Saturday in 2016. Standing in a pool of his own blood, quietly dying.

“My best friend found him,” says Bridget, 16. “Thank goodness—if it had been anyone else, they might not have gone back to check on him.”

That friend had passed the Romeys’ paddock on her way to pick Bridget up for a volleyball game in the pre-dawn chill. She noticed the horse “standing funny” and “knew immediately that something really bad had happened,” Bridget says.

Bridget’s dad Gary rushed to his stables. Mountain lion tracks in the mud told him a familiar story: One of the predators had spooked the horses during the night, and Rocky ran into a fence as he tried to lead the others to safety. He yanked off nearly 70 feet of barbed wire before he broke free.

“The leg was torn all the way to the bone joint. He could barely walk,” says Bridget, who found it difficult for months to talk about what she saw that day. The razor-sharp fencing had severed the deep digital flexor tendon on Rocky’s left front leg—a band of connective tissue that gives horses stability when they stand and stores energy with each stride when they run.

A rodeo is fast-paced live entertainment, and barrel racing is a timed event for women and girls who ride American Quarter Horses—named because they can generally outrun other breeds at distances up to a quarter mile.

Barrel racers bolt into a noisy arena at breakneck speed, complete a cloverleaf pattern of tight turns around three barrels arranged in a triangle, and sprint out as fast as they can.

The tighter the turns, the better the time. It’s a 15- to 30-second blur, depending on the size of the arena. It’s a sport for the fit, the fast and the powerful.

Suddenly Rocky was none of those things. A team of humans buzzed around him for a few hours, trying to keep him alive. Dr. Kayla Brown, a 10-minute drive away at Fall River Veterinary Clinic, stabilized him for the 82-mile trailer ride to an equine specialist.

“Rocky was injured beyond belief,” Brown says. “We had a frank conversation. Most horses would have been put down.”

Rocky left Brown’s clinic bandaged but standing on all four legs. He was lying down when he arrived to see Dr. Jason Mez in the town of Sturgis.

“They’d pinched off all his arteries and blood vessels and wrapped it up as good as they could,” Bridget says of Brown’s care, “but they’d missed an artery. So by the time we got him there he was down in the trailer, and he had bled out everywhere.”

Even though Rocky’s condition was improving, his spirit was gone. “He was completely depressed,” Bridget says. “I’d never seen him like that. He stopped eating, he stopped walking around in his pen.”

The Romey ranch in Hot Springs, South Dakota, is a 35-minute drive from Wyoming and less than an hour south of Mount Rushmore.

South Dakota’s “Black Hills” region takes its name from a Lakota phrase describing the dark shadows that soaring ponderosa pines have cast on weathered stone for centuries. Mountain lions cast smaller dark shadows. Urbanites know them as cougars, panthers or pumas, depending on the zoo where they live.

The big cats were hunted to near extinction until South Dakota designated them an endangered species in 1978. This year hunters took just 51, failing to reach the limit set by the state wildlife agency. That left a population whose number conservation groups and governments spar over. It appears to be between 300 and 530.

Either would seem like a small number for such a big state. But 93-degree natural mineral springs—six of them reach the surface inside the city limits—have long made Hot Springs a crossroads. And lions go where their prey goes.

“We seem to be in an area that lions naturally track through,” Sharon Romey says of the Black Hills, “following the Fall River and Cheyenne out of the hills into the prairie.”

The Romeys raise beef cattle, a mix of Angus and Hereford, and horses are working animals on the ranch. It’s a good life with room to run free, keeping cattle where they’re supposed to be and out of harm’s way.

Rocky recovered physically but watched horses with names like Mercy and Big Enough take his place, both on the ranch and at the rodeo.

Bridget knew the human–animal bond runs in both directions. She would ride him again, because “he loves his job.”

Rocky was scarred but eager. It was wintertime and he was a ranch horse again. Bridget gave him simple tasks at first, and says “he came out of his depression” with more rigorous work.

One day he and Bridget nudged a cow into a birthing stall, and the pregnant mother turned away suddenly, making an evasive move. “Rocky lunged in front of her, and turned back really hard,” Bridget says, describing a swift motion only a seasoned ranch horse would make.

“And Dad was like, ‘I think you can start doing barrels on him again.’”

In July 2017 Rocky and Bridget qualified for the South Dakota 4-H Rodeo, and won the barrel racing event in the statewide junior girls division—just 11 months after mangling his leg. Their margin of victory was about one-third of a second.

“Before we ran, I was puking a lot because I was so nervous,” Bridget says with a laugh, and then turns her attention back to her horse.

“He gets really nervous too, just like I do,” she said. “But after he runs, you can tell he’s really happy.”