When ground into dust, these converters can earn thieves hundreds in southern Africa. 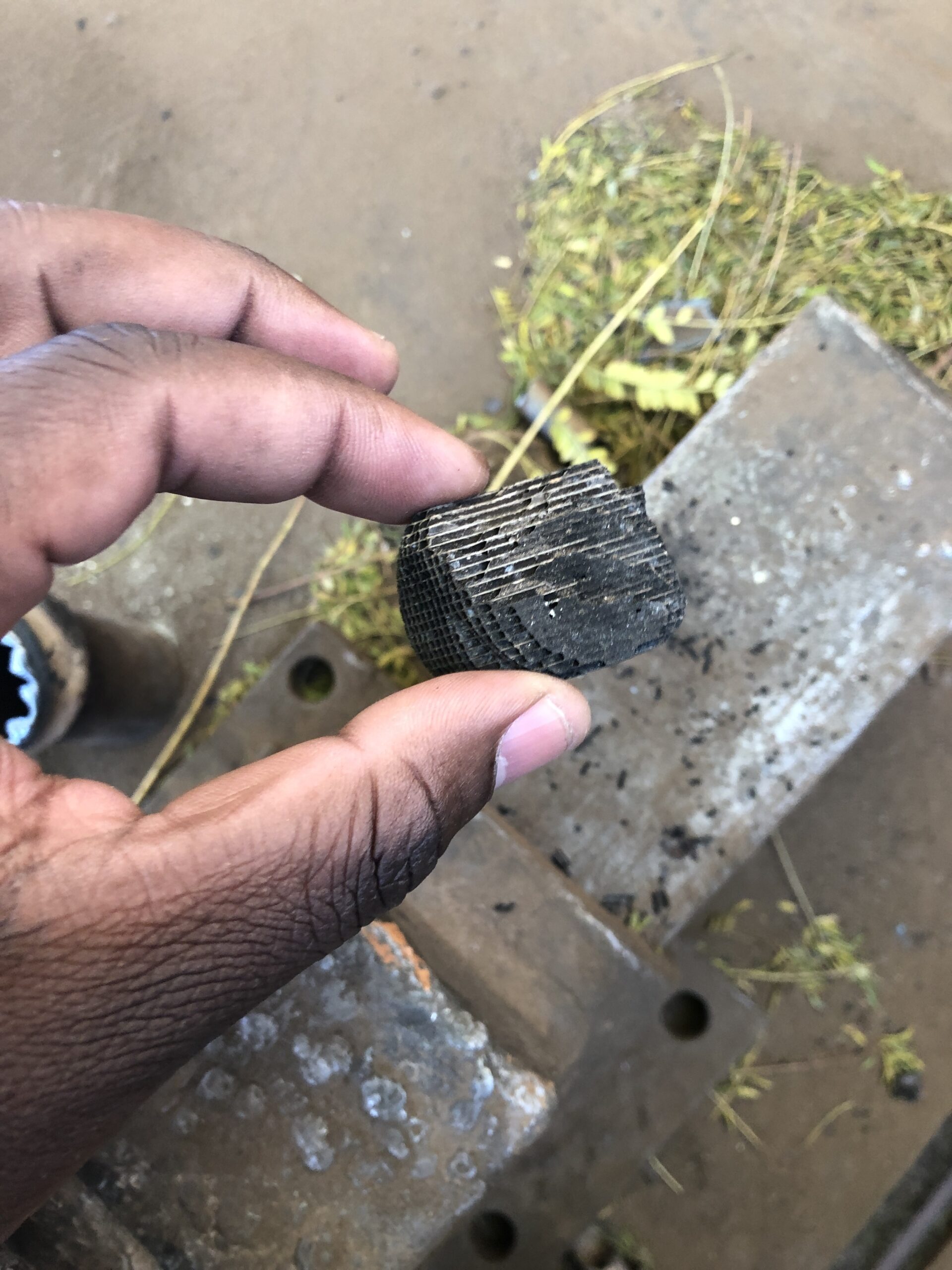 A catalytic converter removed from a truck exhaust pipe before it is ground into dust in a dealer workshop in Bulawayo. (Lungelo Ndhlovu/Zenger)

HARARE, Zimbabwe—Parked behind 50 other cars in front of a gas station in Bulawayo’s Central Business District, early on a Friday morning, 30-year-old Henry Chinula flicks through a magazine he keeps in the car to kill time while waiting for his turn to fill up.

Outside, a middle-aged man with dreadlocks and a brown jacket unexpectedly leans near his closed window and offers a greeting. Chinula hesitantly lowers the window just below his eyes in case it is a distraction for a robbery. To his surprise, the man starts mumbling about exhaust pipe dust and dishonest mechanics who steal from oblivious vehicle owners.

The man offers Chinula what he claims is a good deal in U.S. dollars on his catalytic converter. Many ordinary Zimbabweans have been impoverished due to the economic meltdown and have turned to buying catalytic converters to resell them in Harare. Some businesses, including landlords, have stopped accepting local currency, since its value continues to plummet.

A catalytic converter is part of the emission control system located in a box on the exhaust pipe under a car. More technically, “A catalytic converter is an exhaust emission control device that reduces toxic gases and pollutants in exhaust gas from an internal combustion engine into less toxic pollutants by catalyzing a reduction and oxidation reaction into less harmful gases such as carbon dioxide, water and nitrogen gas,” said Lawrence Mashungu, a climate change mitigation and renewable energy expert who works in the Climate Change Management Department of Zimbabwe’s Ministry of Lands, Agriculture, Water, Climate and Rural Resettlement.

Removing catalytic converters is a booming business in Zimbabwe because the dust they give off is rich in platinum, palladium, rhodium and sometimes gold that can be easily sold in markets in Zambia and South Africa where they can fetch more than $200, Wellington Madumira, a lobby and advocacy officer for the Zimbabwe Regional Environment Organization (ZERO), told Zenger News.

Some catalytic converter dealer groups, such as “Procatzim,” advertise on Facebook that high-end models can fetch car owners up to $170, while ordinary ones are worth $100. Once removed or damaged, it generally costs between $1,000 to $2,500 to replace the catalytic converter on a vehicle.

“It must be noted that most of the cars that we have in Zimbabwe are from developed countries such as Japan, China, Singapore, the U.K., and the U.S.A.,” Mashungu said. “They are being dumped here mainly because they would have failed the emission level tests in those jurisdictions.”

In Zimbabwe, there is a huge desire to own cars, leading to a rise in imports, specifically of used Japanese cars. The country now has more than 900,000, according to transport minister Joel Biggie Matiza.

“Across the country, there has been a scramble for catalytic converters found in cars imported from Japan since 2019. Most motorists are unaware that dubious mechanics have since made a killing off of the devices taken from their cars,” he said.

Motorist Tapfuma Machakaire said he was duped by a mechanic who led him to believe that the removal of the catalytic converter improves engine efficiency . “As we speak, my car doesn’t have the catalytic converter device because it was removed by the mechanic. I was lucky to be present during my car’s exhaust repairs when the mechanic removed it and told me he was going to pay me $65 USD for the powder,” he said.

“When they are removed from cars, it means we are going to release more toxic gases and emissions into the atmosphere, which will impact the environment negatively,” she said.

The total annual greenhouse gas emissions for Zimbabwe in 2016 was nearly 66 metric tons of CO2, according to data from Climate Watch.

Sidange Vellah said that Zimbabwean law mandates that the agency monitor and inspect vehicle exhaust emissions in the country, which could leave owners open to consequences.

“Those vehicles that are found emitting outside the specifications are either given an environmental protection order to repair their cars,” she said, “or are fined.”