The malnourished mammals were treated by an Argentine foundation and returned to the sea. 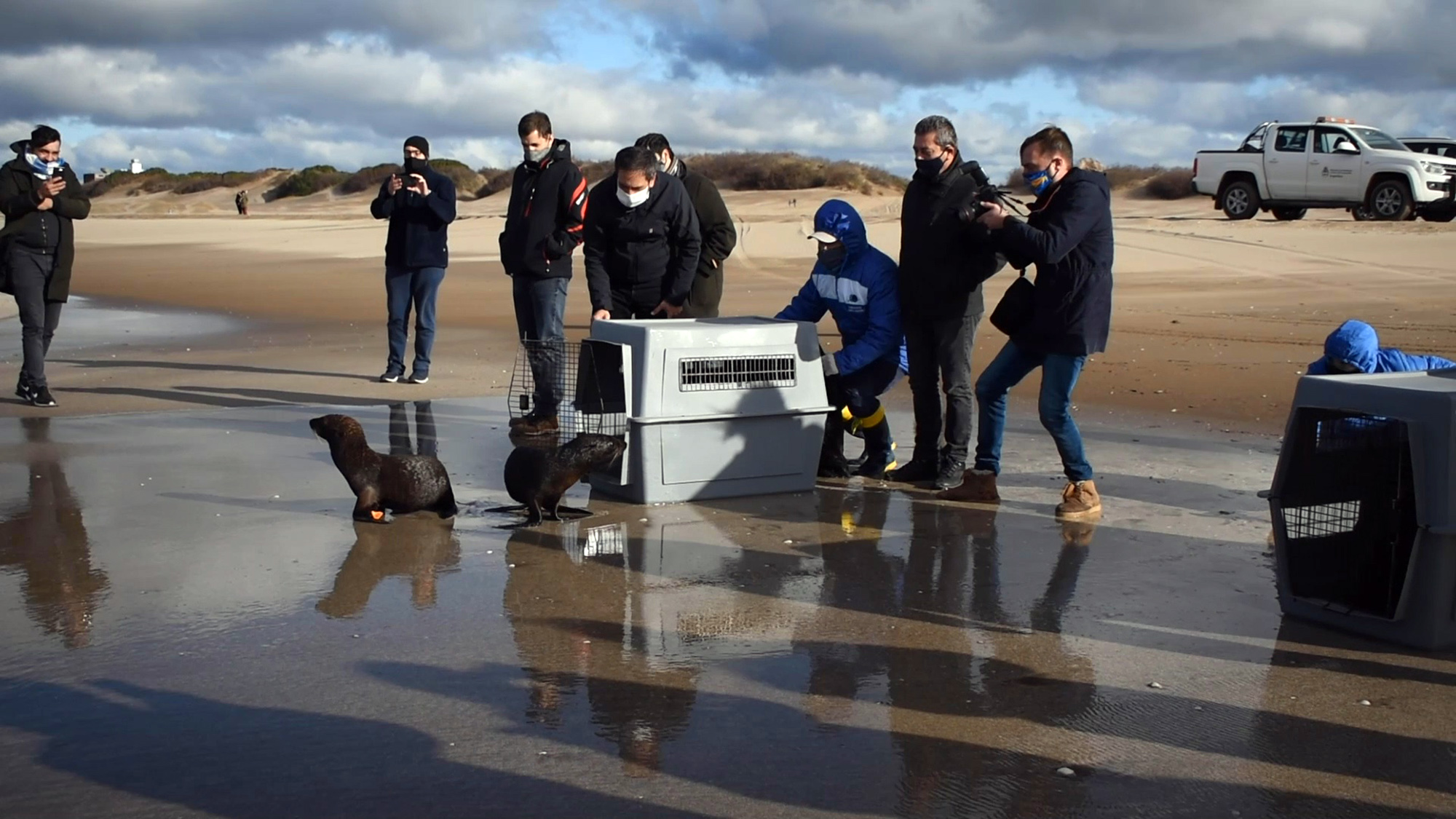 Seals are released to the sea after recovery process. (Mundo Marino/Newsflash)

Four South American fur seals and two Southern elephant seals have been released back into the sea after being found malnourished in Argentine rivers during the past month or so.

The hungry mammals were treated at the rehabilitation center belonging to the Mundo Marino Foundation and then released on Friday into the sea at a beach in San Clemente del Tuyu in eastern Argentina.

According to the MarineBio Conservation Society, the total population of South American fur seals is estimated at between 300,000-450,000. Adult males have a gray-black coat, while females and sub-adult males have lighter coloring on the chests, and the species varies in size regionally. “For example, adult male seals in Uruguay are about 1.5 time larger than adult males in Peru,” the MarineBio site says. “Conversely, adult females in Uruguay are about three-quarters the size of adult females in Peru. On average, adult males measure up to 2 meters [6.5 feet] long and weigh 150-200 kilograms [300-440 pounds]; females measure up to 1.5 m [5 feet] long and weigh 30-60 kilograms [56-132 pounds]. ”

The fur seals’ diet also varies by locale. “South American fur seal adults in Peru feed almost exclusively on anchovies, and juveniles there feed on demersal (living near the bottom of the sea) fish,” Marine Bio notes. “In Uruguay, their diet consists of anchovies as well as other fish species. In Brazil, this species is known to feed on shrimp and fish, and in Chile, lobster krill is the primary component of the South American fur seal diet.” As for what likes to eat them, the seals’ predators include sea lions, sharks and orca whales.

The total population of Southern elephant seals is believed to be about 600,000. Their diet consists mainly of squid and fish; as for predators, mankind has been most dangerous to the creatures, which were heavily hunted for their oil for centuries. Such hunting of southern elephant seals south of 60°S is now regulated by the Convention for the Conservation of Antarctic Seals (CCAS), and the species receives additional protection in various countries within its range.

How did the six recently rescued seals end up out of the ocean? Mundo Marino Foundation biologist Sergio Rodriguez Heredia said in a press statement that “most of the young animals that go into freshwater looking for food can end up entering the local rivers.”

The foundation adds that while the seals brought to its facility by various animal-rescue groups were suffering from malnutrition, “they had a blood test and underwent treatment for dehydration, hunger and parasite removal.”

The seals were then ready to be set free.

“Despite the difficult moments during the pandemic, we were overjoyed to see how we gave a second chance to these animals,” said foundation vice president Andre Cabrera.