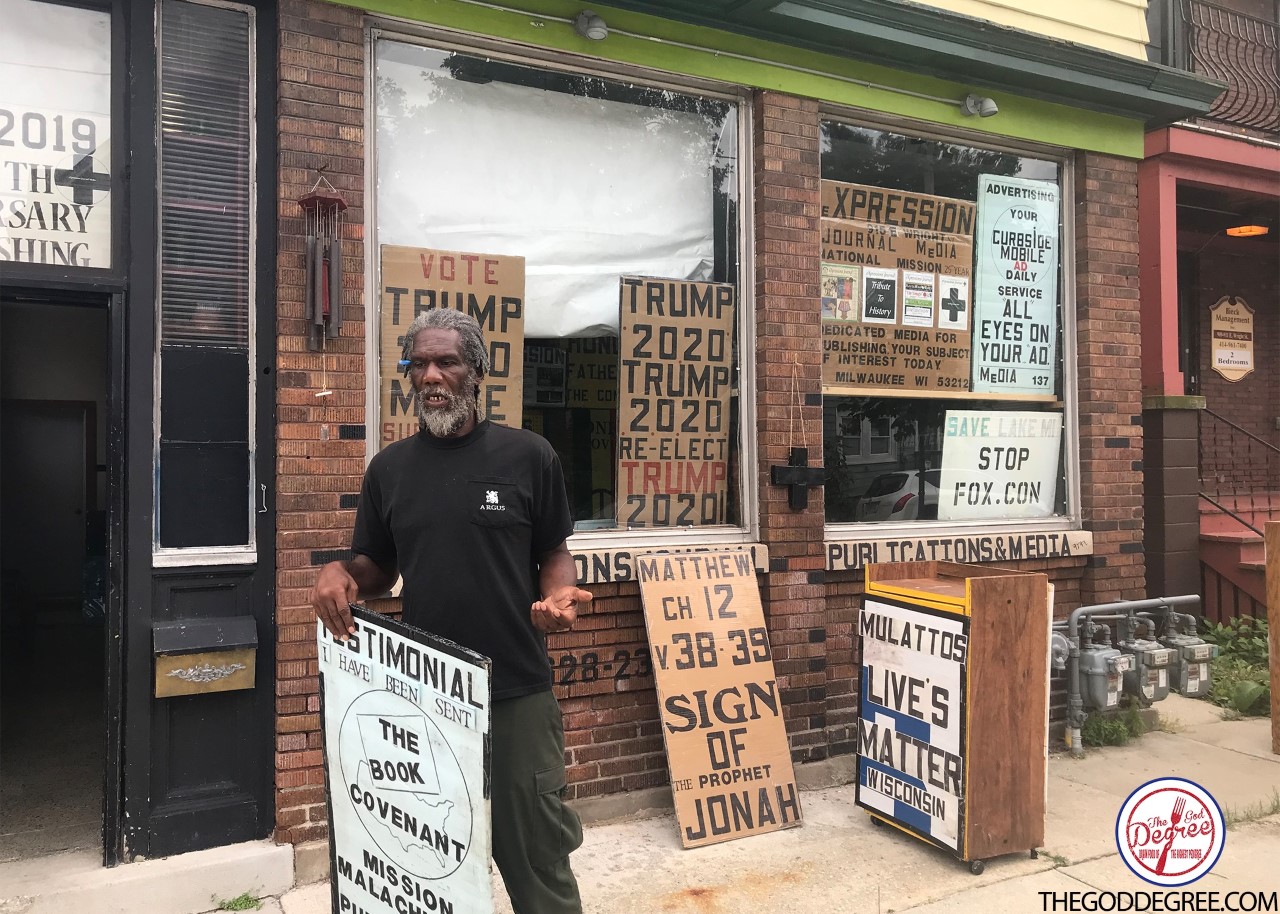 Bernell Tramell stands outside his building with signs. (Adebisi Agoro/Thegoddegree.com)

Bernell Trammell, a local personality of Milwaukee’s Riverwest neighborhood who was known for his political activism and religious proselytizing, was shot and killed in broad daylight.

Trammell, a vocal Rastafarian sometimes nicknamed “Ras,” was known to his neighbors as a “Rasta street preacher” who would frequently quote Biblical scripture to passersby. He said in one video interview that his support of Donald Trump was a result of religious prophecy and a “sign of the times.”

And Wisconsin Republican Party chairman Andrew Hitt has called for an investigation into whether Trammell’s murder was politically motivated. Trammell was well-known for his support of President Donald Trump, frequently carrying and displaying signs reading “Vote Donald Trump 2020.” But he was also a supporter of Black Lives Matter and Democratic mayoral candidate Lena Taylor.

“Because of Trammell’s well known political activism and the possibility that his murder could be politically motivated, I respectfully request that United States Attorney Matthew Krueger open an investigation into this heinous crime,” Hitt said in a statement. “No American should fear for their personal safety because of where they live or their political affiliation.”

The 60-year-old was killed at 12:30 p.m. last Thursday outside the office of eXpressions Journal, a business he owned and ran that published political and religious materials. Police described the suspected shooter, who was captured on closed-circuit video, as a man in his 30s, approximately 6 feet tall and weighing roughly 200 pounds. Screen captures released by police showed the suspect wearing a black mask that covered part of his face, a red-and-white baseball cap, a black-and-red long sleeve shirt with white text on the front, light-colored pants and black shoes.

Despite his eccentric politics and presentation, Trammell was respected and liked by many in his community.

Vaun Mayes, a community activist who has been involved in recent anti-racism and anti-police brutality protests, called Trammell “a community elder and beloved figure” and organized a vigil for him outside the eXpressions office.

Kevan Penvose, a local pastor and activist, wrote on his Facebook page:

At the community vigil today I didn’t see any of these GOP officials who are now trying to use my neighbor’s tragic death as a wedge issue. But black community leaders were there to pay respects to the man known as Ras and Halo, because Black Lives Matter means All Black Lives Matter, which has nothing to do with partisanship as we strive for justice in unity. … Ras Trammell was a man with whom I hardly ever agreed about anything he wrote on his signs, but also, as a Rasta street preacher, he was one of the people that make my neighborhood so uniquely wonderful.

Any information regarding Trammell’s murder can be relayed to Milwaukee Police via phone at 414-935-7360, or via Milwaukee Crime Stoppers at 414-224-TIPS. Sgt. Sheronda Grant, a spokesperson for the Milwaukee Police Department, said the department has yet to identify a motive and is still seeking a suspect.