Amid church closures in Los Angeles, a well-known televangelist is going back to his roots 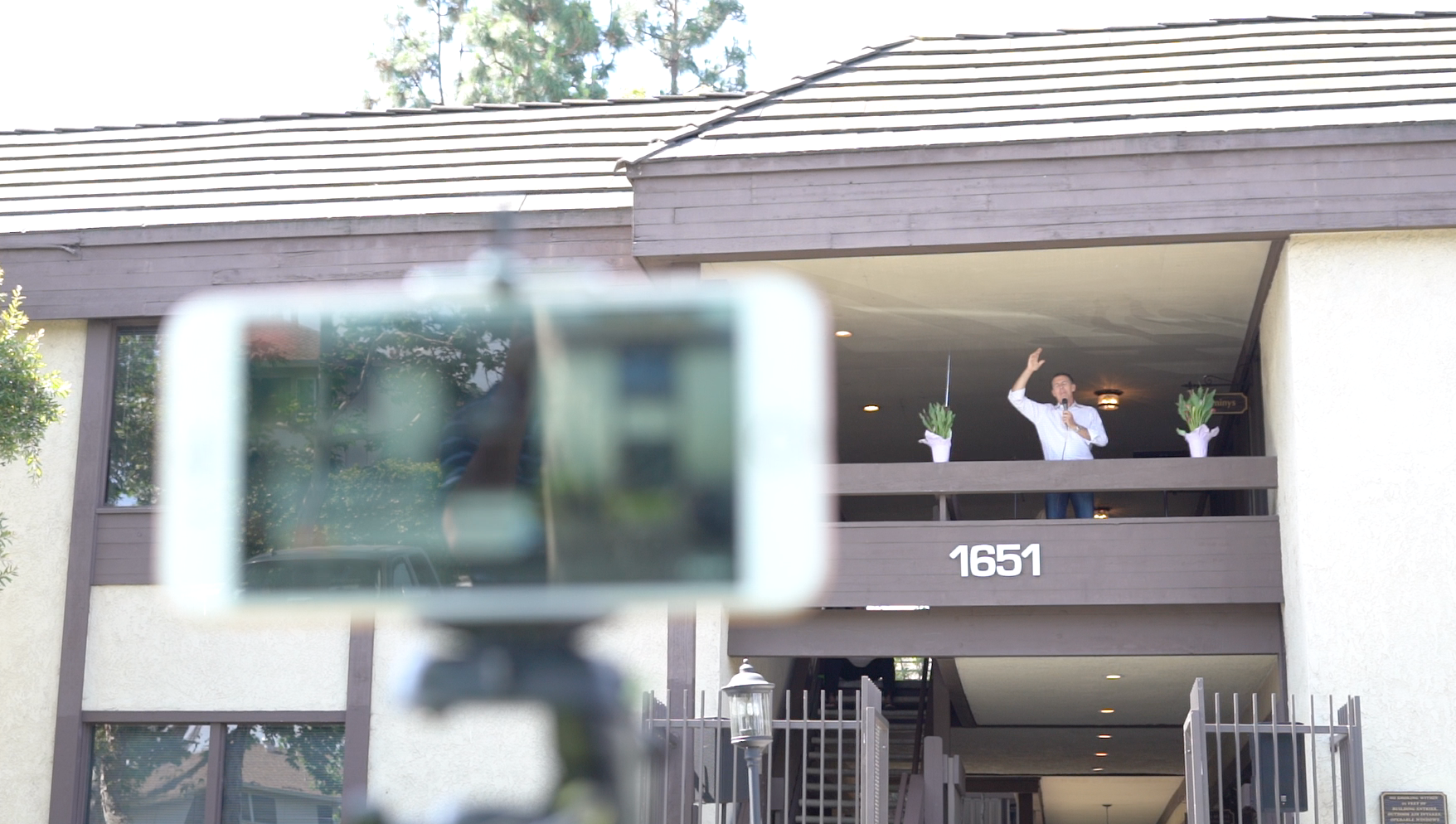 Robert Schuller stands from the apartment balcony to address his congregation while a smartphone livestreams the talk to those who cannot be there. (Bart Vandever/Zenger)

LOS ANGELES—When the Covid-19 pandemic hit Los Angeles earlier this year and all churches in town were ordered to close, the Rev. Robert Schuller had only to look back to his roots for an answer of what to do: resurrect the drive-in church service.

In 1955, one year after Schuller was born, his father, Robert H. Schuller, began preaching at a drive-in movie theater in Garden Grove, California, climbing up onto the roof of the snack bar to address the congregation. The sermon’s style was in line with the times, as car culture was taking over and drive-in movies became a popular meeting ground for people from all walks of life.

The service proved a hit. Crowds grew, and soon Robert A. Schuller was following in his dad’s footsteps and began preaching as a kid to the crowds at Sunday services. He was a natural.

The younger Schuller has carved out a singular presence in the world of televangelism over the past 40-plus years. The reverend, along with his father, built a following by preaching to audiences on their “Hour of Power” weekly television program, which paved the way for others in the modern televangelism movement that gained steam in the 1970s and has continued to the present day.

When Schuller had to hurriedly adapt to the coronavirus this spring, he started calling his fellow preachers and pastors in town, but initially struggled to find a parking lot for his congregation. Then he found an apartment complex in Orange County, California, and the new drive-in church was born.

“On March 30 we held our first service, and there wasn’t another church in town people could go to on that day, and we were the only church for several weeks,” Schuller said. Now other churches in Orange County have followed his lead, conducting similar services.

Schuller conducted the initial drive-in services from a second-story apartment balcony to a modest crowd gathered in their cars in the parking lot, which could hold around 100 vehicles.

“I just love being able to gather people together to worship, sing, and pray,” Schuller said. “This isn’t necessarily my favorite way to do it. I’d rather have a cathedral and have it filled with people and have them reaching out joining hands together, but that isn’t possible. Because of the restriction, this is our best option.”

Followers join every Sunday for the drive-in services, which have migrated to Newport Dunes Waterfront Resort. Congregants are greeted by church members who stand in masks and hand out pamphlets for worshippers to follow along. The service is transmitted to all of the cars through an FM transmitter, and the churchgoers tune in to hear what is being said over their car speakers.

When a good point is made or the audience agrees, they honk their cars in unison. Some churchgoers get out of the car and dance to the music. Some stay in their cars and quietly follow along in their Bibles. As the service progresses, masked men and women with the church walk around with giant sticks and nets attached on the end to safely collect donations and prayer requests from the congregation.

For all those who can’t make it in person, Schuller livestreams the service on YouTube and Facebook, broadcasting from a phone set up on a tripod.

At the end of the service, Schuller talks with his church members. He’s hopeful things will get back to normal and churches will open their doors again soon.

“If I could, I would open my church for people who are not immune-compromised and then keep a drive-in service for those who are compromised or elderly,” Schuller said in May.

This may be wishful thinking. With a July spike in COVID-19 cases, Los Angeles resumed a ban on indoor religious services after a brief reopening at lower capacity. The ministry will conduct drive-in services for the foreseeable future.

But Schuller, like his father, is a master of adapting to the changing times and finding audiences when and where he can. His service is indicative of the times, and this is what worship looks like during the pandemic.