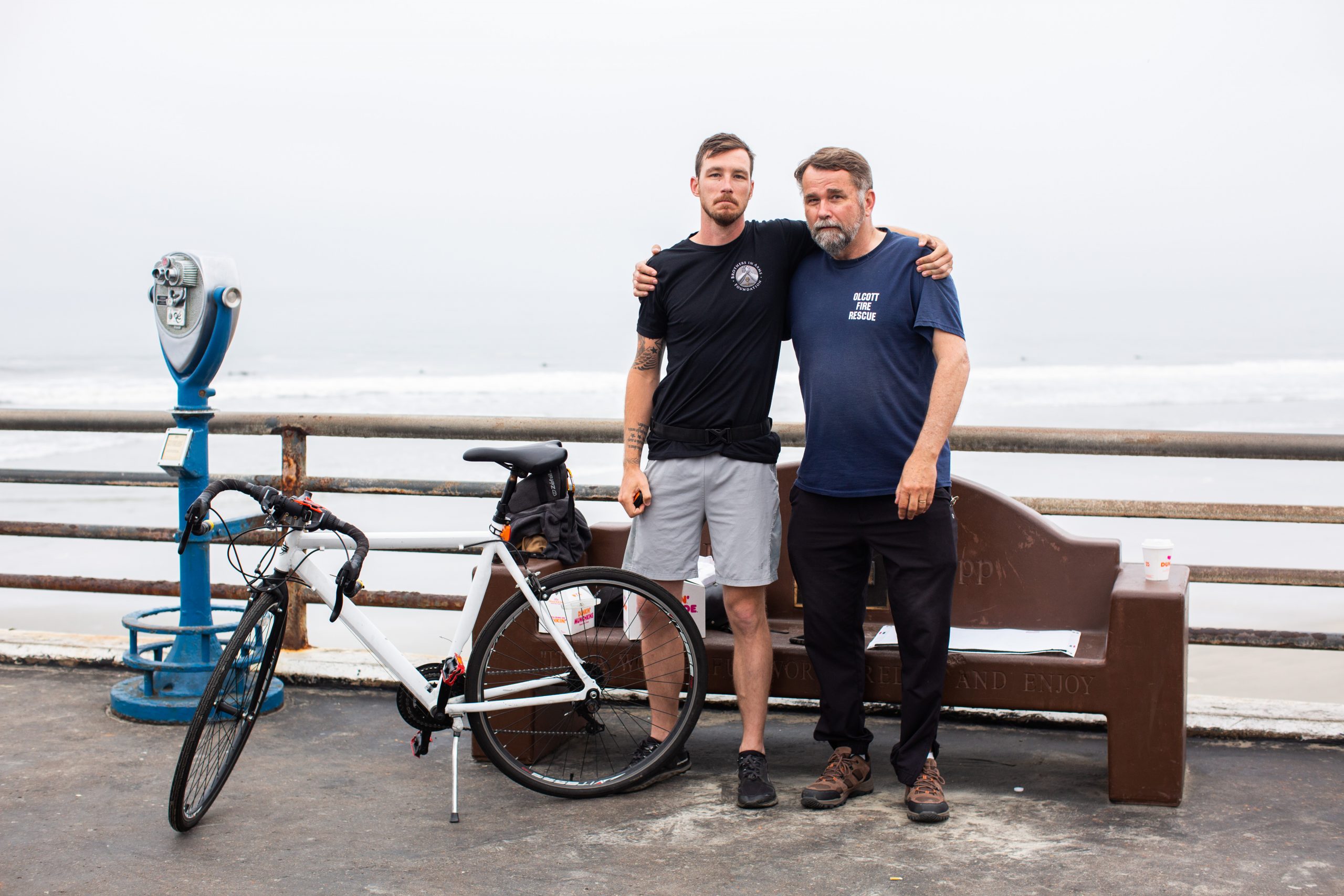 Aaron Vanderbeck stands with his father, Patrick Vanderbeck, before beginning his Raider Ride 2020 across the United States on May 26, 2020 in Oceanside, California. (Shana Thompson/Zenger)

Amid a season of peaceful protests and angry riots erupting across the country and globe in response to the death of George Floyd, one man was quietly taking action for different cause in a different way. He decided to bring light to a dark corner in our society by taking a bike ride. But this was not just a daylong  jaunt—it would take roughly a month and cover roughly 2,700 miles, from one coast to the other.

Aaron Vanderbeck, 31, a retired U.S. Marine, climbed on his bicycle May 26 at the Oceanside Pier in Oceanside, California, to begin a cross-country trek to Wilmington, North Carolina. His quest: to protest an alleged injustice within the United States’ military justice system.

“I’ve had this phrase in my mind for a long time,” said Vanderbeck. “It’s ‘Preach with your feet.’ It’s one thing to speak words – which we’re all really good at, as people – but another thing to translate that into action.”

Vanderbeck, a former member of the Marine Corps’ elite “Raiders” unit, decide to cycle in protest of what he considers to be “an unjust judicial system” against his brothers-in-arms: Marine Raiders Gunnery Sgt. Daniel Draher, Gunnery Sgt. Joshua Negron and Navy Corpsman Chief Petty Officer Eric Gilmet. The three are facing court-martial on several serious charges, including involuntary manslaughter, but Vanderbeck and others say their actions leading to the charges were in self-defense.

That incident took place when the three men, who were deployed to Erbil, Iraq, with the Marine 3rd Raider Battalion, were celebrating New Year’s Eve in 2018 at a local establishment while on authorized leave. While there, they were involved in a fight that ultimately proved fatal for a retired Army Green Beret, Rick Rodriguez.

Rodriguez, who was allegedly intoxicated, reportedly lunged at Draher and swung at him three times. His third swing was blocked by Negron, who then knocked Rodriguez unconscious with his own punch. Gilmet monitored his condition during the night, and when it became clear that he needed emergency medical attention, had him taken to a hospital, where he died four days later.

The U.S. Marine Forces Special Operations Command, or MARSOC, sent a statement to Zenger, declining comment, but adding that it is: “… committed to ensuring legal processes are conducted in a fair and impartial manner. It is imperative to remember that the accused are presumed innocent until proven guilty. In order to preserve the integrity of the military justice system, no additional comments or details can be discussed at this time.”

However, eyewitness testimonies and video evidence reportedly show the Marines, who were removed from their posts and sent back to their homes near Camp Lejeune, North Carolina, acted in self-defense.

With the case going to court-martial, the stakes are high for these men. A general court-martial can impose the death penalty for capital crimes, and oversees serious charges such a rape under the Uniform Code of Military Justice.

He said he hoped that his bike ride would inspire the American public to demand accountability from the military on behalf of all service members by writing to their Congressmen.

“This isn’t about [me] riding a bike,” said Vanderbeck. “This is a means to an end. And hopefully that end is our three brothers being not just exonerated, but justice put back in its place. Maybe this is my optimism that evil would be exposed, that people in leadership that are there for the wrong reasons will be exposed, called out, challenged. I think ‘challenged’ is the right word.”

During his lengthy journey, his wife and six kids cheered him on from Texas, while his father, Patrick, showed solidarity by following him in a vehicle on the route. His “Raider Ride 2020” was broadcast live on the website of the United American Patriots group, which is providing legal support for the three defendants. And members of the Raider community were on hand in Oceanside to send him off, while others were waiting in Wilmington to welcome him.

Vanderbeck says he unofficially finished his ride at Johnny Mercers Fishing Pier in Wilmington at about 10 a.m. on June 24.

“Three days later, we did an official end-party with a silent auction, food, and time for others to show their support for Danny, Josh and Eric,” said Vanderbeck, who also partnered with the Brothers in Arms Foundation on this effort.

When asked about the effect of his journey on the three men’s cause, Vanderbeck said, “I believe it was the right thing at the right time. The ride was all about getting their story out there and getting attention/light to the injustice they and their families are facing and so, by that standard, it accomplished everything it was about. Additionally, a significant amount of money was raised to support their legal defense as well as support the families of those fallen through the Brothers in Arms Foundation. I believe it at least got the ear of the command and I hope in some ways it challenged my brothers who still serve in uniform to take a stand for what they know to be right and speak out the truth.”

“I’m not the righter of wrongs, I’m not the avenger of evils,” Vanderbeck said. “I don’t really believe in my heart that I can change the world. But I still know that taking a stand is the right thing to do.”