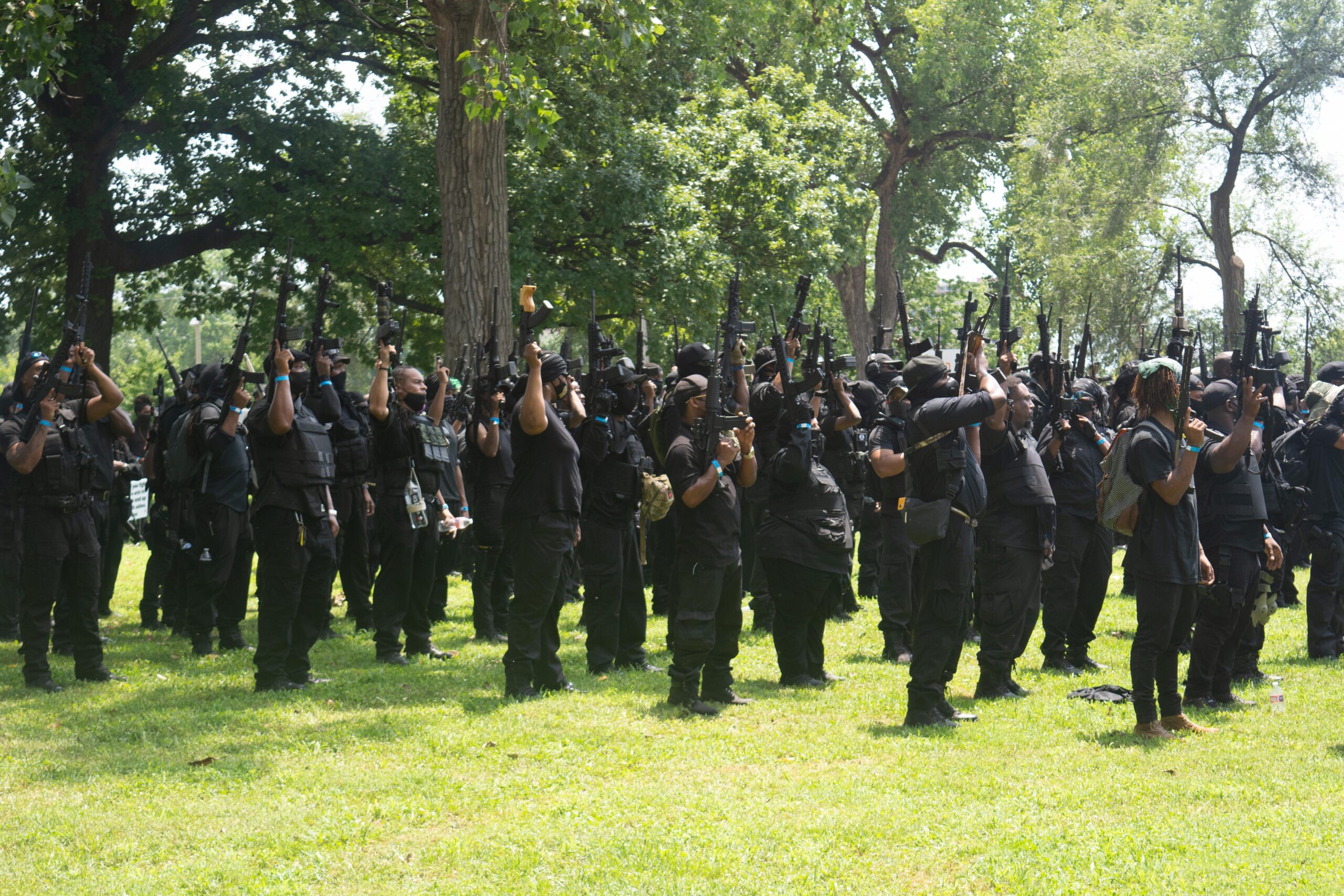 Members of the all-Black "Not Fucking Around Coalition" (NFAC) militia point firearms into the air at Baxter Park in Louisville, KY on July 25, 2020. (Ford Fischer / News2Share / Zenger)

Around 500 armed demonstrators wearing all-black uniforms marched with the “Not Fucking Around Coalition” Saturday in Louisville, Kentucky, drawing hundreds of onlookers and rival militia counter-demonstrators.

The NFAC describes itself as an all-black militia group committed to racial justice. The newly founded group has gained national attention in the past month for holding two armed marches in Georgia.

The coalition assembled at Louisville’s Baxter Park, where at approximately 1 p.m., a single accidental blast from a firearm left three people injured. The shooter and all three victims were coalition members, according to Louisville Metro Police Department Deputy Chief LaVita Chavous.

“The Louisville Metro Police Department, Louisville Division of fire, and Louisville Metro EMS responded quickly and rendered aid to all three victims,” said Chavous. “Without their quick response, this could have been a much worse situation.”

In spite of the accidental shooting, the march went on as planned. The group’s leader, John Fitzgerald Johnson, who also goes by “The Real Grandmaster Jay” and ran as an independent candidate for president in 2016, led his group into downtown.

The group struggled to keep media at a distance. “Y’all back up and give me some goddamn room please,” Johnson told a crowd of photographers, before pointing a semi-automatic rifle into the air.

“I’m gonna shoot up in the air,” he said, which repelled the journalists several feet. He lowered the weapon without firing it.

Following an approximately half-mile march, Johnson addressed the crowd with a 50-minute-long speech. He plainly warned Louisville that if there “aren’t answers” in the death of Breonna Taylor within four weeks, his group would “burn this motherfucker down.”

Breonna Taylor was a 26-year-old black woman shot and killed by police officers in a no-knock raid on her home by the Louisville Police Department in March. The shooting sparked nationwide protests. One officer has been fired, but none have been charged.

Ahead of the coalition’s demonstration, a group of  about 100 people affiliated with Three Percenters militias, styled as “III%ers,” also assembled in downtown Louisville to counter the coalition. The name refers to the unconfirmed historical theory that only 3% of the population of the American colonies participated in the revolution against Britain. It is now used by right-of-center non-government militia groups in the United States.

The right-wing activists assembled and were led by Tara Brandau, who heads a Kentucky-based militia called “Wild Card III%.”

Brandau—who prefers to go by her in-group call sign “Hoggirl”—said that her group’s goal was to ensure that “things remain peaceful.”

“The NFAC, I don’t really have a view of them,” she said. “As long as they stay peaceful, I’m fine with them doing their 1st and 2nd Amendment,” referring to the amendments that protect the right to speak freely and carry arms.

While the group presented itself as a neutral peacekeeping force, an online graphic spread by the Three Percenter groups told militias to come “stand against the NFAC!”

A handful of unarmed protesters confronted the right-wing activists early in the day. Police had arrested two people by the time authorities put up barricades separating the militia group from other protesters.

Chavous confirmed a total five arrests had been made throughout the day, with charges including “disorderly conduct, obstructing a highway and menacing.”