Hipster chic landed this pair of octogenarians on the pages of the Taiwanese editions of Vogue, GQ, Marie Claire and Cosmopolitan. 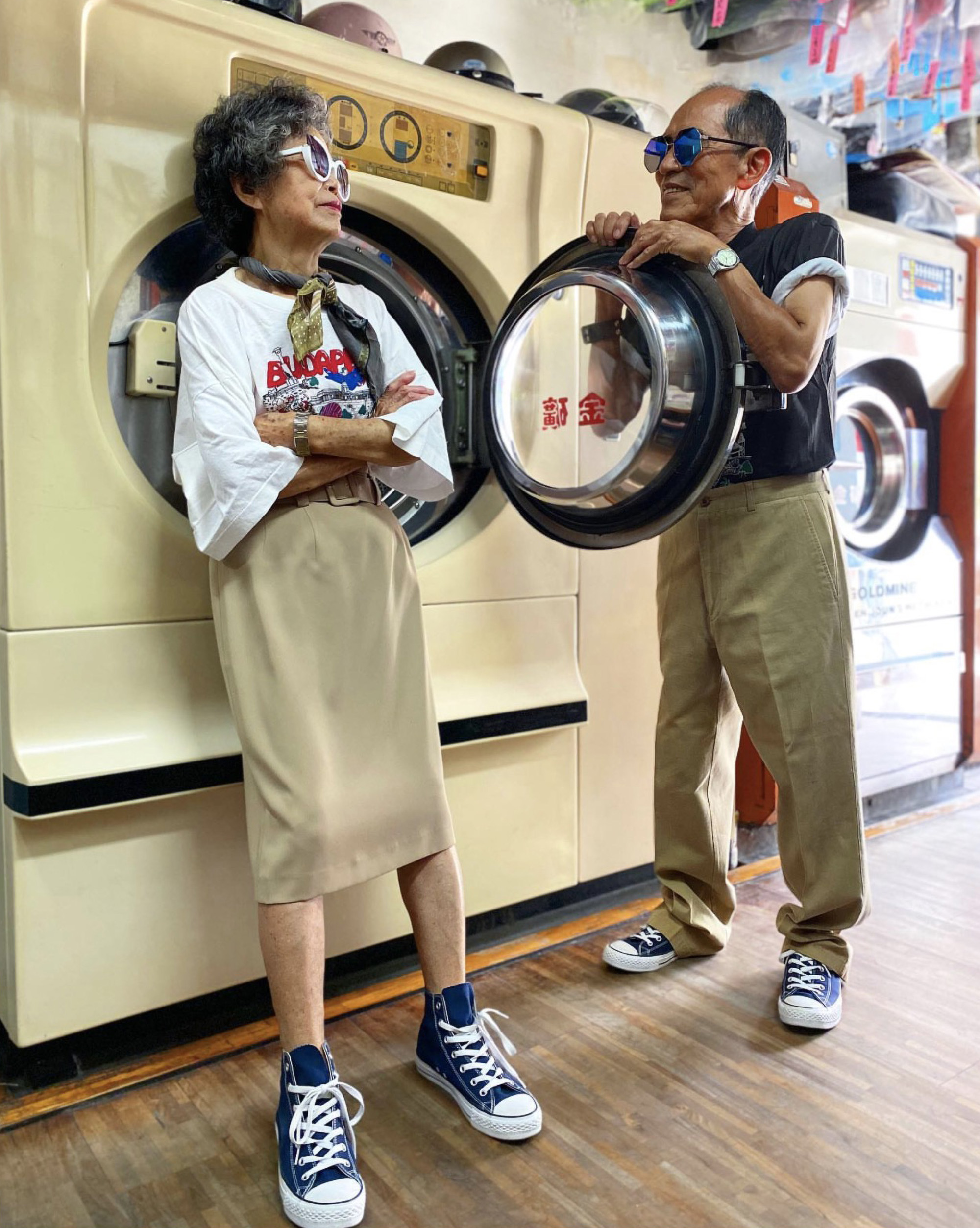 Pics Shows: Taiwanese laundry business owners Wan-ji Chang (R) and Sho-er Hsu (L) modelling in clothing left behind by customers; The elderly owners of a decades-old dry cleaning business in Taiwan have suddenly found themselves featuring in the world’s leading fashion magazines after they began stylishly modelling old clothes left behind by their customers.

An elderly Taiwanese couple has become fashionistas using clothing left behind by customers at their dry-cleaning business in Taiwan. The fashion-forward couple, in the western coastal city of Taichung, has amassed 122,000 followers since their Instagram account, wantshowasyoung, went live two weeks ago. Part of their social media handle, “Want Show,” is a play on their shop’s name, Wansho, which itself contains elements from their names, Wan-ji and Sho-er.

They’ve found themselves modeling for the Taiwanese editions of major global fashion magazines, including Vogue, GQ, Marie Claire, Cosmopolitan and the Hong Kong edition of Esquire.

Pictures on their Instagram page show Wan-ji modeling oversized suit jackets and shirts that would fit right into a hipster’s wardrobe. Meanwhile, Sho-er looks just as comfortable in a tan suit as she does in a T-shirt, skirt and Converse trainers. Despite having never modeled before, the Taiwanese couple seemed perfectly at ease in front of the camera, even in full activewear and bucket hats left behind by former clients.

Wan-ji Chang, 83, and his wife, Sho-er Hsu, 84, have been the proprietors of the Wansho laundry shop in the city’s Houli District since 1951. Chang opened his own dry cleaning shop in his native Houli, which used to be a rural township before it was upgraded to a district of Taichung in 2010, at the age of 14. Wan-ji did not study beyond primary school and went on to work briefly as an apprentice in a laundry service before it closed down.

A young Wan-ji met his future wife during a date arranged by neighbors and family members. They married in 1958 when he was 21 and she was 22. It was their  grandson, Reef Chang, 31, who came up with the idea of bringing their traditional dry-cleaning business into the digital age.

His grandparents had kept old clothing for decades after the items were cleaned but, for one reason or another, never collected. Reef figured it was finally time put the piles of forgotten clothes to good use.

“I have spent a lot of time in my grandparents’ shop since I was a child and was aware of the problem that so many people never return for their cleaned clothes. I was hoping with this move to give people a nudge to make them remember to pick up their clothes, or at least help find a new use for the clothes,” Reef Chang told Zenger News.

The sudden stardom of his grandparents came as a huge surprise to him, and, of course as an even greater surprise to the leading characters themselves.

“The first thing they said when I suggested it was, ‘We are so old and ugly, does anyone really want to see it?’ They may not even really comprehend that they are famous now, but they are very happy about the many netizens who encourage and praise them. It’s as if they have gotten thousands of new grandchildren all over the world,“ Reef said.

Another side effect is that the elderly couple is regularly recognized in the street and greeted by total strangers.

Their regular customers also seem to spend more time in the shop or on the phone chatting, Reef said. Other than that, life hasn’t changed dramatically for Chang and Shu.  They still go about their business as they did two weeks before, or two decades before, for that matter.

Reef’s grandfather describes himself as a single-generation business owner who has yet to pass his dry cleaning shop to his children or grandchildren.

“At first my grandparents were really embarrassed by the idea, but I think they’ve now gotten used to the publicity and to people recognizing them on the street,” Reef said, adding he wanted to put a spark back into the lives of his grandparents. “But many of their old friends are no longer around. That’s had an effect on them psychologically, so they tend not to go out much anymore.

“It’s hard to watch the life of your grandparents becoming boring and repetitive. I couldn’t bear to see them sitting in a daze every day and really hoped to give them some changes and fun in their later life.”

The Chang family lives above their laundry service, while over the decades the shop floor has been something akin to a salon where neighbors and old acquaintances gather for a chat.