Churches vandalized across the US

‘Every last bit of it is driven by hatred,’ said the president of the Catholic League. 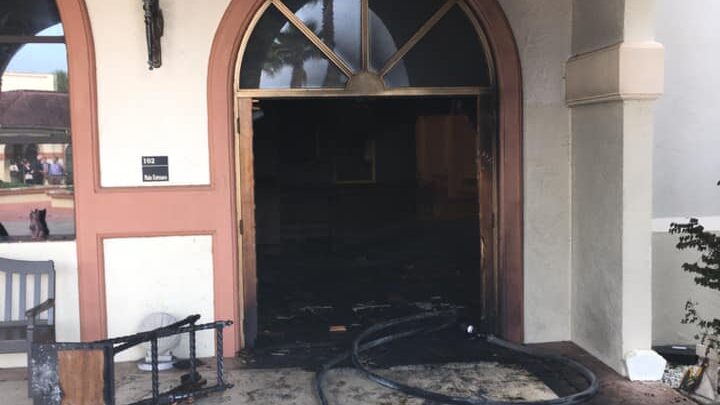 A rash of vandalism at churches has left a statue of Jesus Christ headless and some set ablaze.

The reports come amid a national debate over what to do about offensive and controversial statues. President Trump signed in executive order in June vowing criminal prosecution for anyone who damages a monument or memorial, including religious property.

The incidents could be considered a hate crime, Archbishop Thomas Wenski of Miami said. He said he’s not surprised to see a wave of attacks on places of worship.

“Just as our Jewish brothers and sisters are always very concerned about any incident of anti-Semitism, even if it instigated by someone who is mentally unbalanced, they immediately become very vigilant,” he said. “Catholics, we have to be vigilant also.”

More than a dozen churches across the U.S. has been vandalized in recent weeks, including a Florida church set ablaze by a man who crashed his vehicle into the building.

“This white van came towards me, did a U-turn, jumped the pavement and crashed into the, broke into the two front doors of the church. He’d gotten inside the narthex, put ten gallons of gasoline on the floor, set it on fire and came out. And I was face to face with him like this. And he jumped into his car and off he sped,” the Rev. Patrick O’Doherty said in a video shared on the Queen of Peace Catholic Church’s website.

Police arrested 24-year-old Steven Anthony Shields and charged him with attempted murder and arson, among other charges. Shields has previously faced assault and drug possession charges. He is being held without bond.

No one was hurt in the attack, according to the Marion County Sheriff’s Office.

Artwork hanging on the walls was “severely damaged” and needed to be replaced, but relics were “one of the few things that didn’t burn,” O’Doherty said in the video.

“I take the attack on the church as a sign we’re doing the right thing here,” he said.

Since then, a statue of Jesus Christ was decapitated in Miami. An antiabortion memorial was damaged in New York. Virgin Mary statues in Colorado, Massachusetts and Tennessee were desecrated. The doors of a church in Connecticut were painted with “anarchist and satanic symbols,” the Archdiocese of Hartford said in a Facebook post. A crucifix in Illinois was also vandalized in early July.

Other places of worship were vandalized during the protests following George Floyd’s death, including St. John’s Episcopal Church near the White House and St. Patrick’s Cathedral in New York City.

“Everything started with George Floyd, and then of course it spun out of control,” Catholic League President Bill Donahue said, pointing to the police killing of an unarmed black man in Minneapolis and the ensuing calls for the removals of statues that are seen as racially insensitive as a possible motive.

In California, several statues of St. Junipero Serra, an 18th century Spanish missionary, were removed by protesters or local authorities amid a reexamination of the missionary’s treatment of indigenous people. Pope Francis canonized St. Junipero during a visit to the U.S. in 2015.

“There is no question that California’s indigenous people endured great suffering during the colonial period and then later faced the horror of government-sanctioned genocide under the nascent State of California.  This legacy is heartbreaking.  Yet, it is also true that while Fr. Serra worked under this colonial system, he denounced its evils and worked to protect the dignity of native peoples.  His holiness as a missionary should not be measured by his own failures to stop the exploitation or even his own personal faults,” Bishop Jaime Soto, of the Roman Catholic Diocese in Sacramento, said in a July 5 statement.

It’s not always those who have been critical of places of worship who are accused of desecrating them. Sometimes it’s an inside job.

An organist at St. David’s Episcopal Church in Indiana was arrested after an anti-gay slur, swastika and “Heil Trump” was graffitied on the exterior of the building after Trump’s election.

A member of Hopewell Missionary Baptist in Mississippi was charged with setting fire to the church before Election Day in 2016.

The issue is not exclusive to the U.S. It’s happening in Europe, too.

A January news release from the French Ministry of the Interior said “the actions counted mainly consist of attacks on religious property.”

«Previous Post
Spanish architect recreates the ‘Running of the Bulls’ with Playmobil»Next Post
WATCH: Militia groups face off in Louisville