And in the process, the Ellesøes expanded the list of names other Danish families can use. 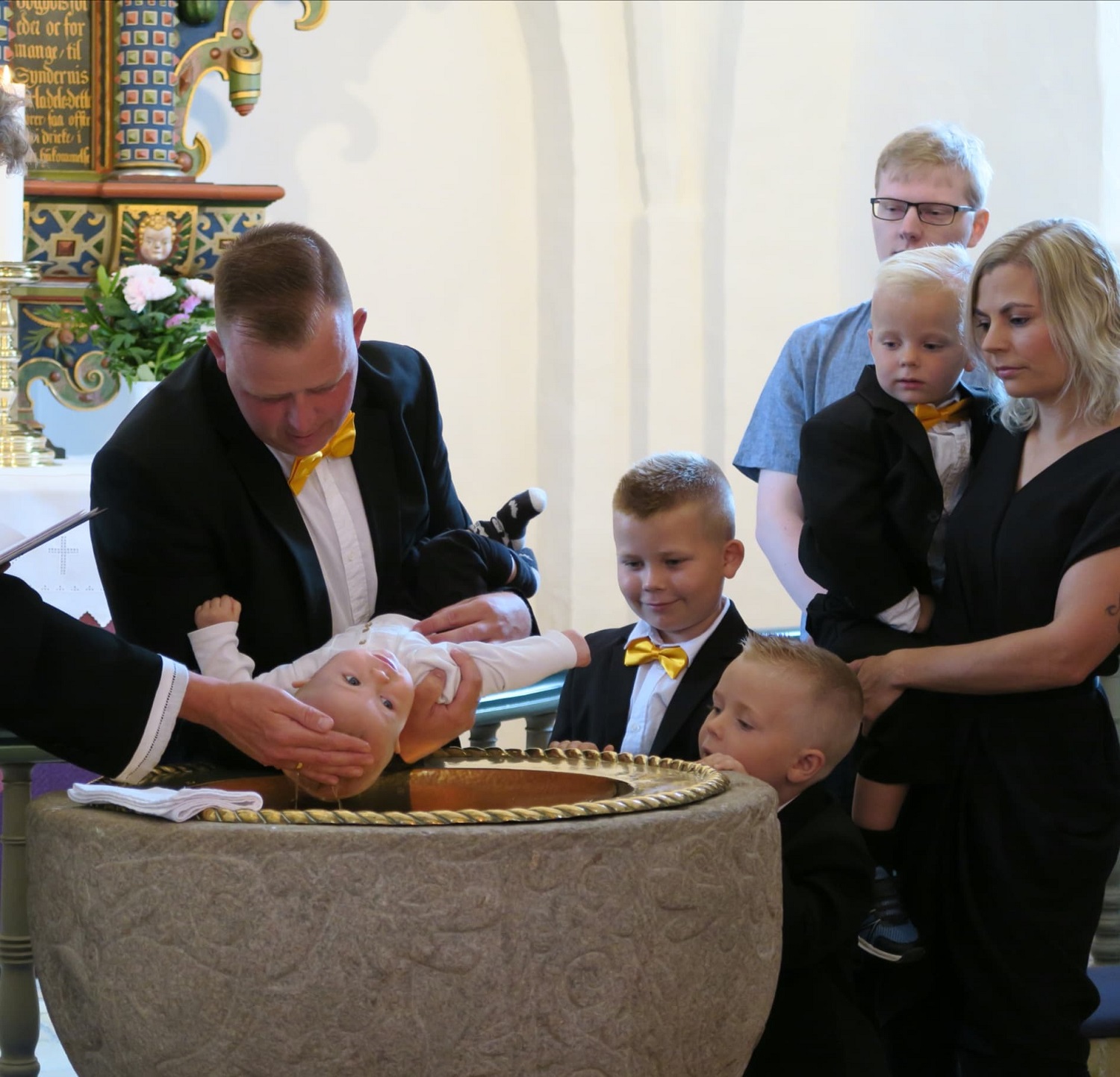 Clayson is baptized as the family looks on. (Newsflash)

The first names of Christoffer and Camilla Ellesøe both begin with C, so it’s not surprising that the Danish farming couple would want their children’s names to do the same. What is a bit unusual is the first names they gave to all four of their sons are the makes of tractors that begin with that letter.

Camilla is a farmer and Christoffer works as a civil engineer and contractor in Torrild, in east-central Denmark. The tractor-related names came after the couple was unable to agree on a name for their firstborn. Denmark’s Law on Personal Names limits first names to a list of approved names. There are roughly 18,000 female names and 15,000 male names to choose from, according to the Danish National Archives (Rigskivet).

“We couldn’t find one on the name list which we thought was nice, and as the baby was going to be a boy, Christoffer suggested Case after the tractor,” she continued. “I told him we couldn’t call our son a tractor, but promised I would think about it.”

As Camilla mulled over the idea, it grew on her and she gave it her OK—as did the Danish government. (While the names of the first three boys have been approved by the government, the fourth is still pending.) But if the boys don’t dig their given first names, all four were given conventional middle names that also begin with C.

The couple admits the tractor-oriented name game got trickier as sons kept arriving. They settled on Claas when the second son came along without hesitation. “But when we had son number three, we had to search the internet, [and] then [we] came to Cormick (named after McCormick),” Camilla said. “When we then discovered we were going to have another boy, we were really on the brink. Eventually we found Clayson,” a Belgian make.

The couple doesn’t plan to have any more children, but if another were to come along, they won’t have a problem because they’ve “carried out research and have some ideas in mind,” Camilla said. That said, the couple declined to reveal any specific possibilities.

“Our family and friends have welcomed the names,” she said. “And if we meet new people who ask where their names come from and we say it’s from a tractor, then they are always laughing.”

The four tractor-named boys from Torrild are not the only examples of colorful Danish concept-siblings names. A car dealer from Silkeborg, for example, named his three daughters after his favorite cars: Mercedes, Carrera and Lotus.

Indeed, lots has changed since Denmark liberalized its approved-names list in 2006. For instance, it now allows unisex names, allowing 1,054 such monikers thus far. Unusual approved first names for girls include Aloha, Amen and Ninja, while for boys, it’s Awesome, Cobra and Gandalf.