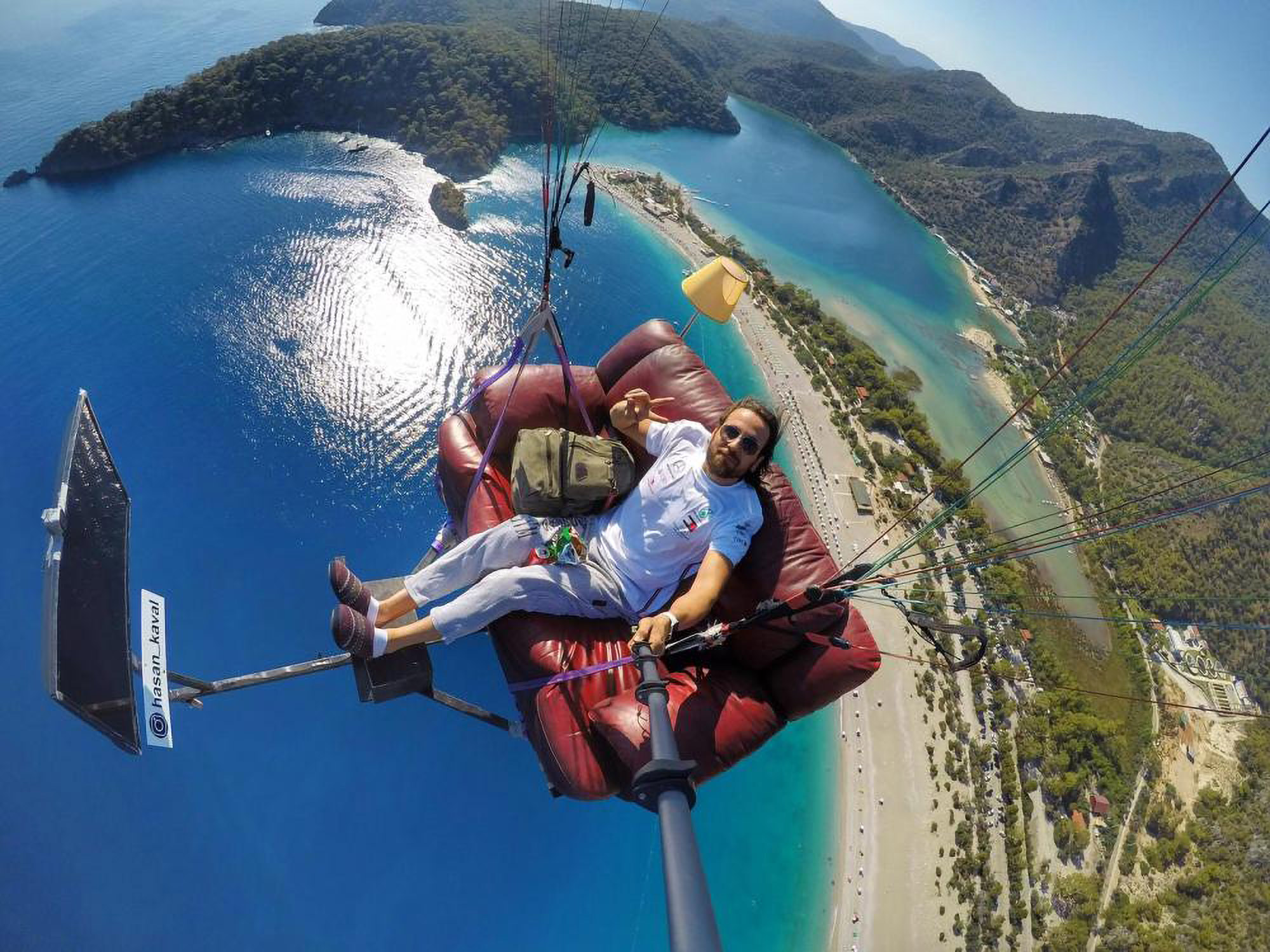 Lounging on the sofa and eating chips while watching TV may well be a favorite pastime during the current pandemic. Even from an altitude of 6,500 feet.

That’s what “couch potato” paraglider Hasan Kaval did earlier this month as he reclined on a red sofa in his “living room,” with a lamp, a bag of chips and a TV for viewing “Tom and Jerry” cartoons.

The paraglider is seen in his video drifting high above the Ölüdeniz, Hisaronu and Ovacik resort areas on Turkey’s southwestern Turquoise Coast, in the Fethiye district. The area is one of the most popular spots for paragliding year-round due to stable weather conditions.

The 29-year-old Turkish influencer posted video of his leisurely ride on Instagram, where it has been viewed some 175,000 times, and on YouTube, where it went viral with 1 million views.

The full-time paraglider instructor’s two-year project came together on July 2 during his first attempt.

“This was the first flight with a sofa. I didn’t do a practice run,” Kaval said. “I use logic and calculate everything in advance. That was a real sofa, and the battery-powered TV was quite heavy.

“I wanted to reflect the comforts of home while shaking things up. I ate crisps in the air and drank Coke.”

Along with his video, Kaval posted a message thanking “my flyferhat1973 brother who supported me from the beginning to the end of the project with equipment and tools.”

As Kaval approaches land, his video shows him pulling levers as he safely lowers his craft on a public square in Fethiye. He stands, smiles at the camera and continues eating chips.

“I have many crazy ideas spinning around my head,” said Kaval. “Paragliding shows the world beyond the normal.”

Kaval, who said by trade he is a pita kebab master, started working when he was 10 and remained a kebab master until he went into the army.

“However, I decided that life was not for me. I was curious about aviation and was pulled towards paragliding. I had just started practicing before going in the army.”

He taught himself how to paraglide and was fully licensed within five years.

“I passed all the tests the first time round,” Kaval said.

“In 2015, I took my equipment to Iran. I played backgammon in the air and smoked from a hookah.”

The free spirit spends summers in Fethiye and winters in Denizli, about 112 miles (181 kilometers) north of Fethiye.

“I love horses, and I’ve lived in a trailer for the last three years,” said Kaval, who is single.

As for his most recent paragliding adventure, Kaval proudly says, “I did it alone, it was very enjoyable, being in a ‘living room’ high above the world. The most valuable living room there is.”