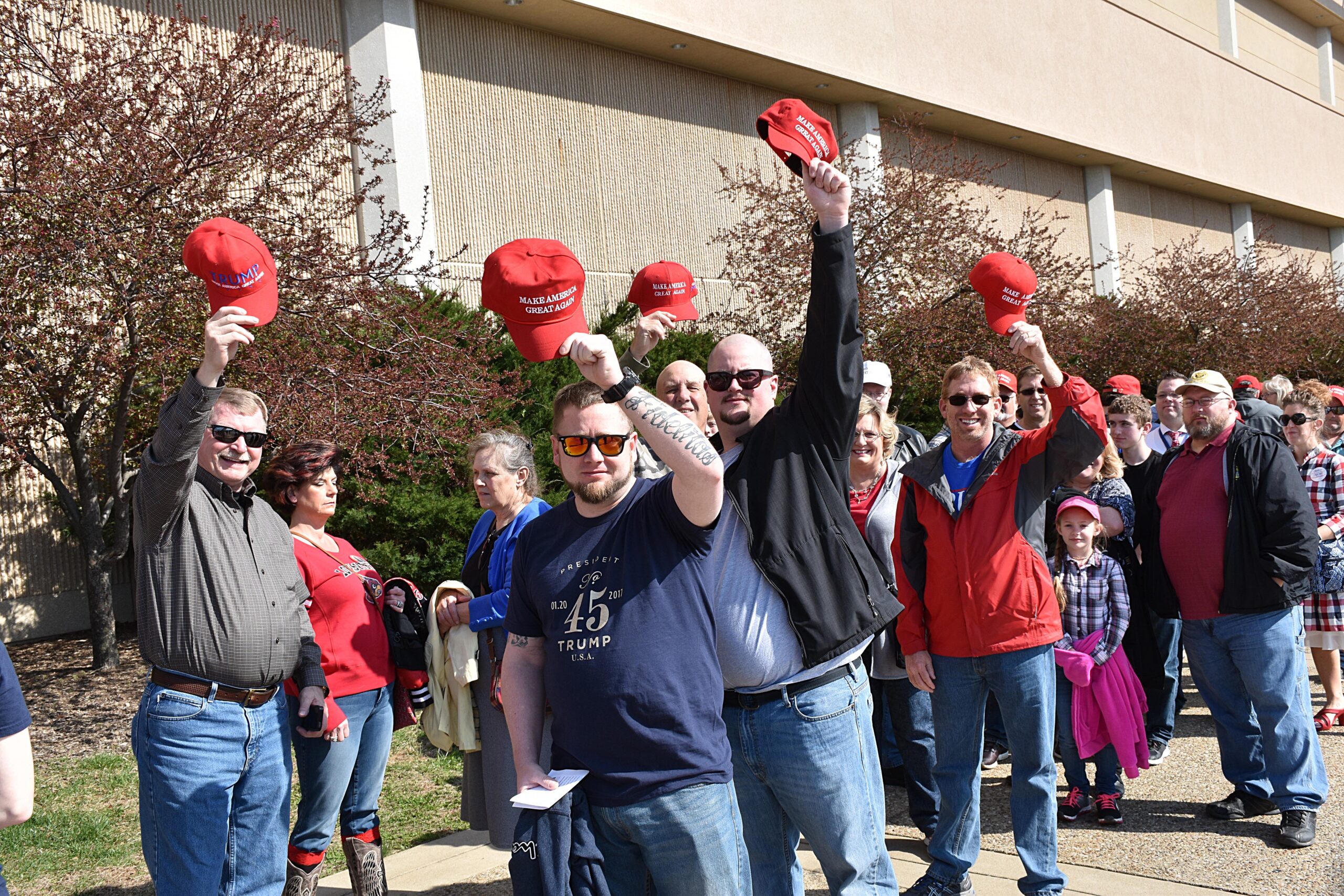 Presidential Donald Trump's supporters gather for a rally in Louisville, Kentucky on March 20, 2017. (David Martosko/Zenger)
More swing-state voters are registering Republican than Democrat, a data firm allied with Democrats found.
The U.S. parties register voters using different methods — and the ways favored by Democrats have been hampered by lockdown measures in Democratic Party-led cities and states in the first months of the pandemic.
Republicans hold a 1-point advantage in battleground districts, according to Republican campaign data, but experts debate whether their surge in voter registration in swing states will allow the party to hold that lead as measures to control Covid-19 ease. The U.S. presidential election is 109 days away.

The coronavirus pandemic crushed voter registration as turnout was expected to be at an all-time high in the 2020 election, according to a TargetSmart report from late June. A memo from the same month, from the National Republican Congressional Committee, House Republicans’ campaign arm, noted “a generic Republican candidate holds a one-point advantage over a generic Democratic candidate.”

“The Democrats are particularly disadvantaged by this. Registration is a big thing for both sides. But take certain states, take Texas or Florida, in order to be competitive in those states, the Democrats have to register a lot of voters,” said Daron Shaw, a government professor at the University of Texas in Austin.

What was less clear from the report was why Democratic voter registration had taken a bigger hit than Republican signups.

Experts say methods typically used by Democrats have not been feasible during the pandemic. Social distancing, college campus closures and event cancellations meant Democrats were unable to knock on doors or persuade potential voters to register in person.

“Democrats tend to be more interested in registering younger voters, college students, racial and ethnic minorities. The data they have relied on in the past has demonstrated that personal, face-to-face contact tends to be particularly effective at registering those communities,” Shaw said.

Republicans rely more on digital and mail outreach to their constituency, and older voters, who are more likely to be Republican, are more responsive to mail registration efforts than younger voters, who lean Democrat, Shaw said.

“Everybody has the same bag of tricks,” he said. “The question is what’s the relative mix.”

Mike Mikus, a Democratic strategist in Pennsylvania, said Republicans have been more likely to gather in groups during the pandemic, which would allow in-person voter registration efforts to continue—but also said their success “could be just the absence of activity on the Democratic side.”

Phone banks and digital advertising could help overcome the obstacles of not being able to register people in-person, he said.

Though Republicans had the edge in the first few weeks of the pandemic, as described in the June report, the trend has since been shifting in favor of Democrats, according to TargetSmart CEO Tom Bonier. Democrats have had “a pretty significant resurgence,” he said. The change is expected to be documented in TargetSmart’s next report in late July.

“What we saw, at least in the early weeks of the pandemic in voter registration trends is very consistent with what we’ve seen with how the pandemic has impacted different communities, just in terms of hospitalization rates, mortality rates and the urban areas and communities of color have especially been hit harder. So it’s not necessarily surprising to see that also reflected in voter registration,” Bonier said.

Experts cited protests in wake of the May 25 killing of George Floyd, an unarmed black man who died after a Minneapolis police officer knelt on his neck for nearly nine minutes, and President Trump’s handling of the coronavirus pandemic as fueling registrations among Democrats.

Brandon Scholz, a Republican strategist in Wisconsin, said he’s not surprised to hear Democrats are rebounding.

“They got waxed,” Scholz said of Republican turnout during the presidential primaries in Wisconsin, acknowledging that the party had an uncontested incumbent on the ballot. “Democrats have all the reason in the world to vote against Trump. They have such a seething hate of Trump. It’s just so passionate that it doesn’t take much to get them” to the polls.